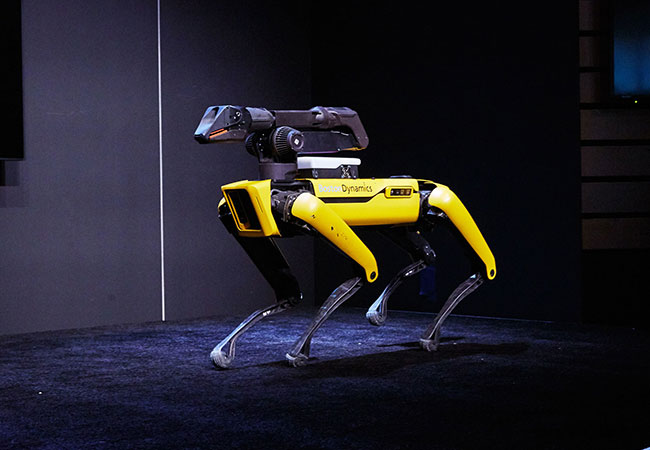 Ten of these canine-inspired robots, weighing 30 kg each, were required to perform the task, sources say. Although the vehicle was in neutral gear, a driver was on the vehicle’s wheel, presumably to prevent accidents.

“These spot robots are coming off the production line now and will soon be available for a range of applications,” the video-read caption hinting at a possible commercial machine debut.

An individual SpotMini can carry only 31 pounds. It only takes 10 of the 66-pound robots— hitched like metallic sled dogs and marching with military precision — to get the vehicle rolling.

Boston Dynamics says SpotMini performs some tasks independently, such as navigating a previously mapped warehouse, but relies on its owners for “high-level guidance.” Unlike Boston Dynamics ‘ Spot, SpotMini is slightly smaller. At 0.84 meters or less than three feet, it’s as tall as a big dog. Previously, SpotMini was tested for multiple applications, including dancing to popular music and opening doors using its flexible, mechanical arm.

At last year’s CeBIT computer expo in Hanover, Germany, Boston Dynamics founder Marc Raibert said that his company was already testing SpotMini with potential customers from four separate industries: security, delivery, construction and home support. Raibert also predicted that one day his company’s robots could be used for “warehouse logistics” or even to clean up hazardous environments like the Fukushima Daiichi nuclear disaster site, where human workers are at risk.