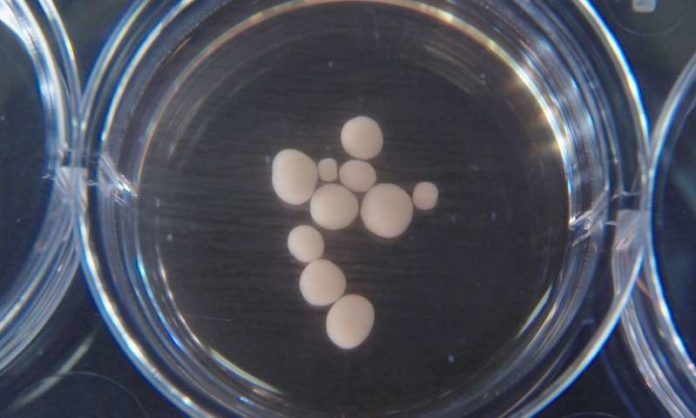 Brain organoids have been around since about 2013. Sometimes called cerebral organoids, brain organoids are miniature brains created in the lab from human pluripotent stem cells.

A group of biologists, headed by Alysson Muotri at the University of California, San Diego, had grown brain organoids about the size of a pinhead. Each of them produced the same chemicals, and electrical signals as those cells do in our brains. They packed the organoids aboard a rocket and sent them to NASA’s International Space Station in July to see how they develop in zero gravity.

They were placed in a metal box along with bags of nutritious broth. Now, they are replicating rapidly, and for the first time, the researchers have recorded simple brain waves in these organoids. The researchers found these waves change in ways that resemble the changes in the developing brains of premature babies.

Some researchers say that these brain waves are a sign that organoids could be capable of consciousness! They fear that if the experiments continue, it might potentially mean creating self-conscious, human-like beings. Notably, laboratories around the world currently grow brain organoids, offering scientists a new window onto the earliest stages of human brain development.

In one recent experiment, scientists linked a brain organoid and a spider-shaped robot, so that the two could exchange signals. The computer acts as a brain-computer interface (BCI) (sometimes called a neural-control interface – NCI), translating electrical signals from the organoids. The computer then assigns a function (to walk, for example) to the signal and feeds that information to the robot. As a result, the robot begins to step forward.

While approaching the wall, the robot used sensors that determine its location. The computer transmitted these signals to the organoid in the form of electrical pulses. To date, scientists can not yet say whether these experiments will affect the further development of organoids. Or, Organoids, coupled with robots, will ever become self-conscious like humans and be a danger to the human species. Only time will tell.

Notably, Elon Musk’s company, Neuralink is making incredible progress in building technology that allows humans to access more of their brain functions. The company develops interfaces between brains and machines. A paralyzed person can, for instance, use a BMI to move a cursor or robotic arm. These options allow them to maintain greater physical freedom.

Although Musk’s technology is in its early stage, the company has already built two prototypes that are capable of recording the brain’s activity across multiple regions of the cortex. One features 1,536 recording channels, while the other has 3,072. During a live presentation, Max Hodak, president of the company, said that it would test the new technology next year on five paralyzed people to see if they can use it to move a mouse cursor and type with their brains. So far, Neuralink has only been tested on rats. The research community is nevertheless waiting with anticipation for the outcomes of the company’s planned human trials.