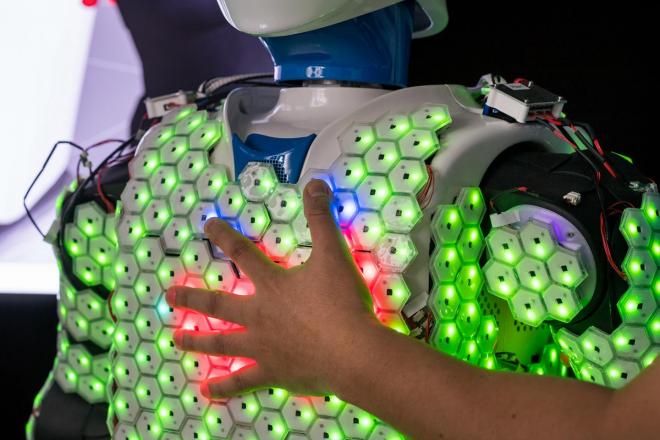 Artificial robot skin has been of great interest to scientists since the early days of robotics. The goal was to enable robots with a sense of touch similar to that of humans, allowing robots to be fully physically interactive and adequately safe to be near humans.

However, the development of such artificial robot skin systems was challenging, as it involved a large number of spatially distributed discrete sensors and transmission of a large amount of data. With the new development of skin cells, dynamic routing, and load balancing, robots can now sense like humans.

A team of robotics scientists at the Technical University of Munich (TUM), Germany, has developed an autonomous humanoid robot named H-1 Robot with full-body artificial skin, making it capable of sensing its own body and surroundings.

The biologically-inspired, synthetic skin, coupled with control algorithms, is made up of hexagonal cells that are about one inch in diameter (which is close to a two-euro coin). Each one of the hexagonal cells consists of a microprocessor and sensors, which help detect contact, acceleration, proximity, and temperature.

Created by Prof. Gordon Cheng and his team, the artificial skin covers the soles of the feet of the H-1 Robot. IEEE published the research in the journal Proceedings.

Notably, Gordon Cheng developed the skin cells ten years ago; however, the biggest obstacle in developing robot skin was computing capacity. Human skin has around five million receptors, and it has been a challenge to recreate it in robots. The previous systems quickly overload with data from just a few hundred sensors.

To solve this problem, Cheng and his team at TUM decided not to monitor the skin regularly, but rather with an event-based system. It reduces the processing effort by up to 90 percent. The individual cells transmit data from sensors only when values change. It is similar to the way the human nervous system works.

With their event-based approach, Cheng and his team have successfully applied artificial skin to a human-size autonomous robot that doesn’t require any computation externally.

The H-1 Robot is mounted with 1260 cells (ie, more than 13000 sensors) on its upper body, legs, arms, and the soles of its feet. With its sensitive feet, H-1 can respond to uneven floor surfaces and also balance on one leg. With its unique skin, the H-1 can even hug a person safely. When it hugs a human, its sensors calculate the correct movements to make and how and where to exert the correct pressures.

Gordon Cheng said, “With its special skin, the H-1 can even hug a person safely. Robots can exert forces that would seriously injure a human being. During a hug, two bodies are touching in many different places. The robot must use this complex information to calculate the precise movements and exert the correct contact pressures. It may not be important for industrial applications. But in areas such as nursing care, robots must be designed for very close contact with people.”

The team is now working on creating smaller sensor cells which could be produced in bulk.

Robotic solutions: The next phase of Lean Manufacturing