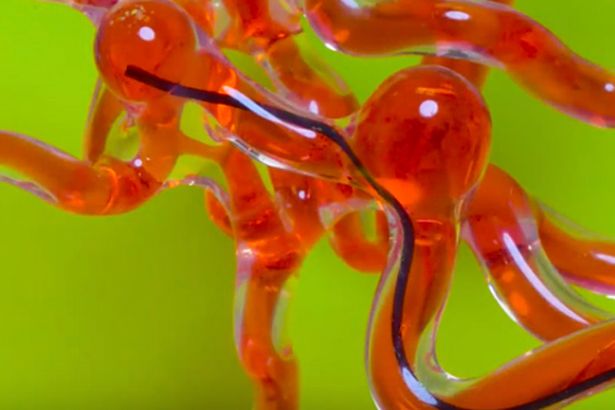 Treating blood clots and aneurysms (weakening of blood vessel wall) in the brain can be a struggle between life and death. It requires highly-skilled operations in hospitals with more advanced facilities.

But in a significant medical breakthrough, a team at the Massachusetts Institute of Technology (MIT) has designed a tiny snake-like robot, less than a millimeter thick, that can crawl through the human brain, diagnose and treat blood clots and aneurysms.

In a study published in Science Robotics, researchers demonstrated that the robot could navigate through a brain model riddled with aneurysms without getting stuck. The robot was designed to crawl through the narrow, twisting veins in the brain, and perform small-scale procedures.

Unlike other snake-like robots that often use hydraulics, this robot uses flexible magnetic materials, called ferromagnetic domains, to move around. Since it does not need to expand or contract to move forward, it can easily get around the brain’s small, fragile vein structure.

According to MIT researcher and lead author Yoonho Kim, the robot is covered in a layer of hydrogel slime that allows it to travel with as little friction as possible. “If you don’t have the lubricating layer, it’s getting stuck easily,” he said. Earlier robots, made of other materials, including rubber, often faced these types of problems due to friction moving around tight spaces.

Now, the next big step is to test the robot on humans, with soon expected animal tests. Before human trials, the team needs to ensure that the robot is biocompatible with human bodies. As hydrogels are water-based and have previously been shown to be non-toxic, Kim is confident that the bot will not cause any harm.

If everything goes well, the device can help diagnose aneurysms before they burst, and even remove blood clots by using laser technology to help cut blockages that might otherwise cause a stroke. The procedure would be minimally invasive because to insert the device; doctors would only need to make a small incision.