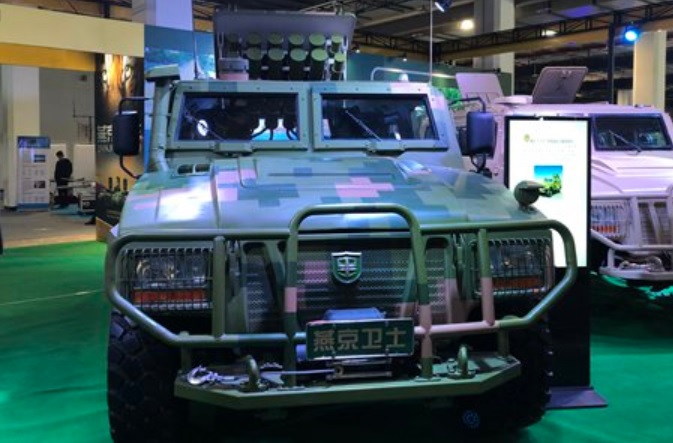 China unveiled the multi-purpose drone launching armored vehicle at the Beijing Civil-Military Integration Expo 2019 in May. Developed by Beijing Zhongzi Yanjing Auto Co Ltd, this off-road vehicle uses an “integrated missile-vehicle technology” that carries 12 pneumatic launch tubes that fire drones into the air, which then spread their wings and become operationally controllable.

Usually, these launch tubes are hidden inside the vehicle and revealed only when used. It provides an element of surprise as it will be difficult for enemies to distinguish between drone launch vehicles and standard vehicles. Four of the twelve drones that the vehicle can launch are the smaller SULA30 reconnaissance drones that can stay in the air for over an hour. They can send information to a command center in real-time.

Designed to destroy mobile light armored vehicles, field fortifications, and armed personnel in cover, they can carry more than two kilograms of explosives each. They can launch accurate suicide attacks once they locate their targets, diving at speeds of 180 kilometers an hour, according to the company’s statement.

Meanwhile, the new suicide drone from Taiwan appeared at the Taipei Aerospace & Defense Technology Exhibition biennial in August 2019. According to the aviation news website Alert 5, it is “an air-to-ground strike assault UAV,” citing information from the show. The Fire Cardinal twin-propeller is about four feet long, has a wingspan of six feet, and weighs about 15 pounds. It includes an electro-optical and infrared sensor and uses what Alert 5 described as an “intelligent system for object detection” to select its target.

This unmanned aerial vehicle is very similar to the U.S. The hand-launched Puma monitoring drone from the army. At an altitude of 500 feet and a maximum speed of about 50 miles per hour, the propeller-driven Puma can range up to 10 miles. A human operator controls a Puma via radio.

Ground troops near enemy forces could launch these drones into the air in the hope of overwhelming the short-range air defenses of the enemy. That’s the tactic used by Middle East militant forces with their own, custom-made suicide drones. In January 2018, two Russian bases in western Syria were attacked by a swarm of 10 explosives-laden small drones, apparently controlled by Syrian rebels.