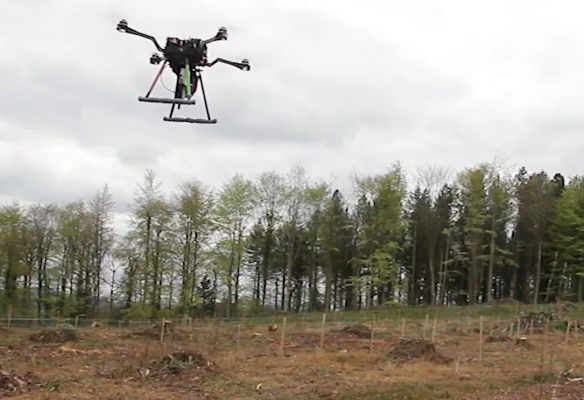 In a mission to prevent deforestation throughout the globe using technology, UK-based Biocarbon Engineering has developed drones that can plant trees on a massive scale. They built ten drones capable of planting 400,000 trees a day. These tree planting drones, designed by an ex-NASA engineer, launch ‘seed missiles’ into the ground and they grow less than a year later by 20 inches tall.

The start-up, which uses drones to plant trees and grasses in Australia’s abandoned mines, worked with the Worldview International Conservation Foundation in Myanmar to replant mangroves. The company planted seeds in Yangon, Myanmar on September 2018, and the seeds have now become mangroves. It offers compelling new evidence that drones can be deployed on a much larger scale.

“We now have a confirmed case as to what kind of planting we can do and under what conditions we are now ready to increase our planting and replicate this success,” said Irina Fedorenko, co-founder of Biocarbon Engineering.

Drones first fly over the area to map it, collect data on topography and soil conditions to be combined with satellite data and analyzed to identify the best locations to be planted for each seed. Then the drone, filled with germinated seeds and nutrients, burns biodegradable pods to the ground. Several conditions must be right in order for the process to succeed in the mangrove forest; for example, if the tide comes in unexpectedly, the seeds could be washed away. Biocarbon Engineering examined the best species performance and environmental conditions in the tests.

Only two operators, according to Fedoranko, could send out a mini-fleet of seed missiles planting drones that could plant 400,000 trees a day — a number that could make massive progress in combating the effects of human-made climate change. Bremley Lyngdoh, World Impact’s founder, and CEO says the area could house as many as 1 billion new trees theoretically. Worldview Impact, a non-profit organization that recently worked with Biocarbon Engineering, has planted more than six million trees since the project began in 2012.

Meanwhile, a pneumatic firing module was built in South Africa by two drone enthusiasts Andries Louw and the Australian Andrew Walker that shoot seeds into the soil. At speeds between 150 and 300 meters per second, it can spit out two seeds per second. That’s faster than the cruising speed of a passenger jet.

It is possible to attach the module, called Podder, to the bottom of popular drone models. Louw and Walker estimate that in one day a team of two flying two drones will be able to plant up to 40,000 seeds into the ground. They can plant in just ten minutes what the average human can plant.

The first module was built in the Hermanus garage. Later Louw, a certified drone pilot, and Walker, a mechanical engineer based in Sydney, founded a company called AirSeed Technologies, hoping to use their deforestation technology.