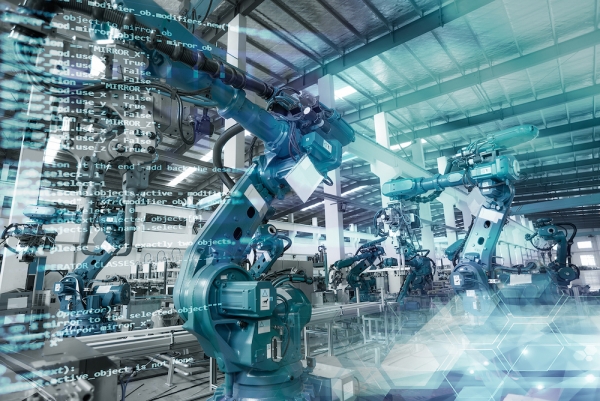 Despite their benefits and increased rate of automation in France, robots are still underrepresented in the French market. But it wasn’t always like this!

According to information available in July 1985, there were 3,100 robots in France. Though the figure was low compared to those of nearby countries, corresponding to a ratio of one robot per 2,000 workers versus 400 in Sweden and 600 in Japan, about 60.6 percent of the robots were designed and manufactured in France.

To bring together people to promote various aspects of robotics, the French Association for Industrial Robotics (AFRI) was established in 1977. It is an organization sponsored and partially funded by the Government and run by a staff of three permanent officers helped by several voluntary unpaid members.

The Department of Biorobotics at the Institute of Movement Sciences has been persuading the study of the visual system of invertebrates (especially fly and bee) and their behavior and sensorimotor control feedback loops (such as optic flow regulation) for almost 30 years.

The Biorobotics research team was one of the first to propose a model of the fly’s Elementary Motion Detector (EMD) derived from electrophysiological analysis under single photoreceptor stimulation. The team built a variety of analog and digital visual sensors for optical flow sensing and hyperacuity location of objects, including aVLSI prototype that realized an array of EMDs and also built several wheeled and micro flying robots.

The robotics and computer vision group at the Department of Computer Science and System Engineering is working on mobile robot navigation, mapping, perception, embedded vision, motor control, and human-robot interaction, with a focus on applying machine learning in real-world applications. We are working mainly on applications in assistive and service robotics, humanoid robotics, intelligent vehicles, and security.

Several members of their team are part of the INRIA/ENSTA ParisTech FLOWERS team which is focusing on developmental robotics, with the goal of applying learning algorithms to robots in healthy interactions with humans.

The ultimate objective of the research group at the Computer-Aided Medical Interventions (CAMI) is clinical. The purpose is to assist the physician or surgeon in the successful execution of diagnostic or therapeutic gestures by minimizing invasiveness while improving accuracy.

It involves the quantitative processing of multi-modal patient data and medical knowledge, the fusion of all those information, the planning of an optimal strategy for diagnosis and therapy and the ability to transfer safely and accurately this plan to the operative conditions. This last stage is performed through navigational or robotic assistance.

The primary skills of the team are in medical imaging, biomechanical modeling, and simulation, biomedical engineering, and robotics. Created in 1985, the CAMI team is a multidisciplinary team of about 35 persons (including permanent staff, Ph.D. and postdocs) coming from different disciplines (computer science, applied mathematics, biomedical engineering, robotics, medicine).

The I3S Laboratory is a joint laboratory between the University of Nice Sophia Antipolis (UNS) and the French National Centre for Scientific Research (CNRS), specialized in informatics, signals, and systems. The OSCAR team of I3S focuses on the development of the theory and technology, enabling the operation of dynamical aerial robotic vehicles.