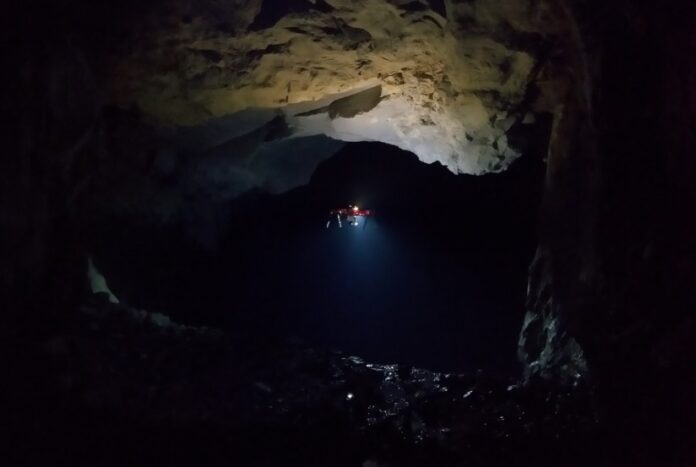 Drones come handy here for engineers to perform various mines missions, which are too “dull, dirty or dangerous” for humans. Equipped with sensors, motors, propellers, cameras, and GPS systems, they can complex mining tasks in a matter of hours with fewer man-hours, boosting productivity and efficiency.

Notably, fast technological advancements in passive and active sensors have empowered drones’ capability in various types of missions. Sensors come in different specifications depending on drone size, investigation goal, and the lighting condition.

Despite the limited resolution, infrared sensors can easily detect humans. It also has the advantage of sensing through fog, smoke, day, and night. However, the sensor images can be distorted by flame and any other high-temperature sources. Moreover, it does not work well through the thick dust.

Ultrasonic Sensors (US) are also inexpensive and uncomplicated sensors viable for various applications. The only standard sensors in the drone technology that is not based on electromagnetic waves (EM), they detect the obstacles by radiating high-frequency sound waves and collecting reflected waves. The distance to the obstacles is determined by calculating the time-of-flight. One disadvantage is that they have a shorter range compared to other sensors.

The selection of RGD camera selection needs to be done carefully, considering the drone’s energy consumption. A compact camera is preferred for fixed-wing drones in a normal situation because they cannot carry heavy devices.

The stereo camera is equipped with two or more lenses to create high-resolution 3D images, similar to the human visual system. Using separate image sensors, it can develop three-dimensional images with high accuracy in a clean environment. However, it has poor performance in fog, smoke, and dust because the light waves are distorted in such conditions.

Laser Range Finders (LRFs) are expensive sensors widely used for obstacle detection in drones. In LRFs, a laser beam is radiated to an obstacle to measure the distance to an object by receiving a reflected wave and considering time-of-flight. Since LRFs use optical wavelengths of light, it is not suitable for fog, smoke, dust, or similar adverse conditions.

Ultra-Wideband Radar (UWB) carries out obstacles detection by emitting electromagnetic waves in the radio spectrum. Similar to the US and LRFs, target distance is measured by calculating the reflected wave and times-of-flight. The radio waves have a longer wavelength than visible light and infrared, providing better penetration than visible light in the dust, smoke, fog, and other adverse conditions.

UWB also has other features that make it most suitable in mines. It has a precise and higher image resolution than the ultrasonic sensors in harsh conditions. Second, UWB uses low energy ie, less than 1 Watt. This saves considerable drone battery power. Third, UWB has minimum interference with other wireless uses like flight controller and telemetry link regarding low spectral density. Finally, UWB can detect objects with different characteristics like edges, corners, etc. It can also identify the three-dimensional coordinates of the nearest object.

Most of the multispectral imagers like Landsat, SPOT, and AVHRR detect reflectance of Earth’s surface material at several wide wavelength bands, separated by spectral segments. Lightweight hyperspectral imaging (HSI) sensors, on the other hand, assess reflected radiation as a series of narrow and contiguous wavelength bands.

Typically, these bands are measured at 10 to 20 nm intervals by hyperspectral sensors. They provide information that is not accessible by traditional methods. In general, these sensors are widely used in geology, mineral mapping, and exploration.

The visible and near-infrared (VNIR) portion of the electromagnetic spectrum has a wavelength at intervals of about 400 and 1400 nanometers (nm). This range consists of a complete visible spectrum with an adjacent part of the infrared spectrum up to the water absorption band at intervals 1400 and 1500 nm.

VNIR sensors, used on drones due to their small size and low weight, can measure surface moisture of open pits, tailing dams, underground spaces wall, and surfaces. Besides, each particulate mineral has a special signature in VNIR spectra, which is an advantage in mineral exploration by drones equipped with a VNIR sensor.

Apart from all the sensors mentioned above, specific sensors can be installed on a drone for a specific mission, for instance, to monitor air quality, gas sensing, dust monitoring, etc. Typically, air quality sensors are based on optical, ultrasound, and electrochemical sensing elements. They can be installed on a drone depending on the type of contamination, release time, and measurement requirements.