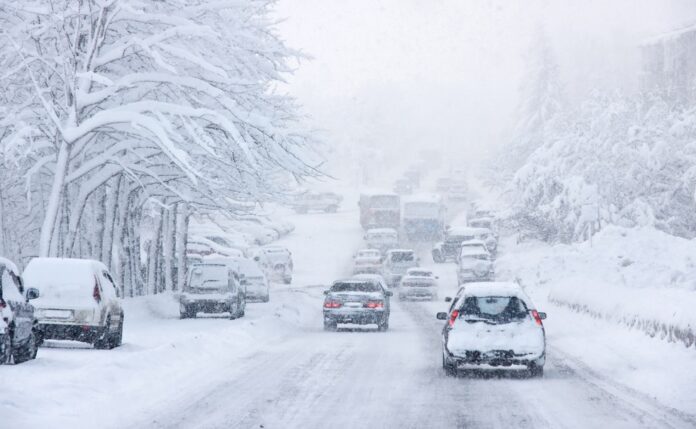 Autonomous vehicles (AVs) use various sensor technologies to perceive their surroundings and make logical decisions based on the data gathered, much like humans do.

However, adverse weather conditions (such as rain, snow, fog, poor lighting, and so on) can make it difficult for AV sensors and algorithms to extract information.

According to NHTSA, over 5,891,000 vehicle crashes occur each year, with approximately 1,235,000 caused by inclement weather such as snow, rain, fog, or strong winds. Rain is responsible for roughly half (46%) of weather-related accidents, while snow is responsible for about 17%. This post will examine the various effects of several common adverse weather phenomena on AV sensors.

Precipitation is water (liquid or frozen) that condenses in the colder atmosphere and falls back to the ground. A rain droplet can have a maximum diameter of 6 mm. If the diameter of a rain droplet exceeds this value, the air resistance combined with the droplet’s terminal velocity will exceed its cohesive force, tearing it into smaller pieces.

The size and distribution of a droplet determine the intensity of precipitation, which influences the electromagnetic signals transmitted by the mechanism through the precipitated medium. Mie scattering occurs when the transmission wavelength () is similar to or smaller than the droplet diameter of 6 mm, according to Mie’s solution to Maxwell’s equation.

Mie scattering from rain will significantly impact LiDARs transmitting in the 905 nm and 1550 nm wavebands. During various rain intensities, it can cause LiDAR visibility to deteriorate. In 2 mm/h rain, LiDAR visibility, which should have been around 2 km in clear conditions, can be reduced to around 1.2 km for the 905 nm band and 0.9 km for the 1550 nm band. When the rain rate reaches 25 mm/h, the 2 km visibility for wavelengths 905 nm and 1550 nm drops to 0.7 km and 0.45 km, respectively.

Local weather conditions have little impact on GNSS. These satellite systems operate at a frequency, approximately 1.575 GHz that is relatively weather-insensitive. The windshield wipers can sometimes interfere with reception, making it impossible for a GNSS device to identify a complete navigation data string from satellites. As a result, the GNSS receiver may not properly decode the incoming string, resulting in inaccurate data.

The intensity of image pixels is determined by scene brightness in camera systems onboard autonomous vehicles. Different weather conditions can cause sharp intensity fluctuations, resulting in image and video quality degradation. Snow and heavy rain, for example, can obscure an object’s edges, making it unrecognizable. Fortunately, some digital image processing techniques can reduce the impact of precipitation and improve the quality of images captured in changing weather conditions.

Fog is a visible aerosol made up of small water droplets suspended in the air or near the surface of the Earth. It’s categorized as a low-lying cloud. When atmospheric temperatures rise and relative humidity decreases, this weather phenomenon usually begins around midnight and lasts until sunrise.

Fog cannot form unless there is dust or pollution in the air. Droplets, ranging from 1 to 20 microns, form when water vapor condenses around these small solid particles. As a result, LiDAR systems with operating wavelengths shorter than fog particles will experience Mie scattering. Water absorption significantly impacts the NIR spectral band and the negative effects of scattering.

NIR signals can be attenuated by up to 130 dB/km and 480 dB/km in moderate continental and heavy maritime fog. Due to the extreme magnitude difference in particle to wave size, the fog would exhibit slight Rayleigh scattering on millimeter waves.

In contrast to most other sensors, ultrasonic sensors are unaffected by scattering. However, because it is a system that works with sound waves, its performance will be influenced by air quality and temperature. However, precipitation has a negligible impact because ultrasonic sensors are used for very short-range detection applications. On the other hand, Mie scattering has a significant impact on the camera because its operating wavelengths (400–750 nm) are much smaller than the size of fog particles.

Humidity should affect ultrasonic sensors because humidity affects pressure directly. The attenuation of ultrasonic waves is affected by humidity levels in different ways. This effect is not always the same for all frequency to humidity levels. Maximum attenuation is observed at saturation at 200 kHz, but at 60 kHz, maximum attenuation is observed at 60% humidity. The latter frequency is relatively close to the frequencies used by modern AV sensors. High humidity should contribute to the attenuation of LiDAR performance due to the high absorption coefficient of water. The performance of LiDAR is unaffected by different levels of humidity. Because LiDAR is unaffected by humidity levels due to the water vapor content, RADAR will be unaffected as a more robust system.

Since they use technologies that require electricity and electromagnetism, the AVs must operate with electromagnetic stability on their own in ideal conditions. Lightning is a weather phenomenon in which a large electrical discharge occurs and balances out by producing a brief flash of up to 30,000 K in less than 10 microseconds. Because clouds aren’t specifically monitored to see when and where lightning might strike, all AV sensors are at risk, especially those on the vehicle’s exterior.

The car’s surface will hold the electrical charge when struck, depending on the car’s material and structural composition. Passengers may still be harmed if they come into contact with the vehicle’s shell or components connected to the shell, such as the steering wheel, gear shift, doors, or windows, contrary to popular belief; passengers may even be harmed by interacting with technology that has the electrical capability.

AV sensors can be affected even when not directly struck by lightning; this includes car technologies because the sensors are usually mounted to the vehicle. The new electromagnetic field created by the electrical discharge from the clouds can impact electromagnetic stability.

Thunder is the sound that follows lightning; they both happen when the other is present, even if the thunder is inaudible. The excited particles produce sound in an explosion that can be heard up to 30 kilometers away as the air is heated along the electrical discharge path. Sound can travel a long distance, and audibility is affected by various factors. Noise distorters include humidity, wind velocity, temperature inversions, terrain features, and clouds; this is especially important for ultrasonic sensors. Thunder can operate at both sonic and infrasonic frequencies. Although 100 Hz is the dominant frequency, infrasonic frequencies below 20 Hz are inaudible to humans. Due to wavelength disturbances caused by lightning, RADAR, LiDAR, ultrasonic, and possibly GNSS will be affected.

Dust storms are sand or dust walls that form due to strong wind currents, which are usually the result of a large thunderstorm and/or, on rare occasions, the movement of pressure fronts. The current pushes these dust particles, ranging in size from 2.5 to 10 microns, causing visibility issues and possibly facilitating cloud growth.

Since there are concerns about visibility, camera performance is severely hampered, regardless of whether there are poor visibility conditions in the air or whether the camera lens has become dirty. Dust storms were responsible for 549 fatalities over a year. According to Sky Harbor International Airport, Dust storms reduce visibility to less than half a mile (0.8 km). Smoke, which has some physical characteristics in common with dust storms, can wreak a system’s performance.

Smoke has a negative impact on LiDAR, but not as much as it does on cameras. Around 2.5–10 microns in size, dust storm particles will cause Mie scattering to the 905 and 1550 nm wavelengths, similar to how fog or rain affects LiDAR. However, because water has a high absorption coefficient, this scattering will be less powerful. Ultrasonic sensors’ efficiency shines in harsh working environments where process reliability is not jeopardized by dust, smoke, mist, or other impurities because they are extremely dirt-tolerant. This, however, only applies to the particles found in dust storms.