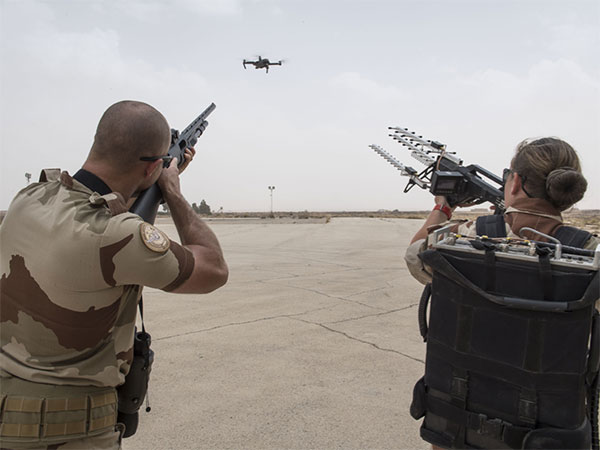 Counter-drone technology (counter-UAS, C-UAS, counter-UAV technology) refers to unmanned aircraft detection and/or disablement systems. The rise of C-UAS technology is largely due to the new threats posed by the growing use of drones in civilian and military environments, particularly small, low-cost systems.

According to The Drone Databook report, at least 95 countries now have drones, which could provide even the poorest state actors with aerial command of the battlespace previously only available to those with sophisticated aircraft programs. Non-state groups are increasingly turning to drones as a weapon of choice, using the technology for surveillance, battlespace management, propaganda, and aerial strike attacks, with varying degrees of success. Counter-drone systems will become a ubiquitous weapon in all future conflicts due to the proliferation of this technology, which is expected to continue apace in the coming years.

On the other hand, today’s counter-drone systems face several technical challenges, primarily because identifying and mitigating threats with currently deployed technologies has proven difficult. Counter-drone technology poses a wide range of challenges, including safety, practicality, policy, legality, and a simple question of effectiveness.

There are flaws in every detection system. Radar systems, for example, may struggle to detect small drones and UAS flying close to the ground. Camera systems may misidentify a drone as a bird or an airplane, and they may struggle in bad weather with low visibility or when the drone is backlit by a strong light source like the sun.

Certain RF sensors, including some marketed as “passive,” may emit RF signals that could interfere with other communications, making their deployment in some environments potentially dangerous.

To detect an intruding drone, radar, or certain RF systems, an EO/IR sensor requires a direct sight line. This could be especially problematic in urban areas, where a drone may only appear for a few seconds before disappearing from the line of sight of a sensor.

Some detection systems may only be able to provide a rough estimate of the location of an incoming drone. With automated tracking algorithms applied to radar or camera data, certain flight patterns—most notably hovering and moving vertically—can make drones harder to detect.

Acoustic sensors use a library of sounds emitted by known drones, and RF detection systems use a similar library to only detect specific frequency bands. Given the rapid rate at which drones are introduced to the market and grow in popularity, even frequently updated libraries will never be able to cover all of the drones in use at any given time.

To be useful, C-UAS detection systems must produce a low number of false negatives and positives. This is a difficult task. All drones operating within the use area must be detected by C-UAS detection elements that are sensitive enough. Too sensitive systems, on the other hand, may generate an excessive number of false positives, rendering the system useless. In cluttered environments, distinguishing true positives from false positives requires “a high level of manpower,” according to FAA counter-drone system testing results.

3. Distinguishing Legitimate and Illegitimate Drone Use

It will become increasingly important for C-UAS operators to distinguish between legitimate and rogue drones in future operating environments where legitimate drone use is common. For example, at a large sporting event, the airspace may be clogged with legitimate aerial cinematography drones and rogue drones posing a security risk. According to one official involved in the operation, the FBI counter-UAS team was “seconds away” from mitigating a drone that turned out to be operating as part of a sanctioned cinematography service during its deployment to the 2019 Super Bowl.

C-UAS operators will need to develop means to quickly and reliably determine the threat level of an incoming UAV based on the limited information provided by existing detection technologies, especially given the potential hazards of mitigating a drone in civilian environments (Remote ID technology may go a long way to addressing this issue once implemented, but it will not be a total fix). This could also be a problem in the military, as a C-UAS system that can’t distinguish between friendly and enemy unmanned aircraft could accidentally shoot down friendly drones.

Counter-drone operators may only have a few seconds to determine whether or not an incoming drone is malicious. Consider a security team protecting a large public gathering with a counter-drone system with a 750-meter effective identification range and an interdiction element that, if activated, could pose a level of risk to the crowd (see the following section). Assume a drone is flying at 15 meters per second toward the crowd (a fairly standard speed for many commercial systems available on the market today). The team will have less than 50 seconds to decide on an appropriate response in this case. Commercially available drones will become much faster in the coming years as propulsion technologies advance, further reducing the viable response window for C-UAS.

In certain circumstances, many, if not all, counter-drone interdiction techniques can be dangerous. Drones whose flight is disrupted by kinetic means may crash to the ground with a lot of force. Even net-based systems with a parachute to bring the trapped drone down to the ground in a controlled manner can be dangerous if the parachute fails to deploy properly or if the interception occurs at a low altitude. To hit a moving drone, interdiction elements must be extremely precise, and if they miss, they may endanger bystanders. Long-range effectors like lasers and high-powered microwaves could pose a serious threat to aircraft flying above a drone. Meanwhile, jamming systems can disrupt legitimate communications links in their vicinity; for example, if used at an airport, they could disrupt air traffic management operations. In areas where other entities rely on reliable GPS navigation, GPS jamming or spoofing systems are especially dangerous (for example, manned aircraft at an airport).
Cost

The cost of anti-drone technology is high. Even though most manufacturers do not publish their price lists, the lack of pricing information suggests that the technology is out of reach for many small businesses looking to protect their airspace. According to a 2019 Sandia National Laboratories study, 77 of the 123 C-UAS products with pricing information were more than $100,000. Two weeks after the Gatwick drone incident, the airport announced that it had already spent more than $6 million on counter-drone systems to prevent future incidents. According to Deutsche Flugsicherung, installing drone detection systems at Germany’s 16 busiest airports would cost more than half a billion euros. Additional costs for personnel training, maintenance, and staff time to operate the counter-drone system are significant.

There are no international standards for the proper design and implementation of C-UAS systems. This means there could be significant differences in performance and reliability between systems that appear very similar on the spec sheet. Because the demand for this technology has only recently emerged, many of the products offered by the companies we identified have not yet reached maturity. Some companies appear to be attempting to profit from the growing interest in this technology without properly maturing or field-testing their products. According to US security officials who spoke on the condition of anonymity, many systems actively marketed to US government customers do not perform as advertised. The lack of standards also raises concerns about the systems’ safety. A malfunctioning C-UAS system, particularly in civilian environments, could pose a public safety threat—consider a jamming system that interferes with emergency radio communications or a kinetic system that misses its intended target.

Counter-drone detection systems are a type of surveillance technology, so if they’re misused, or the data they collect isn’t handled properly, they could put people’s privacy at risk. For drones operating across a large area, electronic identification systems could obtain personally identifiable information, such as the aircraft’s registration number.

Similarly, wide-area camera systems may inadvertently capture people or vehicles on the ground who are unrelated to the counter-drone operations. This is in addition to any private digital information obtained from a drone during detection and tracking, and forensic analysis. So far, there have been few attempts to assess how to mitigate the privacy risks that may arise from using these systems. Under the Preventing Emerging Threats Act of 2018, US agencies with C-UAS authority must ensure that their operations comply with the First and Fourth Amendments, handle collected data responsibly, and destroy all intercepted drone communication data within 180 days. However, many civil or private C-UAS operators around the world are unlikely to have similar safeguards in place.