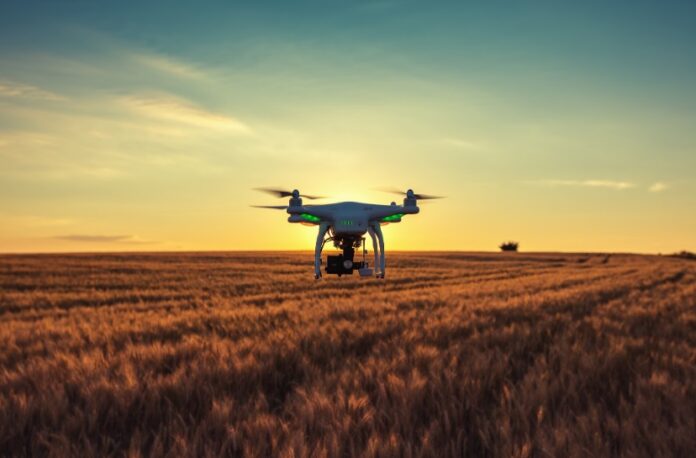 Aircraft have been in use for agriculture for decades, since the 1920s. But they were expensive to fly or hire, and the local hindrances were numerous. Later, satellites came into the picture to provide accurate and up-to-date information on the crop distribution, extent, and health from the sky.

Over the last few years, drones or unmanned aerial vehicles (UAVs) have become the most influential technology in agriculture, partially replacing manned aircraft and satellites for collecting very high-resolution imagery below the cloud level, with much more detail.

Unlike traditional remote-sensing methods and satellite imagery, usually available only in advanced countries, drones are inexpensive and easy to use for a vast range of service opportunities, including autonomous mapping and data-collection missions.

According to PwC, UAS can transform agriculture into a high-tech industry for the first time, with decisions being based on real gathering and processing of data and a likely increase in productivity and yields. Drones, providing real-time, remote sensed data, can be used to speed up the painstaking process of conducting crop inventories and yield estimates.

Despite the benefits and great opportunities offered by UAVs for inducing dramatic changes to agriculture, there are barriers to the rapid drone deployment in some countries due to the concerns from government authorities on the improper use of this disruptive technology: privacy infringements, invasion of reserved airspace and potential aircraft collisions, personal injury and property damage.

Although drones are used in agriculture for the last two decades, rules and regulations about agricultural drone uses are still in their early years in the world. The result? The presence of too restrictive or even disabling rules and regulations governing the import and use of UAVs hinder the development of a very promising drone industry. Some countries have even resorted to a complete ban on the import and use of UAVs.

Being a new technology and developing faster than the regulations intended to regulate its use, it is quite challenging to assess how these have influenced UAS operations in agriculture. Small UAVs are unmistakably different from aircraft in so many ways, yet they are considered full-fledged aircraft in most countries. Besides, the number of UAVs now flying is mind-boggling, which is perhaps the prime challenge impacting their governance. Other challenges are as follows:

Drone technology has got considerable potential in carrying out several agricultural operations very efficiently. Favorable regulations on the use of small drones for agriculture and access to platforms that can aggregate data from various sources to provide valuable insights, would be greatly beneficial to farming communities.

In shaping drone governance, there is the need to find a balance between managing the ground and air risks of UAS operations, the need for safety and privacy, and the benefits to agriculture and broader natural resource management. Hence, it is of paramount importance that governments closely interact with stakeholders in the process’s agricultural sector.

Besides, there is also a need to continue advocating for the standardizing of regulations toward a risk-based approach, especially as this will clearly benefit agriculture. A special focus is needed on addressing data capture and privacy issues as these are the backbone of agricultural improvements. The issues related to regulation, ethics, and implementation need to be discussed carefully, keeping in mind the existing legal and moral principles and adapting them to the fast technological changes to build a helpful UAVs governance system.

As the industry is fast developing, the regulators should be fully aware that the impact of their decisions reaches far beyond security and privacy and could determine whether agriculture becomes a data-driven and profitable enterprise or not.