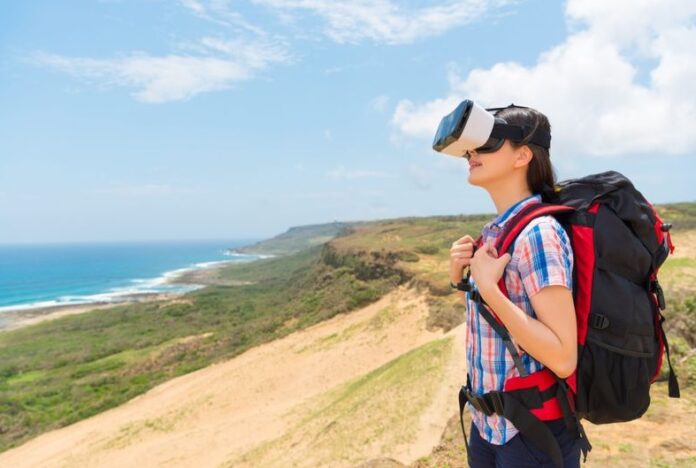 To enhance visitor interactions at cultural heritage sites and attractions, including museums, monuments, art galleries, theatres, archaeological, historical, and religious sites, an increasing number of tourist destinations today have begun to explore the use of two promising technologies — Augmented Reality and Virtual Reality, that permit users to enter in a virtual world and interact with computer-generated graphics and videos.

Notably, VR applications offer features like feedback in the form of sound or touch to allow users to interact with objects and spaces, making the entire experience seem real. VR is naturally suitable for travel and tourism because technology is all about releasing the user from their physical boundaries.

Using virtual reality, a tourist can tour places near and far, real or imagined, and even travel through time. Unlike travelogues, still, pictures, or even videos, a VR experience is the perfect way to provide a “sneak peek” of the destination before packing a bag.

This article will explore the benefits and impact of combining two promising technologies — Augmented Reality and Virtual Reality, on enriching the tourist experience before and during the visits.

Virtual tourism can contribute substantially to the development of tourism in a variety of ways:

Let’s look at some more use cases of AR and VR applications in marketing, entertainment, education, accessibility, and heritage preservation.

One of the important implementations of VR in tourism is in marketing. VR can be used to market a destination, which could be intangible or inaccessible for visitors and providers to arrange a trip. From a marketing perspective, VR has the potential to revolutionize the promotion and selling of tourism because of its ability to provide the most accurate experience of a destination without necessary physical co-location.

Anyone interested in exploring a destination would be able to enter a virtual destination, have more realistic expectations, and make better informed decisions, leading to a more satisfactory vacation. In fact, many tourism products already use similar technologies to attract tourists, but these “virtual tours” often are simply panoramic photographs that do not permit any free navigation. Virtual experiences provide more effective advertising than brochures. When used as a marketing tool, VR can help convey experiences, increase awareness, purchase target, and theoretically enhance destination image.

In addition to serving as a marketing tool, VR systems can also function directly as marketable, entertaining tourist attractions. The technology has been entertaining the users through simulated video games, virtual speedways, etc., playing a large role in the evolution of the entertainment industry. Although many VR entertainment applications are designed for home use, it has already been established as a key attraction in tourism destinations, like Las Vegas, Orlando, etc. Theme parks are especially logical places to offer VR entertainment, and one already can ﬁnd VR entertainment in various theme parks worldwide.

VR offers an attractive form of “edutainment,” i.e., education through entertainment. VR can provide a good platform for the transfer of knowledge and be an effective means of communicating a large amount of information. It leverages the user’s natural spatial perception abilities and allows great potential for interaction, such as through games or challenges. It can function as a unique and valuable investigative tool permitting researchers to learn about the sites and objects that tourists visit.

VR also provides numerous advantages for researchers, such as the ability to test theories or evaluate virtual restorations without disturbing actual objects. The ability to observe objects from otherwise impossible viewpoints and to re-create environments and lighting to observe how a site or object would have appeared in the past are priceless for the researchers.

Some tourist sites and historical objects can be too remote, expensive, inhospitable, dangerous, or fragile. Some may no longer exist. Providing the best possible alternative in such scenarios brings a unique experience in tourism. VR increases the accessibility of destinations, which are unavailable to the public due to financial or physical limitations.

It can remove some of the obstacles to travel, including safety, cost, and physical capabilities. Besides, the opportunity to investigate virtual re-creations of different sites demonstrates the general increase in accessibility to both researchers and the general tourist public.

Rendering such sites and objects as virtual 3D models can function as a valuable tool for heritage preservation. Such virtual models can contain extremely precise and accurate data sets that theoretically can be stored indeﬁnitely. Numerous research suggests that VR could preserve heritage by providing an alternative form of access to threatened sites and objects suffering degradation from impacts like erosion.

Metaverse: Why, How, and What