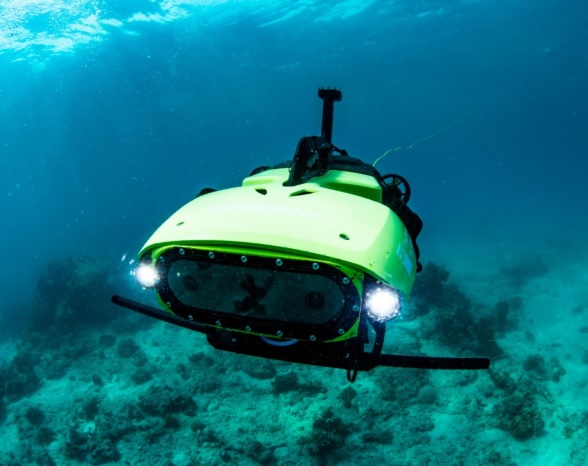 The world’s oceans cover 2/3 of the earth’s surface and have been critical to human welfare throughout history. They represent critical sources of food, transport, and other resources such as oil and gas.

Unfortunately, due to overfishing, acidification, and pollution, the ocean ecosystem is changing rapidly, and this may lead to largely unknown consequences for the biodiversity and survival of marine life forms. Scientists believe that robots can help undo some of the damage already caused to our oceans.

This post presents the top eight underwater robots that protect our oceans in many ways.

Scarlet Knight (also known as RU27) is the first underwater robotic vehicle or glider which carried out a trans-Atlantic journey over several months in 2009. This U.S. Integrated Ocean Observing System, developed by Rutgers University, is an 8-foot autonomous vehicle that traced the 517-year-old path of Columbus’s ship, the Pinta, by traveling from New Jersey to Spain. Its underwater expedition had provided data to help scientists better understand how climate change is affecting the ocean.

The glider had no engine to propel it forward. It rode the ocean currents, making a series of 10,000 dives and ascents to collect data on ocean circulation, the heat content and heat transportation on the upper layer of the ocean as it crossed the Atlantic. Its descents involved pumping a small volume of water into its nose, causing it to sink, and unequal buoyancy along the fuselage would send the glider 150 to 180 meters down the water column.

The ascending involved the reverse ie, pumping approximately a cup of water into the tail, causing a glide upwards. This pattern of dive-and-ascend cycles continued for 4,600 miles. The glider stayed almost continually underwater, surfacing only three times a day to check its location, transmit data, and download new piloting instructions from home via an Iridium telephone on its tail.

The Soft Robotic Fish (also known as SoFi) is a hypnotic machine, developed by MIT researchers as a potentially powerful tool to study ocean life. Scientists designed SoFi to solve several problems that bedevil oceanic robotics, such as 1) Communication: Instead of radiofrequency communication that works for a few centimeters underwater, SoFi’s inventors use sound. Acoustic signals in water can travel for much longer and with much less energy consumption. 2) Actuators: Classical robot electric motors are clunky, and the movement they produce can be stuttery.

SoFi’s tail contains two hollow chambers that a pump injects with water. When you cycle the water back and forth, it causes the undulation and the wiggling of the soft tail. Contrast that with robots that use jet propulsion, this robot can swim with the fishes without spooking them. 3) Energy: Swimming is energetically expensive, especially when a fish needs to swim up or down constantly. So fish have evolved a gas-filled organ called a swim bladder, which allows them to achieve neutral buoyancy. SoFi uses its swim bladder, a cylinder that compresses and decompresses air with a piston. It helps give the robot structural integrity and allows it to reach depths of 60 feet by better controlling its internal pressure.

WasteShark is an autonomous robot shark that can eat up to 15.6 tons of waste debris in the ocean each year, to tackle the scourge in ocean pollution and protect marine wildlife. WasteShark can capture up to 130lbs (60kg) of waste at a time and can run for eight hours. If it runs five days a week, it can clear 15 tons of waste from waterways every year. The robot can roam distances of up to three miles (five kilometers). It can function for eight hours before it needs to be charged. Its inventors RanMarine used the whale shark, a slow-moving, filter-feeding carpet shark, as inspiration for the drone model. The robot can go as deep as one foot (300 cm) below the surface. WasteShark poses no threat to wildlife and doesn’t produce any noise.

Thomas is a marine robot created in 2013 by ASV Global to collect important marine data to help us understand more about our seas. Equipped with a range of sensors and cameras, he is designed to measure the salinity, sounds, and temperature of the ocean. He can capture images and footage of dolphins and other marine wildlife.

COTSbot is an autonomous underwater drone developed by Queensland University of Technology (QUT) to kill destructive starfish in the Great Barrier Reef off the north-east coast of Australia. Armed with stereoscopic cameras to provide depth perception, movement control sensors to detect and compensate the ocean currents, and a GPS for navigating, it identifies its target using an image-analyzing neural net to analyze what an onboard camera sees. It then lethal-injects the starfish with bile salts or similar using a needle on the end of a long underslung foldable arm.

RangerBot is the smaller version of COTSBot developed by QUT. Ths autonomous underwater robot designed to identify and kill starfish, which preys on coral. The robot has a powerful camera and AI system to navigate the coral reef and recognize its starfish targets. Developed in association with the Great Barrier Reef Foundation, the RangerBot can be easily customized to fulfill the needs of other reef systems across the world.

Researchers at the Australian Institute of Marine Science developed a remotely operated underwater vehicle Blue ROV2 to monitor the Great Barrier Reef. It can dive up to 100 meters and can lock-on and follow a transect line across a reef. The robot has a hyperspectral camera that captures more than 270 bands of colors, providing the ability to survey the reef in great detail, including mapping of the ocean floor, depth, and identifying bleached corals.