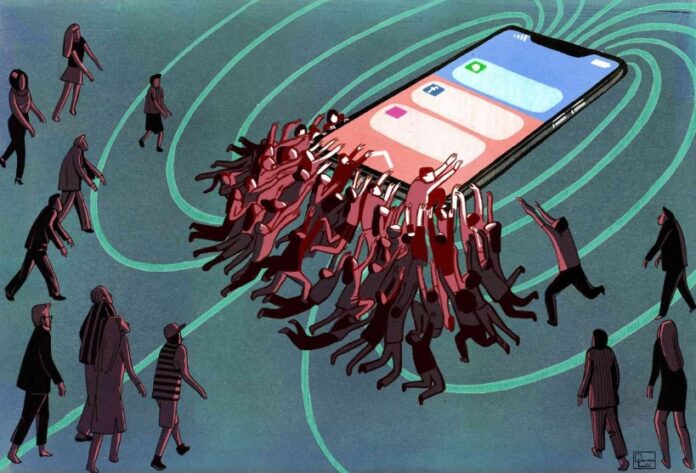 In today’s fast-moving world, it is almost impossible to imagine our day-to-day life without mobile phones. Although mobile phones have been in extensive use for a relatively short period, they have become a powerful and convenient means of communication and numerous useful applications or functions.

Although mobile phones make our life smooth, they have many evil effects. Unfortunately, people do not notice how much they depend on mobile phones and what affects their excessive use might bring. The studies show that there is a link between prolonged mobile phone use and serious health damage. Mobile phones can affect one’s thought and decision-making process, choices, behavior, and attitudes more negatively and faster.

Smartphone addiction is a well-recognized condition known to cause personality changes, trauma, and high-level anxiety pains. Addiction to remain online, a compulsion to be active on social sites, leads to low productivity and impacts emotional health.

Constantly looking for something interesting on the web, social sites, and games inhibits one’s emotional ability to focus on one topic for a long time. It has already been proved that long hours of gaming make anyone impatient, addicted, and unproductive. Long-time effects may be worse, permanent, and affecting the more subconscious layer of behavior.

Other serious health risks include brain tumors due to radiation, damage to fertility, genes, the blood-brain barrier, melatonin production, and other biological effects. Almost every study of prolonged mobile phone use – roughly half an hour a day for 10 years – has found an increased risk of brain tumors.

Notably, during the COVID-19 lockdown, students and children are making excessive use of their mobile phones. This post will explore some of the negative effects of mobile phones on our health.

The abrupt change in graphics, brightness, and details while gaming which is one of the main causes of chronic dry eye syndrome. The eyes bear a tremendous amount of reflexes, stress, and dryness. Before the eyes can relax and recover, there is a new job ready again within that screen that it’s sick of.

“Nomophobia” (no-mobile-phone-phobia) is a condition of being addicted to your phone. A recent survey found that 84 percent of the world’s population said they could not go one go about in their day without their smartphones, and current research shows that nearly two-thirds of young adults and teens check their phones every 15 minutes or less. The anxiety and stress over missing out on a text or Facebook update can take such a toll on people’s health.

Today, it is very common to see teenagers and even adults exhausted from the long hours spent on a smartphone, be it games or surfing the Internet. It impacts digestion, breathing rate, and heartbeat rate. Smartphones have become a new enemy to our sleep in terms of quality and time. Apart from that, the hours that otherwise might have been spent exercising, going out, getting fresh air in parks, interacting with your loved ones or even pets are all taken up by your smartphones.

Many diseases are resulting from wrong posture while working for long hours. Gazing into your phone for a long time with your neck bent and arms in a fixed position poses a serious health risk. Pain, muscle spasms, and restlessness are just short-term effects. In the longer run, permanent or chronic diseases can occur. Cervical spondylitis, golfer elbow, chronic dry eye syndrome, stiffness in thumbs, neck, and back are a few diseases occurring from habituated wrong postures of using smartphones.

5. Cancer and other tumors

6. Damage to fertility and reproduction

Laboratory studies have found damage to sperm, impaired female fertility, and damage to the unborn fetus from exposure to mobile phone radiation.

Different research groups suggested that even after short periods of exposure to phone radiation, DNA strands can be broken, affecting gene expression. Phone radiation can disturb the DNA repair mechanism, and this can continue for several hours after the phone use.

8. Damage to other biological processes

Studies suggest that phone radiation can damage the blood-brain barrier, causing albumin leakage into the brain. Human melatonin levels were significantly reduced after about half an hour of daily mobile phone use in studies. The study discovered effects on heat shock proteins (like a stress response), apoptosis (cell death), oxidative stress, and cell membrane damage. These are thought to play a role in the development of cancer.

People with higher exposure to electromagnetic radiation have a significantly more difficult time falling asleep. Sleeping next to a phone, in a house with Wi-Fi, or in an apartment building with many Wi-Fi signals can cause chronic sleep problems because the constant barrage of Wi-Fi pollution disrupts falling asleep and sleep patterns. For many people, sleep deprivation is only the beginning of a bigger problem. Inadequate sleep has also been linked to the development of depression and hypertension.