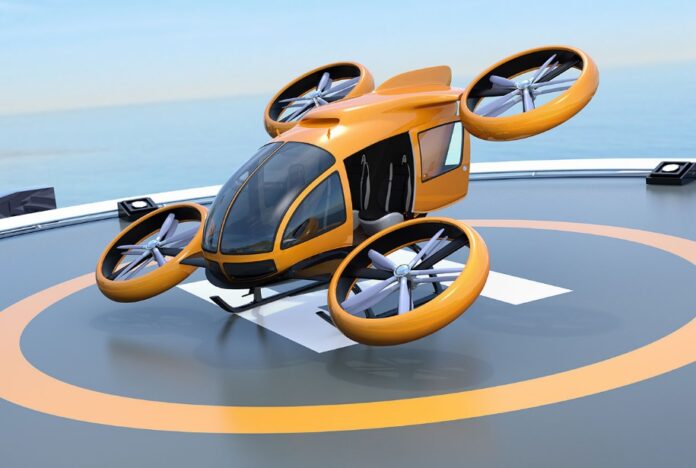 The negative effects are higher noise levels and harmful emissions, and an increase in the so-called door-to-door travel time. In major cities like Los Angeles and New York, the average commuter spends more than 90 minutes stuck in traffic, contributing to increased stress and anxiety. It not only harms commuters’ health and the environment, but it also contributes to economic loss. Manhattan, for example, loses $20 billion per year due to traffic congestion, with excess fuel and vehicle operating costs accounting for nearly a third of the total loss.

Aircraft makers such as Airbus, Lilium, and Kitty Hawk, and companies like Bell, Embraer, Hyundai, Rolls-Royce, and Toyota have been actively involved in air taxi manufacturing over the past few years. Besides, Uber estimates the launch of its air taxis in 2023. Other companies such as Zephyr Airworks and Airbus are also currently taking measures to conduct tests with their electric aviation taxis, namely Cora and Airbus-Vahana, respectively, in countries across the world, such as the USA and Japan, Singapore, New Zealand, France, and India.

The ability to save time is one of the major advantages of using an air taxi service. A city-to-airport air taxi transfer in Paris, for example, could be 2 to 4 times faster than a car journey during rush hour on a Thursday evening. In addition, using the example of a trip in Berlin on a Thursday evening during rush hour, medical transportation of equipment or organs could be completed 73 percent faster by drone than by ambulance. Passengers would find that using urban air services saves them a significant amount of time compared to taxis and subway lines. Air taxis would relieve traffic congestion and reduce daily commute times for commuters in congested cities.

Ultrahigh-net-worth individuals and top executives in megacities such as São Paulo and New York already commute by helicopter. Eventually, the switch to electric propulsion and autonomous flight operations will slash eVTOL vehicle purchase and operating costs by order of magnitude, allowing a much broader target group to enjoy the urban air experience. Unmanned flights based on self-driving technology will cut costs even more. Combining the above cost reductions with passenger pooling (e.g., from the airport to the city center) could make the urban flight experience available at prices that are still higher than taxis but much lower than today’s helicopter services.

Anyone who has ever flown over a city in a helicopter knows the adrenaline rush and joy that such a flight can provide. Even though safety is more important and must be guaranteed at all times, the human desire to fly is an appeal that should not be overlooked. Passengers must also believe that this mode of transportation is safe and dependable, and a strong regulatory framework will go a long way toward assuaging passenger concerns. Flight attendants provided by flight operator companies could also help many people overcome their understandable psychological reservations about autonomous aircraft, particularly in the early stages.

Another factor that will add to electric propulsion’s real and perceived appeal is its role in reducing carbon emissions in cities. However, it is not just the technical aspects that will ensure that passengers have a safe and enjoyable flight. Environmental factors, such as harsh weather conditions that make the flight uncomfortable or dangerous, will require special attention.

The development of battery technology has accelerated, and significant research is being funded to improve the development and adoption of electric vehicles and autonomous vehicles. Air taxis are well-suited to technological advancements in autonomous and electric vehicles. Electric power rather than traditional fuel-powered flying cars is especially important because the air taxi infrastructure will be integrated into urban cities. Noise and emissions must be kept to a minimum for the network to be viable. If battery-electric propulsion systems are used, local emissions from air taxi services in the city environment could be almost zero.

There are a few risks associated with the implementation of air taxi services. Amongst the top concerns in the literature or stated by experts are: