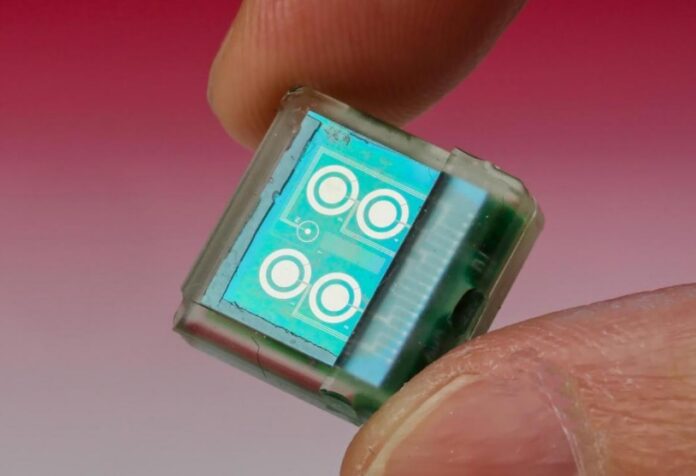 The history of biosensors began with the enzyme electrode, a miniature chemical transducer described by Leland C. Clark in 1962.

Since then, scientists from different areas such as VLSI, Physics, Chemistry, and Material Science, have developed more sophisticated, reliable, and mature biosensing devices for applications in the fields of medicine, agriculture, biotechnology, as well as the military and bioterrorism detection and prevention.

A biosensor is a self-contained integrated device, incorporating a biological recognition element (biochemical receptor) either intimately connected to or integrated within a transducer to produce a digital electronic signal which is proportional to the concentration of a specific chemical or set of chemicals.

Biosensor consists of two main parts: A bioreceptor and a transducer. Bioreceptor is a biological component (tissue, microorganisms, organelles, cell receptors, enzymes, antibodies, nucleic acids, etc.) that determines the target analyte. The difference fraction is a transducer, a physicochemical detector component that changes the detection event into a measurable signal.

The key benefits of biosensors include the following:

The function of a biosensor depends on the biochemical specificity of the biologically active material. The choice of the biological material will depend on several factors: specificity, storage, operational and environmental stability. The major application of biosensors so far is in blood glucose sensing because of its abundant market potential. Other major applications of biosensors are listed below:

In this post, we will look at some of the key types of biosensors used as diagnostic tools.

The acoustic wave transducer in this type of biosensor is coupled with an antibody (bio-factor). The analyte molecule (or antigen) gets added to the membrane, the mass of the membrane diversities, resulting in diversification in the mass, subsequently diversities the resonant frequency of the transducer. This frequency change is then measured.

For this type of biosensor, the output transducer signal measured is light. The biosensor is based on optical diffraction or electrochemiluminescence. Optical transducers are particularly attractive for application to direct (label-free) detection of bacteria. These sensors are accomplished to discover minute conversions in the refractive index or thickness, which happens when cells fasten to receptors immobilized on the transducer surface.

They correlate changes in concentration, mass, or number of molecules to direct changes in light characteristics. Several optical techniques have been reported for the detection of bacterial pathogens, including monomode dielectric waveguides, surface plasmon resonance (SPR), ellipsometry, the resonant mirror, and the interferometer, etc.

This type of biosensor exploits one of the fundamental properties of biological reactions: absorption or production of heat, which changes the temperature of the medium in which the reaction takes place. They are combined with temperature sensors by combining immobilized enzyme molecules. When the analyte comes into contact with the enzyme, the enzyme ‘s heat reaction is measured and calibrated against the concentration of the analyte. Common uses of this kind of biosensor include pesticide detection and pathogenic bacteria.

Electrochemical biosensors are mainly used to detect hybridized DNA, DNA-binding drugs, glucose concentration, etc. Electrochemical biosensors can be classified based on the calculating electrical guidelines as (i) conductimetric, (ii) amperometric, and (iii) potentiometric. Contrary to optical approaches, electrochemistry gives the analyst to act with turbid samples, and the capital cost of equipment is much lower. On the other hand, electrochemical methods present slightly more limited selectivity and sensitivity than their optical counterparts.

Recent advances in bioanalytical sensors have led to the utilization of certain enzymes’ ability to emit photons as a byproduct of their reactions. This phenomenon is known as bioluminescence. The potential applications of bioluminescence for bacterial detection were begun by the development of luciferase reporter phages. The bacterial luminescence lux gene has been broadly exercised as a reporter in an inducible or constitutive mechanism.

A nucleic acid biosensor is an analytical instrument that integrates an oligonucleotide with a signal transducer. The nucleic acid probe is immobilized on the transducer and behaves as the bio-recognition molecule to detect DNA/RNA fragments.

Nanosensors can be described as sensors based on nanotechnology. The development of nano biosensors is one of the most current advancements in the area of Nanotechnology. The silver and certain other noble metal nanoparticles have many important applications in the field of bio labeling, drug delivery system, filters, and also antimicrobial drugs, sensors.