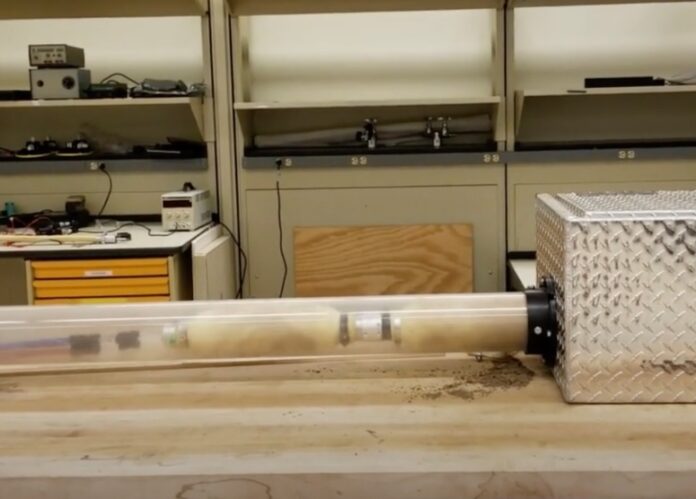 It caught our attention when GE Research announced its $2.5 million project to demonstrate the feasibility of a bio-inspired, earthworm-like robot, capable of rapidly and efficiently digging tactical tunnels for critical military operations in the front lines.

A multidisciplinary team of researchers from GE (General Electric Company) will spend the next 15 months on this DARPA Underminer program, enabling the rapid construction of underground tunnels for battlefield operations, including rescue missions and munitions logistics, exceeding the current commercial drilling capabilities.

The project leader and mechanical engineer Deepak Trivedi was happy to take a few questions from RoboticsBiz. The inspiration for GE’s earthworm-like design has its roots in Trivedi’s doctoral work, one of the earliest in soft robots such as octopus arms and elephant trunks. This idea was creating a robot that had the dexterity to make sharp turns, squeeze through confined or small spaces, and adaptability to pick up and move objects of vastly different sizes and shapes.

Deepak joined GE Research in 2010 after completing his PhD in Mechanical Engineering and Computational Science from Penn State. Deepak has authored over 15 publications that have been cited in total over a 1000 times.

Can you tell us about the earthworm-like design?

It turns out earthworms are probably the most prolific tunnel makers on the planet. Earthworms rely on muscular structure filled with fluid, called the “hydrostatic skeleton.” When they move, some sections of their structure radially expand to enlarge the tunnel while anchoring the worm, while others become longer to create movement and penetrate further into the soil.

Tree roots can also penetrate through highly compacted soils and soft rock by generating high pressures through tissue growth. We have designed a prototype that is several feet long, with artificial hydraulic muscles that mimic the agility of earthworms moving through the soil and with the force of tree roots penetrating through soft rock. The robot is capable of adaptively changing its gait depending on soil conditions. The robot can create tunnels without the need for bringing any material to the surface, giving it advantages of efficiency and stealth.

How does its stealth feature works?

Our robot creates tunnels by displacing the soil around it rather than cutting, evacuating, and transporting the soil to the surface, as done in many traditional tunneling techniques. This operation does not require significant above-ground support equipment to transport the spoils of tunneling. The robot achieves this by emulating the expansion-penetration-contraction cycles of the earthworm. The radial expansion of the worm with a large force displaces the soil radially, enlarges the tunnel, and compacts the soil, leading to good tunnel integrity. Since there are no spoils on the surface to be easily spotted, the operation can be very stealthy.

The robot can navigate its way around obstacles autonomously to reach the desired target location without GPS. Can you give us an idea of how this autonomous and sensing capability works underground, enabling the robot to move and tunnel in the right places?

We are leveraging GE’s vast cross-industry experience in sensing technologies coming from the Oil and Gas (drilling), Aviation (inertial navigation) and Healthcare (ultrasound) industries to develop solutions for Underminer.

Another impressive feature is speed. It is said that the robot can move at a speed of 10 cm/sec and dig a tunnel that is 500 meters in length and at least 10 cm in diameter. Tell us about the advanced tunneling technologies used in the robot for drilling under challenging underground circumstances, especially when the robot cannot navigate its way around an obstacle.

Our target is to dig 10 cm wide tunnels up to 500 m long at a speed of 10 cm/s. One unique advantage of our technology is that the locomotion of the robot itself expands the tunnel, so the function of tunneling and locomotion are merged into the same multifunctional structure. We are using powerful hydraulic artificial muscles that operate at very high pressures and provide the force to both expand the tunnel and propel the robot forward. The robot needs a small piloting tool in the front to start the tunnel, and the powerful muscles take care of the rest.

The prototype has performed some initial lab-scale demonstrations of the robot tunneling through the dirt. Does it have any commercial or industrial use cases?

This project will not only help advance tunneling technologies but also advanced inspection and repair capabilities using robots. The soft robot design we’re creating will have many more degrees of freedom in movement than conventional robots with joints. One of the reasons, octopuses, for example, can squeeze through such small spaces is that they have no bones. The same thing applies to soft robots, which can be very advantageous when you want to reach small places like the inside of a jet engine or power turbine to inspect and make intricate repairs.