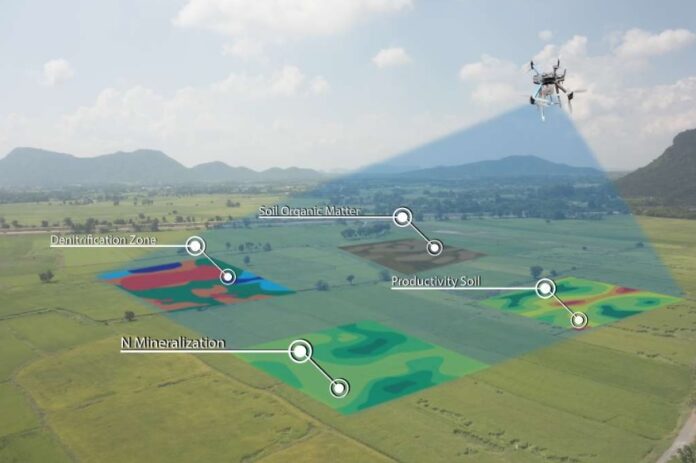 A few years ago, drone technology seemed to be an unreachable facility for poor farming communities, but gradually, things have changed a lot.

The deployment of drones in precision agriculture is a cost-effective and time-saving technology that can help for improving farm productivity, crop yields, and profitability in farming systems. Drones facilitate agricultural management, weed monitoring, and pest damage; thereby, they help meet these challenges quickly.

Drones can be efficiently used for small crop fields at low altitudes with higher precision and low cost than traditional manned aircraft. Using drones for crop management can provide precise and real-time data about a specific location.

Moreover, drones can offer high-resolution images for the crop to help in crop management, such as disease detection, monitoring agriculture, detecting the variability in crop response to irrigation, weed management, and reduce the number of herbicides.

Four factors need to be monitored to determine a need for irrigation: 1) Availability of soil water; 2) Crop water need, which represents the amount of water needed by the various crops to grow optimally; 3) Rainfall amount; 4) Efficiency of the irrigation system. These factors can be quantified by utilizing drones to measure soil moisture, plant-based temperature, and evapotranspiration. For instance, the spatial distribution of surface soil moisture can be estimated using high-resolution multispectral imagery captured by a drone combined with ground sampling. The crop water stress index can also be calculated to determine water-stressed areas by utilizing thermal drone images.

According to estimates, in the U.S., the crop losses caused by plant diseases result in about $33 billion in yearly lost revenue. Drones can be used for thermal remote sensing to monitor crop diseases’ spatial and temporal patterns pre-symptomatically during various disease development phases. Hence, farmers may reduce crop losses. For instance, aerial thermal images can be used to detect early-stage development of soil-borne fungus.

Crop residues are essential in soil conservation by providing a protective layer on agricultural fields that shields soil from wind and water. An accurate assessment of crop residue is necessary for the proper implementation of conservation tillage practices. Aerial thermal images can clearly explain more than 95% of the crop residue cover amount variability compared to 77% using visible and near IR images.

Drones can be a practical technology to monitor crop maturity for determining the harvesting time, particularly when the entire area cannot be harvested in the time available. For instance, drone visual and infrared images from barley trial areas at Lundavra, Australia, were used to map two primary growth stages of barley and demonstrated classification accuracy of 83.5%.

There are several challenges in the deployment of drones in PA: