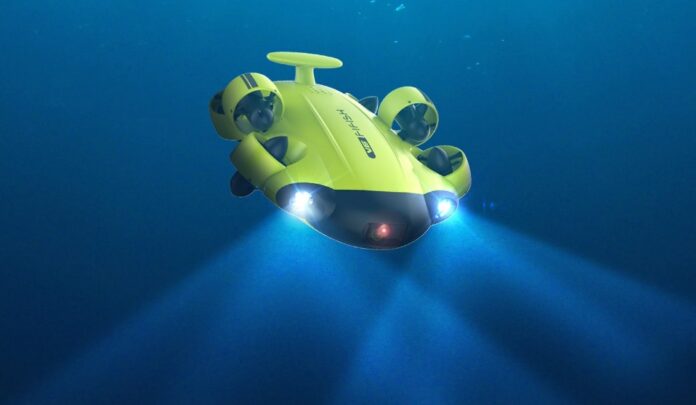 Ever since the ﬁrst remotely operated underwater vehicle, POODLE, was first launched in 1953, underwater robots such Autonomous Underwater Vehicles (AUVs) and Remotely Operated Vehicles (ROVs) began to evolve through the 1960s and 1970s, mostly for military purposes.

In the 1980s, ROVs became available for use in the commercial offshore industry and began to emerge for scientiﬁc applications. The ﬁrst tether-less, autonomous vehicles were built for experimental purposes in the 1970s.

Currently, underwater robots are increasingly used for military, commercial, and scientiﬁc applications, including deep-sea exploration for resources like oil, gas and metals, pipeline repair, shipwreck investigation, surveys, oceanographic sampling, underwater archaeology and under ice survey, and the understanding of natural forces such as hurricanes and tsunamis.

All ROVs are equipped with a video camera, propulsion system, and lights. Other equipment such as manipulator arm, water sampler, instruments that measure clarity, light penetration, temperature, and depth, is added depending on the specifications required. In military applications, AUVs are often referred to as unmanned undersea vehicles (UUVs).

Modern ROVs are categorized based on their size, depth capability, on-board horsepower, and whether they are all-electric or electro-hydraulic as follows:

The common types of sensors used in underwater vehicles are as follows:

Underwater robots currently play prominent roles in several scientiﬁc, commercial, and military tasks. They are increasingly used to relieve the burden on human operators and to improve performance.

Presently, AUVs are used almost exclusively for survey work, but sampling and other intervention tasks are becoming more feasible. The goal is not only for these robotic vehicles to replace human divers or human-occupied vehicles but also to enable an entirely new generation of subsea equipment serviced without intervention by drillships or other heavy-lifting vessels.

The offshore oil and gas industry heavily relies on ROVs for installation, inspection, and servicing of platforms, pipelines, and subsea production facilities. As the search for oil and gas goes deeper, this trend can only continue. Scientiﬁc applications for ROVs include survey, inspection, and sampling tasks previously performed by human-occupied submersibles or towed vehicles. Scientiﬁc ROVs are now equipped with sophisticated sampling devices for sampling animals, microbes, caustic hydrothermal vent ﬂuids, and various rock samples. Moreover, ROVs are also used to deploy and operate seaﬂoor experiments, which can involve difﬁcult tasks such as drilling and the delicate placement of instruments.

AUVs can improve productivity and data quality compared to towed and tethered systems. They have also operated in environments where no other means of gathering data is possible, such as under ice shelves. Likewise, the increasing availability of sophisticated chemical sensors, biological sensors, and mass spectrometers now allows AUVs to build spatial and temporal maps of environmental features that could previously only be studied by bringing samples back to the laboratory.

The military has always been a leader in the development of underwater robotic capabilities. They pioneered ROVs for tasks such as recovering test weapons and deep-sea salvage.

Many countries operate AUVs for military surveys, gather environmental data, and search for hazards such as mines. The most innovative application includes networks of AUVs that can act as extensions of conventional surface vessels and submarines, enabling surveillance over wide areas for extended periods at costs far less than what could be achieved with conventional surface vessels, submarines, and aircraft.