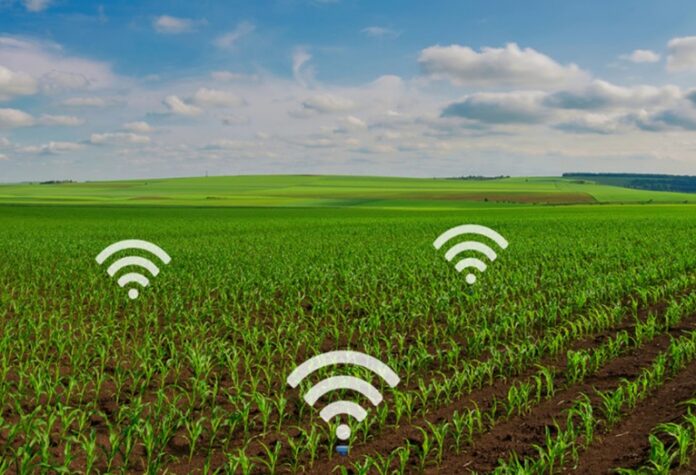 Rapid growth in population, climate change, reduction in rainfall, and demand for more food to feed billions of people worldwide are placing a lot of pressure on arable farming with negative impacts on conventional farming practices.

With the advent of the Internet of Things (IoT) and the digital transformation, these technologies can be leveraged to remotely monitor soil moisture, crop growth, and preventive measures to detect crop damages and threats.

Remote management of agricultural activities, through automation using wireless sensors and the Internet of Things, is the area of focus today in agriculture to provide new insights and improved decision making.

A sensor is a simple and small device that measures or detects real-world conditions such as motion, heat, or light and converts the condition into analog or digital representation. Compared with other analytical techniques such as chromatography or spectroscopy, the advantages of sensors are their robustness, reduced size, versatility, and low mass-production costs.

This post will look at different types of sensors used in precision agriculture to measure the most essential parameters and chemical properties of the soil that affect the yield.

There are two types of EC sensors: contact or non-contact:

Optoelectronics deals with the interaction of electronic processes with light and optical processes. Devices where such interaction takes place, are called optoelectronic devices. Optoelectronic sensors, in general, use the characteristics of different materials to have a defined spectral signature. The system is composed of a light source (emitter) that emits light in a wavelength range and a sensor (detector) for specific wavelength ranges. Soil organic matter (SOM) sensor is one widely used under this category.

Although inexpensive, the single-wavelength sensor needs to be recalibrated for the soil and moisture conditions that prevail at the time of use. The multiple wavelength sensors can utilize a single calibration to predict SOM over a range of soil moistures and soil types within a geographical area of several hundreds of kilometers. Besides, it can be used to sense soil moisture and cation exchange capacity (CEC).

Electrochemical sensors provide the most important information on nutrient availability and pH in the soil. When soil samples are sent to the soil testing laboratory, a set of standardized laboratory procedures is performed. These procedures involve sample preparation and measurements. Some measurements are performed using an ion-selective electrode. These electrodes detect the activity of specific ions (nitrate, potassium, or hydrogen in case of pH). The value obtained may not be as accurate as a laboratory test, but the high sampling density may increase the overall accuracy of soil nutrients or pH.

Ion Selective Electrode sensors measure the potential of a specific ion in a solution. They are also used to determine the nitrogen content in the soil. The potential is measured against a stable reference electrode of constant potential. The potential difference between the two electrodes depends on the activity of the specific ion in a solution. This activity is due to the concentration of the specification, allowing the end-user to make an analytical measurement.

Mechanical sensors measure the mechanical resistance of the soil. These sensors penetrate/cut through soil and record the force measured by the strain gauge or load cells.

Airflow sensors: These are used to measure the soil air permeability. The sensor measures the pressure to squeeze a given volume of air into the soil at a fixed depth.
Acoustic sensors: Soil texture is investigated by measuring the change in the noise level due to the tool’s interaction with the soil particles.

A range of sensors is used with the right combination of intelligent integration, logic, and customizable software in soil science. They include: