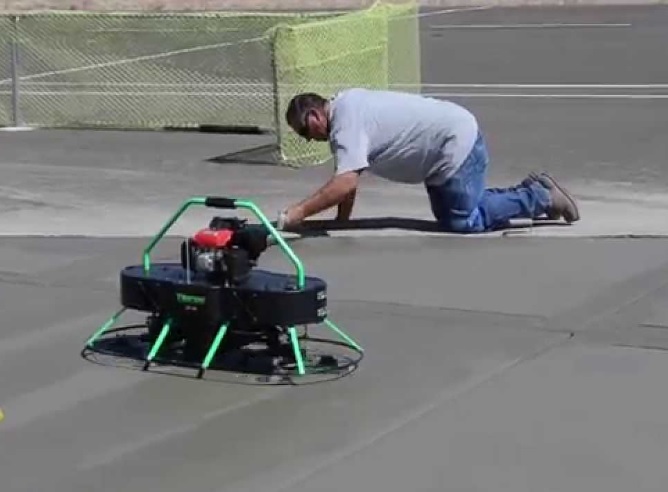 Concrete finishing is an essential step in construction that requires immense attention and effort to smooth and level out the surface. Traditionally, workers use an array of power trowels, screeds, vibrators, polishers, grinders, and brooms to perform delicate detail work, blend in surface color, or maneuver in tight areas, such as step surfaces or next to walls.

But this manual labor demands an uncomfortable work posture for a longer duration. Besides, the finishing crews should be large enough to correctly place, finish, and cure concrete slabs with due regard for the effects of concrete temperature and atmospheric conditions.

That’s why robots need to take up such tasks, reduce the human level of engagement, and increase productivity. In 1984, Takenaka Corp and Shimizu Corporation, known as the pioneers in the concrete floor finishing robot segment, introduced the first generation of the robot of this category, known as Mark-1.

The Mark-1 had a three steel-blade steel trowel, a manipulator arm, a host computer, a travel vehicle, a control panel, and an electric power panel with navigation, which facilitated automatic operation. This robot was heavy and required a complex set of the process before its operation.

In 1986, Mark-2 was introduced with a sophisticated design featuring a new trowel end-effector, bumper, and a travel vehicle. The navigation system was equipped with a gyrocompass, a measuring roller, and an 8-bit microcomputer. It had a diagnostic mechanism to assist the operator in case of failure. The obstacles sensor, which was fitted in the bot, allowed it to sense obstacles. The machine increased the productivity rate by approximately 67%.

The third generation, marketed as Kote-king, has further modifications and extra components such as a cable handler. Kote-king was modified to reduce the weight by making changes in the engine structure. This gave a much quieter engine. The newer version, named ‘Robocon,’ made the productivity go high by 700–800 square meters per hour. This post explores the designs and operations of a few other concrete finishing robots in the market.

Shimizu Flat-Kun Robot, developed by Shimizu Corporation, is a round-shaped vehicle fitted with travel rollers, a guard frame, a controller, and a power trowel. The travel rollers give mobility, allowing it to move in every horizontal direction. The power mechanism consists of three arms, with each component equipped with separate rotating trowels fitted at the end. The angle of the trowels can be adjusted to control the quality of the finished concrete surface. During the operation, each trowel rotates around its arm.

The entire trowel mechanism can also rotate about the central axis of the bot. The trowel assemble is powered by a gasoline engine. Simultaneously, a separate gasoline-powered generator produces power for the robot, eliminating the requirement for any cable wires for the electrical system. This increases the bot’s mobility. The Flat-KN bot can also be controlled remotely. The guard ring has a touch sensor that reduces the probability of collision.

Kajima Mark II, developed by Kajima Corporation, comes with a bumper unit, travel unit, and double trowel arms mounted at the travel unit’s end. The bot is electrically powered through a cable. The two-travel wheel provides the mobility of moving back-and-forth, allowing the machine to turn around on the same spot. It can be controlled either very automatically or manually.

The bot uses a self-navigation system on automatic mode, which consists of a measuring roller, gyrocompass, and a microcomputer. In the manual mode, the operation is conducted after feeding the data on the floor area’s length and width, operating conditions, and the starting point. All obstacles are detected through sensors mounted on the front side. Each trowel arm is equipped with three separate trowels mounted on end.

Takenaka SURF ROBO comes with two trowel arms, a controller, and two tracked drive units. The arm has four trowels attached to its end, capable of rotating in the opposite direction during the operation. The trowel blade angle can be adjusted to three different positions with maximum adjustment up to ten degrees. The rotational speed of the trowel arm can be adjusted from zero to 35 rpm.

Powered electrically through an external power source, the bot is equipped with a sensor, which detects the arm pressure. Two independent traceable drive units provide added mobility. This allows the bots to move in all horizontal-direction. The turning movement is achieved through the lifting movement of the trowel arm off the concrete surface. The bit can be controlled both automatically and manually. In manual operation, the data pertaining to dimensions of the work area is fed into the system. The bot can achieve a 3250 square feet productivity rate per hour, with a per-day production of 16000 square feet.

Ohbayashi Floor Troweling Robot resembles Kajima’s Mark-2 model. Compared to other robots in this category, this robot is capable of moving in any direction. It also comes with manual and automatic control. Its differentiating factor is its navigation system and lasers for determining the position.

Pre-operation, four lasers reflectors are placed on the corners of the work area. A panel of the laser transmitter and receiver, installed inside the bot, allows the machine to transmit a rotating horizontal laser beam and measure each reflector’s angle. This mechanism has a better navigating ability and has a position accuracy of +/- 5 cm and heading accuracy of +/- .5 degrees.