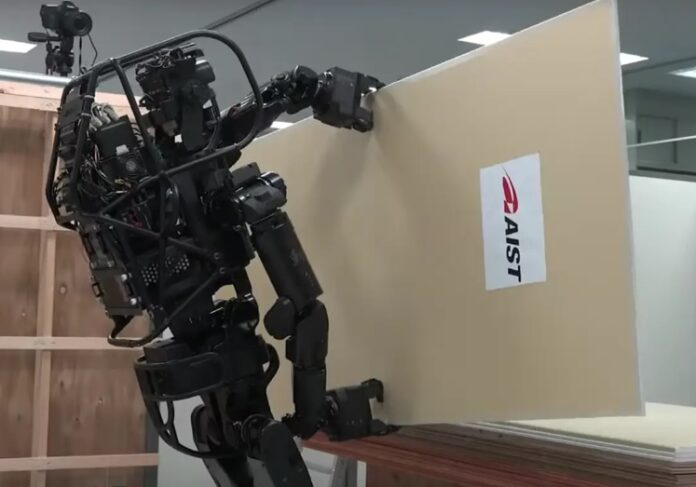 Interior finishing is an essential process in a building after it has been constructed. The interior finishing operations such as painting, plastering, tiling, wiring, plumbing; and heating, ventilation, and air conditioning (HVAC), typically take a lot of time and effort due to the higher demands for precision, lack of sufficient skilled labors, and repetitive, exhausting and hazardous nature of the process especially in large tall buildings.

Hence, there is a strong need for mobile robots to automate interior finishing works to satisfy the criteria of simplicity, low weight, low cost, and efficiency. The traditional robots used in several industries, including manufacturing and automobile, are not suitable for construction sites since they must carry bulky and heavy equipment and navigate the functional spaces alongside the workforce.

A reliable robotic system for interior ﬁnishing should meet several requirements. First, the robotic system should be mobile to cover a large environment and reach high elevations up to three ﬂoors (9-10) meters. Second, the robot should be adaptable to various deployed positions and the shapes of different architectural surfaces and corners. It should have higher load capacity, stability, and safety, needed to support heavy weights and equipment and reach high elevations. It should also adapt to environmental conditions and light variation in construction sites, such as high temperature, humidity, and dust.

To automate four interior finishing tasks, namely painting, plastering, tiling and masonry, Warszawsky and Kahane developed a robot “TAMIR” (Technion Autonomous Multipurpose Interior Robot) with 6 DOF (Degrees of Freedom) with an average reach of 1.7m and end effecter payload of 30 kg. Mounted on 3 wheeled mobile-robot, which gives another 3 DOF, the platform moves between workstations and deploys four stabilizing legs. The robot arm is the S-700 model made by General Motors, of 500 Kg weight.

Interior finishing robots are special types of robots designed to perform several interior finishing tasks. They are categorized by the nature of the tasks they perform. Some of the popular ones are as follows:

There is a high demand for painters in both developed and developing countries. Manual painting of ceilings is dangerous, physically exhaustive, repetitive, and time-consuming. Today, we can find many painting robots in the marker under this category, and the RoboPainter is one of them.

RoboPainter is capable of performing full-scale wall-ceil painting in addition to decorative wall drawings. It has 8 degrees of freedom (DOF), and consists of a 6DOF spray painting arm mounted on a 2DOF differentially driven mobile base. The painting arm carries a spray painting gun at its tip, and several commercially available painting guns can be attached to the arm tip. RoboPainter has its joints actuated by Maxon DC-geared motors, equipped with position encoders and torque-controlled using ESCON servo controllers.

Transforma’s Pictobot is another example of an intelligent mobile robot that autonomously scans, plans, and paints buildings’ interior. It can work efficiently and safely near human co-workers performing the repetitious and troublesome task of painting. It relieves workers of the arduous tasks, eliminating the need to work in proximity of hazardous spray particles and work at height.

Transforma has another model, QUICABOT, dedicated to building interior finishing inspection and assessment. Using different sensors and artificial intelligence (AI), it collects data and scans the interior finishing to automatically generate an assessment of different kinds of defects, such as cracks, unevenness, alignment, lippage, and more.

Another notable painting robot is PictoBot, that can work safely next to human co-workers performing the repetitive interior paint process at high elevations. PictoBot provides a way to combine the beneﬁts of automation in construction with those of human dexterity and ingenuity. Thus relieve individual workmen of the tiresome task and a lot of climbing, bending, kneeling, and reaching, freeing them to supervise the robot and painting walls at a low height.

This robot is designed with six primary subsystems: a 3-DOF mobile robot, a 1-DOF long-reach jack-up mechanism, a 6-DOF industrial robot arm, an airless paint pump, a painting head system, and a computer-controlled system. All spraying subsystems are mounted on the mobile robot that enables the robot’s free navigation within the construction site and sufﬁcient maneuverability to paint corners and surfaces. PictoBot is outﬁtted with a sensor-driven painting system via in-situ scanning and spray-gun motion planning, which adapt to the uncertainties of the construction environment and robot deployment from various positions. The robot ensures the advantages of collaboration in leveraging the worker’s safety and the quality of ﬁnishing due to the precise control of paint distribution. It also minimizes the paint dust, paint waste, and human exposure to harmful paint chemicals.

Among the several tasks carried out in the construction, applying the fireproof material to the structural component is considered one of the most unpleasant.

Shimizu Corporation Japan was the first organization to develop the fireproofing robot SSR1 to carry out such an unpleasant task without putting human life at risk. The robot was designed to spray the mixture of rock wool and cement fireproofing on structural steel members.

The first generation SSR1 came along with a manipulator’s arm, spray gun, oil hydraulic unit, and a travel unit. There was also a control panel for travel and spraying along with a supply plant. It was battery operated and guided with the help of cables, which was attached to the floor. It was pre-programmed, allowing smooth repetition of operation along the span of the structure.

The distance between the operator and the spray nozzle was 3 meters; this reduced exposure to the chemical solutions. Despite all of these benefits, it had some drawbacks like moving the unit from one location to another was time taking. The workers need to be trained for the unit’s operation, and maintenance and detailed preparation was required for each task and any changes in job scope.

These issues were considered while developing the SSR-2, which came with an ultrasonic sensor, allowing the machine to automatically adjust its position, pressurized delivery system, which allows the uniformity in a spray of the fireproofing mixture and an increased arm length for good coverage across the area. In the second generation of the SSR robot, the guide cable was removed, provided in SSR-1 for automatic travel. Apart from these new features, SSR-2 came with a special program, which enabled the robot to adjust its spray pattern concerning the building’s structure.

Though the second generation was better than its previous version, few problems still existed. Relocating the unit from one to another was time-consuming, and the operator required training to operate and maintain the unit. The spray of the solution was uniform in comparison to SSR-That was the only significant benefit, which was gained from the SSR-2.

Further improvements were made in SSR-2 to develop SSR-3. The hydraulic unit was removed; new control panels were introduced, making the unit smaller and lighter. The new robot could be controlled by a remote panel, which functions on the off-line teaching system. This allowed a decrease in “teaching” time by 5 minutes. The arm was modified, making it capable of tracing the shapes of the structural components. It made it capable of spraying the solution while remaining in motion.

Further, the new design eliminated the requirement of assembling and dismantling. It came as a preassembled unit, which needs to be, drag and dropped at the desired location. Despite all these benefits, the proper training of the operating staff remained the major issue. This is a classic example of an incremental development approach in the field of robotics.

The major activity in the interior work is the installation of boards on the wall, partition, and ceiling. For this, wallboard robots are used. For instance, the Taisei Wall Board Robot, also known as the BM.02 robot, was developed for installing large and heavy boards on walls and partitions. This manually operated robot supports the board in place while the worker fixes the board’s supporting frame. It uses vacuum suction pads to hold the board. The cart allowed additional storage and movement of 5 to 8 wallboards along with the unit.

The Shimizu Ceiling Panel Robot, also known as CFR-1, was designed to fix lighter boards on ceilings. The machine is placed just below the area where the first panel is installed. Once the first panel is lifted and placed, the system automatically adjusts its adjacent panel position. CFR-1 eliminates the need for scaffolding; it reduces the labor and brings down the cost.