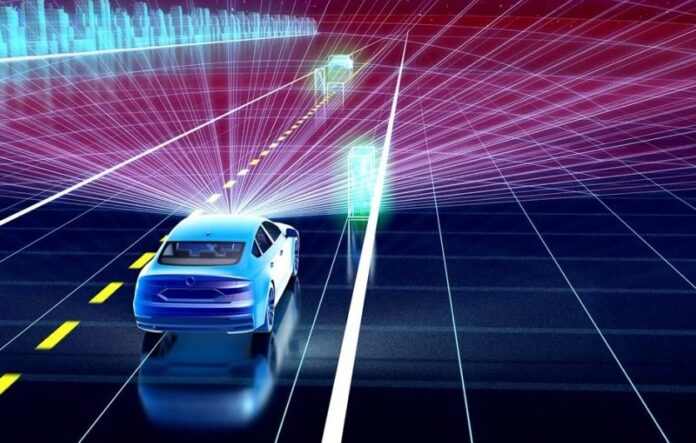 LiDAR (light detection and ranging) is a distance-measuring technique that employs a laser. A laser scanner sends out pulses of light. A portion of the photons emitted by the pulse is reflected back to the scanner when it hits a target. Since the direction of the pulse and the time between pulse emission and return are known factors, the 3D location from which the pulse is reflected is calculable. The laser produces a highly precise 3D point cloud (model) that can be used to estimate the 3D structure of the target area by emitting millions of such pulses and recording where they reflect.

How are LiDAR data collected?

The scanning laser is commonly mounted in an aircraft – usually a fixed-wing plane, but increasingly in drones – and scans the ground along the flight path or direction. For terrestrial-based laser (TLS) scans, scanning lasers are occasionally mounted on a tripod or vehicle.

What can LiDAR data do?

LiDAR data creates a detailed three-dimensional model of the target area, including terrain, topography, and vegetation. The digital terrain model of the surface can then be used to generate various additional products, such as slope or visibility models. The 3D data on the vegetative structure can be used for a variety of forestry and ecological applications.

Are LiDAR and Airborne Laser Scanning the same thing?

Airborne laser scanning, or ALS, is simply LiDAR data collection from an aircraft while it is in the air. If the LiDAR scanner is mounted on a tripod, the method is known as Terrestrial Laser Scanning or TLS.

What is the difference between a pulse and an echo?

The scanning laser produces a pulse. A clump of timestamped photons can be compared to the pulse. When the pulse hits a target, some photons reflect back as eco, which the LiDAR device recognizes. As a result, an echo source is a location where photons were reflected after being hit by a pulse. Multiple echoes can be produced by a single pulse, and this happens frequently.

What is the resolution of LiDAR data?

Do I need LiDAR, or will other data suffice?

Photogrammetry, satellite, or aerial imagery may be sufficient, depending on your goal. LiDAR, on the other hand, provides excellent precision 3D structural information about a target area (be it forest or terrain), albeit at a relatively high cost. LiDAR data is sometimes combined with other remote sensing data to produce insights that neither data could achieve on its own.

How can I acquire LiDAR data?

Many countries have already gathered large amounts of LiDAR data for topographic mapping and forestry, and these data are often freely available. If LiDAR data isn’t available for your area of interest, you’ll have to decide whether it’s worth the money to collect it.

How much does it cost to collect LiDAR data?

The most expensive part of ALS or airborne LiDAR is the aircraft operation, determined by factors such as the study site’s distance from the nearest airport, fuel costs, altitude, pilot time, and weather. These prices vary by geography and time, and the size of the target area makes it difficult to make broad estimates. As the size of the surveyed area grows larger, the cost per unit area typically decreases, and large scales can be quite cost-effective. The availability of drones lowers the cost of collecting small-scatter data, and terrestrial laser scanning systems are becoming more compact and affordable.

What do LiDAR data consist of?

Each received echo information is stored in the data. In a text (.txt) format, for example, the data is frequently structured so that one row contains information from one echo, such as its XYZ coordinates, intensity, and order if there are multiple echoes.

How are LiDAR data different from aerial or satellite imagery?

Aerial and satellite imagery, like a photograph without a flash, is considered passive because it records reflected sunlight. In other words, because the sensor does not emit any light, the light source is external. LiDAR, meanwhile, is an active remote sensing method thanks to its emitted light pulses. Furthermore, unlike imagery, LiDAR data does not contain spectral data; instead, LiDAR data contains structural information in 3D coordinates and the intensity of each echo.

Do I need to ground-truth LiDAR data?

Because LiDAR data are not interpreted as imagery and highly precise (most commonly within 5-15 cm), ground-truthing of the point cloud structure for 3D mapping is generally unnecessary. The ground-truthing may be necessary if you study something other than physical terrains, such as whether.

What format do the data come in, and how large are the datasets?

Can the LiDAR data format be changed?

Many other formats, including plain ASCII files and ESRI shapefiles, can convert the data. The only practical limitation is size: loading and processing a point shapefile with 20 million points in GIS software would be extremely slow. Many common LiDAR processing programs include conversion tools.

What programs are available for processing LiDAR data?

Many programs have been tailored specifically for processing and analyzing LiDAR data. The most common GIS and remote sensing programs can process LiDAR data in LAS/LAZ format.

Can LiDAR data be used without any processing?

No, in most cases. The chain must scale the heights (Z-coordinates) of the LiDAR echoes to ground level during core processing. Each echo has a Z-coordinate that indicates its height above ground level, though the data is often processed for a fee by the service provider who collects it. Separating the ground echoes from the other echoes is the first step. Finally, subtract the terrain model from the height of the echo in the LiDAR data to create a terrain model from the ground echoes. This effectively scales all of the echoes to a scale that is above ground level.

How do I use LiDAR data in my analyses?

The first step is to define your target area and extract relevant, manageable data from a larger LiDAR data set. You’ll have to rescale the data frequently after that, as described in the previous question. Then you calculate relevant metrics from the available 3D point clouds, such as canopy height or density, for example. The adaptability of LiDAR data to suit individual needs and derive myriad metrics of 3D structure is its beauty, even though it is time-consuming and relatively complex to work with.

Can the point cloud data be converted into rasters like satellite images, for instance?

There’s no reason LiDAR data can’t be turned into rasters. LiDAR data is still frequently used to derive habitat structural variables, which are then converted to rasters. For example, in some forestry applications, it is common to divide the study area into 16 x 16-meter grid cells and extract LiDAR data from each cell. The point clouds within each cell are used to calculate forest structure variables, which are then incorporated into a raster with the same dimensions. Digital terrain and canopy models, as well as height models, are common raster products from LiDAR.