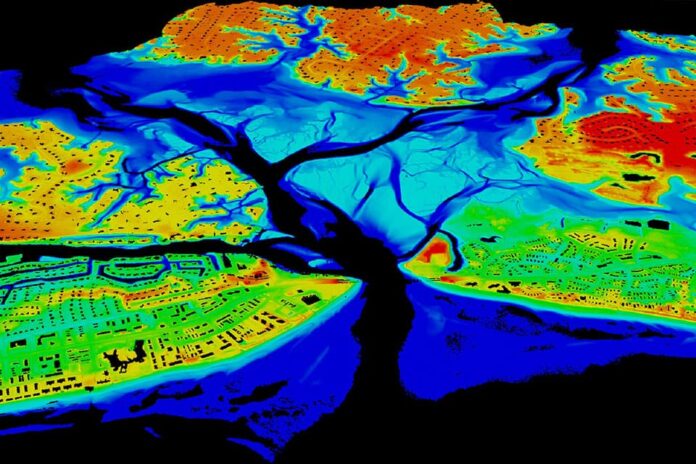 LiDAR, an acronym standing for Light Detection and Ranging, is one of the backbones of the remote sensing methods acquiring high-density and high-accuracy geo-referenced data about the shape and its surface characteristics of the Earth.

It uses light in the form of a pulsed laser to measure ranges and generate precise, wide-range three-dimensional geospatial information about the object on the Earth and its surface characteristics.

LiDAR is generally recognized as a major technological revolution after the global positioning system and is the leading research foreland of high-precision surveying and mapping. LiDAR has passed through many impressive development stages since the first attempt to use laser for distance measurement. Let’s briefly look at the history and the evolution of LiDAR in the past decades.

LiDAR became very popular after the invention of Ruby Laser, created by Theodore Maiman in 1960. Theodore Maiman and team at Hughes Research Laboratory shined a high-power flash lamp on a ruby rod, triggering a beam of coherent light – the first laser.

It was used in range measurement in earth observation, environment monitor, and reconnaissance fields, because of high precision, high resolution, low volume, and easy usability, compared to general measurement methods.

Soon, similar to other technology, laser caught the attention of the military. Soon the U.S. Army began research into military laser devices, and the first military laser range finder passed military tests in 1961.

Due to the disadvantage of large volume, heavyweight, high power consumption, and other shortcomings, it was soon replaced by the second generation ranging system, which used near-infrared neodymium laser (mainly Nd: YAG laser) PIN photodiode or avalanche photodiode.

This technology became more mature, used in long, medium, and short-range laser ranging radar and became an inevitable trend as YAG laser technology was ripe in the 1970s.

In 1977, the United States developed the first hand-held Nd: YAG laser rangefinder: AN/gvs-5 with the size of the standard 7-50 military binoculars and a total weight of only 2kg. From the late 1970s to the mid-1980s, laser rangefinder became the largest procurement in the military laser market.

Firstly, laser ranging was mainly used in military and scientific research. It was rare in the industrial instrument as laser ranging sensors were too expensive, typically in the thousands of dollars; high prices have been the main reason hindering their widespread use. However, due to significant technological advances, the price has dropped to a few hundred dollars, making it possible to become a cost-effective means of detection for many long-range inspections in the future.

In the process of using, some shortcomings such as low accuracy under all-weather ranging poor compatibility and damage to the eyes were gradually exposed. Later, with laser and electronic techniques, a third-generation laser ranging system was introduced with smaller size, low power consumption, and high accuracy. Alongside, different kinds of ranging laser systems were developed, including single-beam, two-dimensional, three-dimensional laser ranging systems.

With new optical systems and signal processing in the 1980s, various products kept appearing in the 1990s. In 1996 Bushnell launched the 400 LD laser rangefinder Yaddaga400 with the range-finding capability of 400m, which was rated as one of the 100 important scientific and technological achievements in the world.

In 1998, Tasco developed an LD Laser range finder, a camera type with a range measuring capacity of 800m. Since 1995, the development of eye-safe semiconductor laser ranging technology has been very rapid; research on laser rangefinder has been carried out within the range of 800nm-900nm, with peak power of 10W, a pulse width of 20-50ns, repetition frequency of 1-10khz, and measurement distance of 10m-1km.

A high-precision laser rangefinder was developed and produced by BOSCH. It was small and easy to carry and use in real estate, interior decoration, construction, surveying and mapping, and other fields. The DLE150 laser rangefinder, developed by this company, can measure precisely and detect very quickly，its measurement range is between 0.3m to 150m. The measurement time is generally less than 0.5 seconds, with the accuracy down to ±3mm. Using advanced software technology, it can measure height, Angle, area, and volume.

In the 1980s, laser rangefinders developed by China Aerospace Science & Industry Corp achieved an accuracy of 0.5 meters within 200 meters. At the same time, satellite-borne ruby laser rangefinder and airborne laser rangefinder for complex terrain mapping were developed. Before 2007, most research on LiDAR remained at the stage of theoretical experiments in universities and research institutions; the main equipment depended on imported products.

Benefiting from the rapid development of the information industry and LiDAR technology, the market of hardware and data products in LiDAR has been growing at an annual rate of over 30%.

With the booming research of unmanned aerial vehicles (UAV), a series of emerging laser radar manufacturers have emerged, such as SureStart, RoboSense, LeiShen, SLAMTEC, and other start-ups. Their products were gradually recognized by the market and put into use in the field of autonomous driving.

After decades of evolution, LiDAR has become mainstream technology for surface data acquisition for various large-scale surveying applications. The overall LiDAR market is expected to reach $5.2 billion by 2022.

Compared with the ground survey or photogrammetry method, LiDAR technology captures the 3D coordinates easier and quicker; it gives accurate data of the elevation of the ground and shows the 3D imaging of the elevation. Using detailed terrain modeling, soil scientists can research the changes in landform breaks and changes in slope, which show a pattern in spatial relationships. Besides, a surface model created from LiDAR is used to add graphical value to maps. DEM (from LiDAR) is added underneath all layers that show the 3D view of the land. Especially LiDAR data (DEM) is added to aerial photography to show the 3D view, making it easier to plan roads, buildings, bridges, and rivers.

A digital street map is a key to car navigation and visualization. More and more maps are rich in 3D information nowadays, which can be used for autonomous driving and smart city management. For instance, HERE Technologies collect point cloud data along streets from over 200 vehicles; each vehicle is equipped with a raised platform with a laser scanner, camera, and GNSS/IMU system. The scanner uses the Velodyne HDL-32E, which can collect up to 700,000 points per second with accuracy is about 2cm, providing important information for digital street maps, so a detailed route map is generated to analyze slopes and navigate.

The measurement of the forest canopy is not easy. The data collected by measurement techniques are not usually accurate. LiDAR measures the height and density of vegetation on the ground, making it an ideal tool for studying vegetation over large areas.

This data helps in extracting the exact information below:

Because of the traffic stop, it is difficult to determine and measure the damages caused by earthquakes. With the help of LiDAR technology, it is now easy to collect the data before and after the earthquake occurs to assess the damage and benefit in future prevention. For instance, MA Hong-Chao and his team from Wuhan University use airborne LiDAR to gain precise DEM data acquired from the Tangjiashan and Yingxiu areas in Wenchuan Earthquake Relief works.

LiDAR has several uses in the military. The military depends on LiDAR to map out the exact terrain of the battlefield and know the exact position of the enemy and their capacity. It can locate all enemy weaponry, including tankers, and help in neutralizing the threat on a much larger scale. For instance, Lincoln Laboratory develops a LiDAR device that produces high-resolution 3D images using short laser pulses and a focal-plane array of 32×32 Geiger-mode avalanche photodiodes with independent digital time-of-flight counting circuits at each pixel.