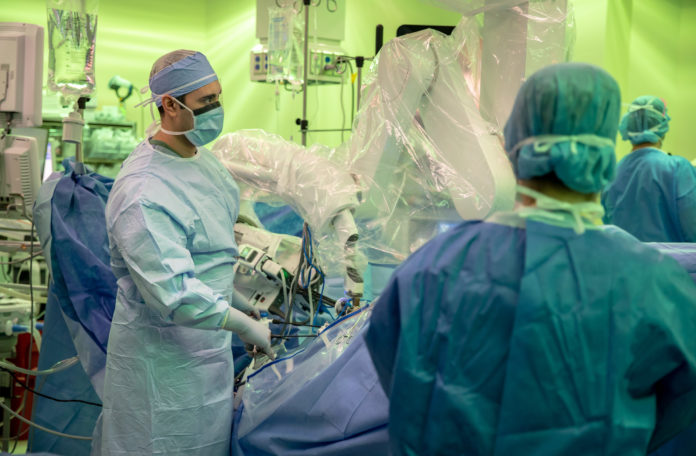 Since its introduction, computer-aided and robot-assisted surgery (RAS) has been rapidly adopted to the extent that it has already assumed an essential position in minimally invasive surgery (MIS).

Although early studies expressed concern that the field was in its infancy and lacked the data required to substantiate its widespread use and safe application, the multiple advantages of robotic surgery were widely recognized even at that early point in the history of robotics in the largest surgical specialty.

Its ability to have wristed instrumentation with more degrees of motion than the human hand and facilitate the creation of anastomoses with superior dexterity, along with more advanced ergonomics and excellent visualization with three‐dimensional capability, and the presence of more than two arms to execute tasks, offer total control of the procedure.

With these advantages, robotic surgery has been rapidly adopted in many advanced surgery fields, such as urologic, gynecologic, and cardiac surgery, gaining recognition in more difficult and complicated cases. 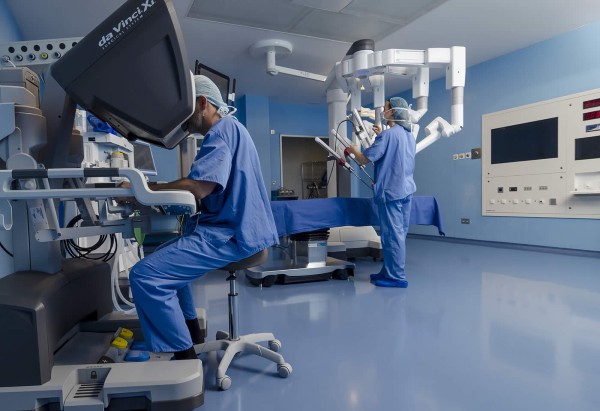 Since FDA approval in 2011, the da Vinci robotic surgery system has been involved in over 5 million surgeries during its 20-year development. It is the most commonly used robotic modality in the United States. Intuitive Surgical, which dominated the surgical robotic market and maintained a considerable market share for a significant period of time, released the da Vinci’s latest model, the Xi, in 2014. The Xi consists of a four-armed operating cart (single arm unit available with the da Vinci single port model), a mobile platform, and a master console.

The cable-driven joints allow for the manipulation of the surgical instruments located on each robotic arm’s distal ends. The robotic arms are boom-mounted, with capacity for 3 degrees of freedom (DOF). An additional 7 DOF can be achieved with the use of the EndoWrist system that mimics the movements of the human wrist.

Visualization is achieved utilizing a versatile 8-mm camera that can be used on all four ports, allowing for a more diverse operations repertoire. The immersive master console (“surgeon console”) provides a three-dimensional (HD-3D) magnified view of the surgical field closed to the rest of the OR. Telemanipulators control the robotic arms and laparoscopic instruments, with adjustable master-slave finger-cuffs. The da Vinci system provides high-resolution 3D visualization, motion scaling, and a convenient user interface to improve surgical accuracy and dexterity.

The system’s major drawbacks are its cost of $2 million per surgical system and the size. The size necessitates dedicated operating theatres and limits the ability to switch instruments quickly during operation as the console design separates the surgeon from the patient. There is also a lack of haptic feedback from the da Vinci, which gives the user a tactile feel. Instead of being translated into tactile sensations, force is displayed visually.

Studies show decreased complications and length of stay relative to the open surgical approach, which may provide some cost-benefit for the hospitals that can afford their system and accommodate their size. The da Vinci system’s large size and high cost pose significant barriers to robotic surgery utilization in smaller, resource-constricted areas.

In 2017, the robotic platform type Senhance console, previously the TELELAP Alf-X system, received FDA approval. In contrast to the immersive da Vinci console, this platform consists of an open remote control station with a connexion node, and four individual manipulator arms, each mounted on their own cart. Instruments are operated similarly to da Vinci, with arms mounted on the boom offering 3 DOFs. The surgeon’s console contains a 3D-HD screen, which is used to achieve visual depth with 3D glasses. 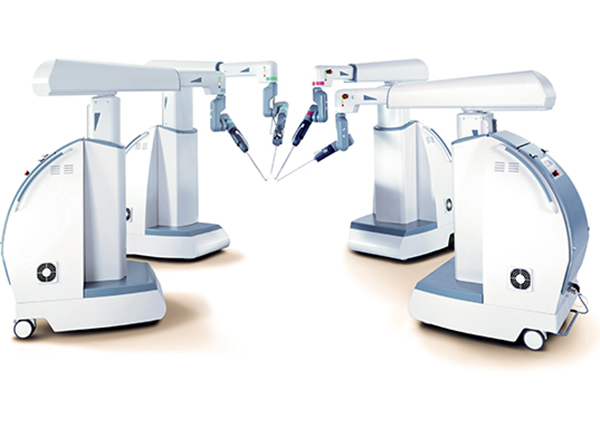 The Senhance system offers haptic feedback and novel eye-tracking software advantages. Early studies in Europe and the United States show comparable results in a range of abdominal, gynecological, and urological surgeries with the da Vinci system. Senhance ‘s disadvantages are similar to the da Vinci system in that it is prohibitively large and costly (about $1.5–2 million). Traditional laparoscopy is limited to movements in the Senhance system. Although Senhance offers novel technology, its individual carts may pose a greater barrier to robotic surgery, highlighting the continued need for smaller operating systems.

Rob Surgical’s BITRACK system offers yet another robotic alternative to the da Vinci system. This system stemmed from a collaboration between the Polytechnic University of Catalonia (UPC) and the Catalan Institute of Bioengineering.

The BITRACK system advanced through technical development in 2018, and FDA/CE approval processes have begun with projected availability by 2021. BITRACK consists of a single cart with three robotic arms and an open format console for surgeons. BITRACK compatible instruments have the wristed capacity of 7 DOF. Robotic arms are mounted on a flexible floating fulcrum, which proposes to improve the accessibility and access of the surgical cart around different positions of the patient. 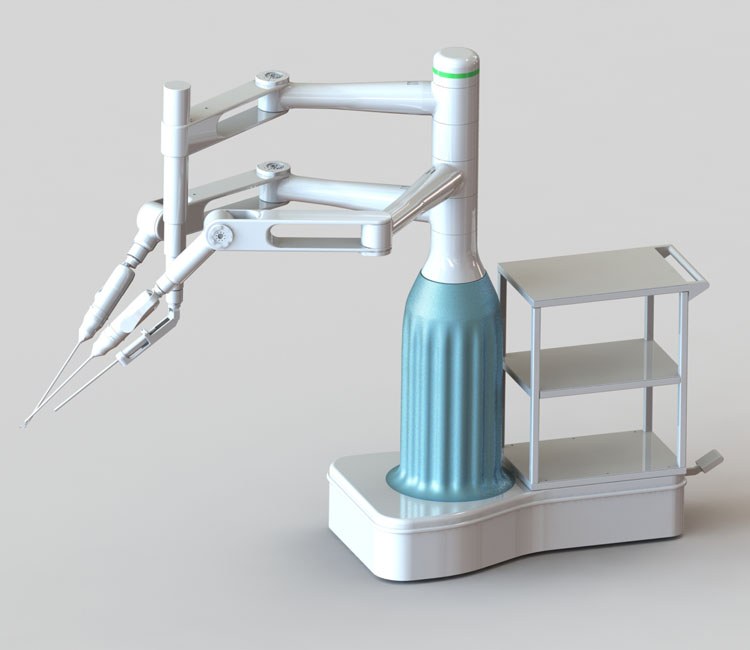 The BITRACK system provides a hybrid surgical approach with only three arms, with robotic and laparoscopic instruments for simultaneous use during operation. The master console allows visualization via a 3D-HD screen. The console has a positioning function guided by a laparoscope, and the instruments are manipulated with a hepatic feedback function via telemanipulation.

The advantages of the BITRACK system over the da Vinci are the relatively smaller size and lower cost estimates. Overall, the BITRACK occupies less space within an Operating Room (OR) with a single-column design and an open console, slightly decreasing the need for additional space in hospitals. BITRACK’s most recent research comes from its preclinical certification in pig models, though human studies are expected to be processed as CE / FDA approvals.

Revo-i surgical robot is a minimally-invasive, multiport robotic surgery platform developed by Meere Company. The latest model of the company, MSR-5000, was released in 2015 and was approved by the Korean Food and Drug Safety Ministry in August 2017. The component of Revo-i is nearly identical to that of da Vinci: an operating cart with four boom-mounted arms, a mobile platform, and a master console. 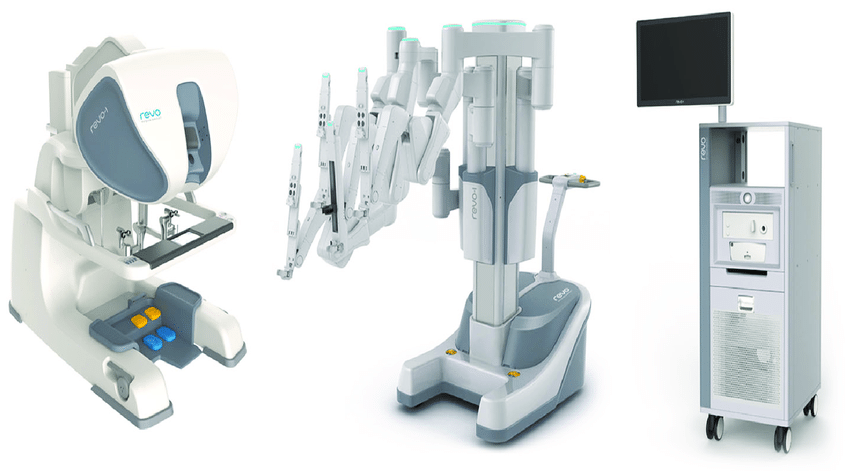 The slave patient cart enlists four robotic arms with 3 DOF and gives an additional 7 DOF to surgical movements. The immersive master console achieves visualization for instrument control by means of a 3D-HD projection with telemanipulators. The hepatic feedback is one significant advantage Revo-i offers over da Vinci. Preclinical trials demonstrated the feasibility of using Revo-i for nephrectomy, cholecystectomy, and gynecological procedures in porcine models.

No information on the cost of the system is currently available. However, the company states that its reusable instruments can be used twice as long as the laparoscopic instruments by Intuitive (20 vs. ten times). Unfortunately, the size limitations that da Vinci faces also apply to this new system. It still places a considerable burden on hospital acquisitions and hampers the wider use of robotics.