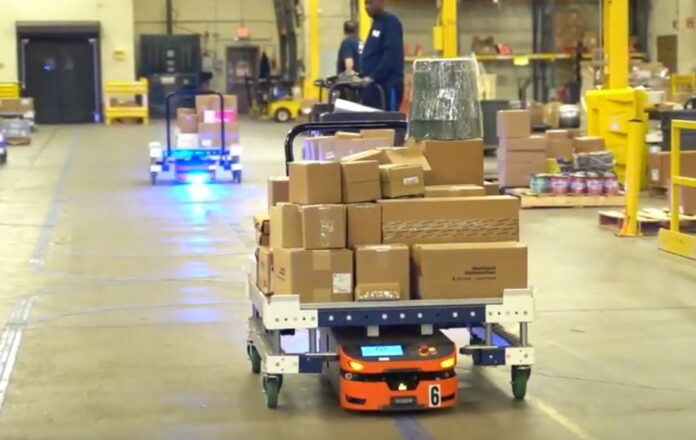 An automated guided vehicle (AGV) is a portable robot that follows marked lines or wires on the ground or uses radio waves, vision cameras, magnets, or lasers for navigation.

They are most frequently utilized in industrial applications to move heavy materials around an outsized industrial building, like a factory or warehouse. AGVs are employed in almost every industry, including pulp, paper, metals, newspaper, and manufacturing.

The AGV can tow objects behind them in trailers to which they will autonomously attach. The AGV also can store objects on a bed. The objects are often placed on a group of motorized rollers (conveyors) and then pushed off by reversing them.

They require intelligent routing for the AGVS to work efficiently and handle priorities and time schedules. Static routing, using a railway system with course sections like tracks, is a well-established standard in navigation; however, various navigation techniques are currently being used to increase the flexibility of the whole production system in manufacturing. Let’s now explore six major navigation techniques used in automated guided vehicle systems.

The wired navigation method relies on wires inserted into a slot about an inch below the floor along the AGV’s path. The relative position of the radio signal being transmitted from the wire is detected by a sensor mounted on the base of the AGV, close to the ground. The steering circuit is then controlled using this information to make the AGV follow the wire.

This technique deploys magnetic or colored guide tapes for AGVs to follow. The AGV is fitted with the correct guide sensor to follow the trail of the tape. The main benefit of tape over wired guidance is that a course change can be easily accommodated by simply removing and moving the tape. Colored tape is initially less expensive, but it cannot be embedded in high-traffic areas where it might get dirty or damaged. A flexible magnetic bar also can be embedded within the floor like wire but works under an equivalent provision as mag tape, then remains unpowered or passive. Another advantage of magnetic guide tape is its dual polarity. Small pieces of mag tape could also be placed in various states of the AGC-supported polarity and sequence of the tags.

Reflective tape is mounted on poles, walls, or stationary objects to facilitate this navigation. The laser is transmitted and received by the same sensor on the AGV’s rotating turret, equipped with a laser transmitter and receiver. Automatic calculations determine the range, angle, and distance of any reflectors in the line of sight. This data is contrasted with the map of the reflector layout that is kept in the memory of the AGV. This makes it possible for the navigation system to triangulate the AGV’s current location. The path pre-programmed into the reflector layout map contrasts the current position. To keep the AGV on the course, the steering is adjusted appropriately. It can then use the constantly updating position to navigate to the desired target.

A computer system that controls and assigns vehicle tasks aids in inertial guidance. The AGV uses transponders embedded in the workplace floor to confirm that the vehicle is on course. A gyroscope can detect the smallest change in the vehicle’s direction and correct it so that the AGV continues on its intended course. The inertial method has a 1-inch margin of error. Inertial can function in almost any setting, including narrow aisles and high temperatures.

Evidence Grid technology, a form of probabilistic volumetric sensing used by vision-guided AGVs, uses occupancy probabilities for each point in space to make up for sensor and environmental performance uncertainties. Specially created stereo cameras serve as the primary navigational sensors. The vision-guided AGV creates a 3D map from 360-degree images and uses it to direct the AGVs along a predetermined path without the aid of additional features, landmarks, or positioning technologies.

A geo-guided AGV locates itself by recognizing its surroundings. The forklift with geo-guidance technology detects and recognizes racks, walls, and columns inside the warehouse without the aid of any infrastructure. Using these fixed references, it can position itself in real time and map its route. There are no restrictions on how far you can travel to multiple pick-ups or drop-off locations. Routes can be changed in any way.