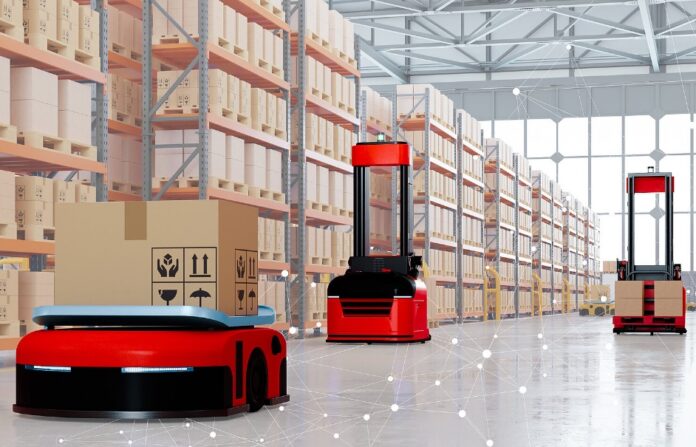 An AGVS consists of one or more computer-controlled, wheel-based load carriers (normally battery-powered) that run on the plant or warehouse floor (or outdoors on a paved area) without needing an onboard operator or driver (MHI).

Modern AGVs are adaptable and use cutting-edge microprocessor technology to steer a vehicle along a predetermined path and correct if it veers off course. Direct commands from the host computer are received by a system controller, which also interacts with other vehicles and sends the proper commands. To prevent collisions and make communication easier, they are connected by a wire on the floor or by radio.

AGVs offer numerous benefits in manufacturing and warehousing, such as:

The AGVS forklift truck applications are somewhat more recent. These systems are used when it is necessary to automatically pick up and drop off loads from the floor or stand levels and where the heights of the load transfers vary at stop locations. Without human intervention, these systems can pick up loads and discharge them where needed. Two forks on the vehicle can rise between one and two meters, allowing the load from various pallet heights to be handled.

Tow tuggers or driverless trains are two of the most frequently used and applicable AGVS in various industrial sectors for moving large quantities of goods into and out storage facilities or directly to production or assembly areas. These trucks or trains are effectively used to transport large quantities of cars to assemble or manufacture automobiles.

To allow trains to be loaded or unloaded off the main line and not impede the movement of other trains on the main path, side path spurs are typically installed in receiving or shipping areas. It is also common to move products in a chain using AGVS trains. In this instance, products are loaded onto the AGVS trains for specific locations along the guide path route. The train will stop several times to unload the goods at the proper locations.

Train systems are typically used for long-distance product movement, occasionally between buildings, outdoors, or massively distributed systems with long runs. This becomes a very effective method because each train can carry up to 16 pallet loads simultaneously. Cutting out fork trucks or manual trains and operators can usually be easily justified.

Unit load carriers are useful to carry a unit load from one station to another. They typically involve particular mission assignments for moving each load separately. Unit load carriers are quite common in applications integrating conveyors with manufacturing/assembly processes or storage retrieval systems. They are a very effective method of horizontal transportation between material handling subsystems that require a lot of hardware. The unit load carrier connects other automated subsystems in an integrated facility by transporting large quantities of goods over short distances. Unit load systems typically involve automatic product pickup, delivery, and remote management of the system’s vehicles.

Lifting, moving, and transporting palletized loads is what AGVS pallet trucks are intended to do. It is used to lift or lower loads onto the floor, eliminating the need for fixed-load stands. The only additional equipment required for loading and unloading the AGVS pallet is that the loads must be on a pallet. Floor-level loading and unloading operations make use of it. There are two ways to load and unload: automatically or manually. The destination of the storage area determines the normal course the vehicle takes when transporting the load.

AGVS assembly line vehicles are light-load transporters for applications involving serial assembly processes. Major sub-assemblies like motors, transmissions, or even entire cars are carried by the guided vehicle. The following assembly operations are carried out as the vehicle moves from one station to the next. The vehicle moves to an assembly area and stops there after loading the part onto it. The operator releases the vehicle as soon as the assembly is finished and moves on to the area where new parts are staged. The vehicle then advances to the following assembly station. Up until the last unloading station, the procedure is repeated. Compared to “hard” assembly lines, the AGVS assembly line’s main advantages are its lower cost and ease of installation. By modifying the guide path and reprogramming, the line can be quickly reconfigured. Programming variable speeds and dwell times into the system is simple. However, extensive planning and sophisticated computer control are required in the case of overall integration.