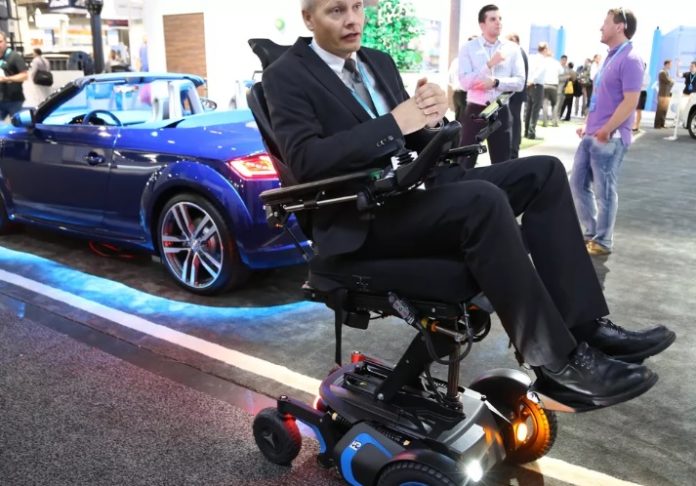 Brain-Computer Interface (BCI) based smart wheelchairs use electroencephalography (EEG) data from the brain and convert it into device control commands with the use of signal processing techniques. It records electrical brain signals from the scalp, where the brain signal originates from postsynaptic potentials.

These smart wheelchairs use electrical currents or EMG signals, generated in muscles during their contraction representing neuromuscular activity. EMG signals are collected from the muscles to control signals for the movement of the wheelchair.

These smart wheelchairs use EOG signals and detect eye movements and blinks, which are codified as wheelchair control commands. When the eyes are rolled up or down, positive or negative pulses are generated.

In this technique, the chin is placed in a joystick in the shape of a cup and is controlled by neck movements (flexion, extension, and rotation).

In this technique, wheelchairs use a screen-based eye-tracking system in which a camera is used to track eye features continuously. After a calibration algorithm is used to find the direction of the eye gaze in real-time. According to the gazed position, the screen movement control signals are calculated to control the wheelchair.

This technology is based on the law of Faraday. The permanent hall effect sensor is attached to the tongue and traces the tongue movement. The output signals are collected as the tongue moves in the induction coil of the air core.

A webcam is used to capture image input from the user’s finger. An image processing algorithm detects finger movement and wheelchair movement in left-right or front-back direction depending on the course of the finger.

Wheelchairs based on accelerometer use either an acceleration sensor or a tilt sensor. When an object is tilted, the values are recorded by the sensor and sent to the microcontroller. Depending on the tilt direction, the microcontroller controls the direction of the wheelchair.

This approach uses environment vision as a control interface. To move, the user specifies the location within the environment to which he wishes to go by pointing to it on the interface. Then the wheelchair will automatically move to that position.

In this technique, the user speaks in microphone, and the voice recognition system compares the voice command with the pre-stored memory and generates a control signal to control wheel movements.

Developed in a partnership between DEKA and Toyota in association with its inventor Dean Kamen, iBot is a stair-climbing wheelchair, first unveiled in 2001. Its “standing” configuration could climb stairs, raise users from sitting level to eye-height, and travel at a steady walking pace. The product was discontinued in 2009, however. Toyota and DEKA formed a partnership in 2016 to produce a new version of the iBOT.

Ability in Motion is a standing wheelchair designed to assist all people with function mobility problems in the lower limbs to maneuver independently in small and confined spaces and perform standard daily routines. Made by Australia’s Duchenne Foundation in association with Perth-based researcher Dr. Jenny Downs, it allows the user to reach the standing position by pushing a button and move forward while upright.

Life & Mobility is an advanced prototype of the smart wheelchair developed by SAP Netherlands to help wheelchair-bound patients who are unable to control or change their sitting position on their own.

KD Smart Chair is working with the Jacobs School of Engineering at UC San Diego to develop an open-source, low-cost, powered wheelchair that uses assistive and autonomous navigation technologies. The team has developed a new 59-pound wheelchair capable of traveling across a variety of terrain.

Below is a list of institutions around the world that have produced a prototype smart chair since 2005.