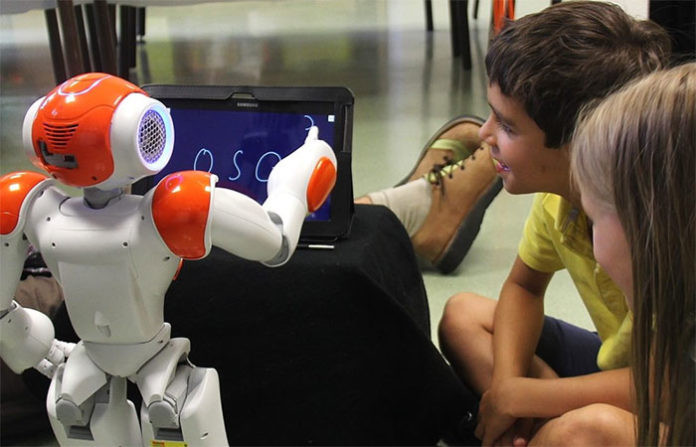 Most commonly, they take the form of a software system that supports one-on-one tutoring. Social interaction enhances human learning, both cognitive and practical. Researches suggested that some of these behavioral influences also translate into robots-humans interactions. While robots without social behavior can be used as educational tools to teach students about technology, we limited our review to robots specifically designed to support education through social interactions.

Since virtual agents (presented on laptops, tablets or telephones) can offer several of the same capabilities, it is explicitly necessary to justify the use of a robot in an educational setting without the cost of additional hardware and maintenance as well as distributing and installing difficulties.

Robots offer three benefits compared to virtual agents: 1. They can be used for resumes or populations that require physical involvement. 2. For a robot, users show more social behaviors to learn. 3. When robots are utilized over virtual agents, users show increased learning gains.

Robots are a natural choice when world physical manipulation of the world is necessary to instruct material in a classroom. In many rehabilitation or therapeutic applications, tutoring physical skills, such as handwriting or basketball-free throwing, with a virtual agent, can be more difficult.

Moreover, robot tutors are often expected to move through dynamic and populated spaces and manipulate the physical environment. Although not always required in the educational context, there are some scenarios where the learning experience benefits from the robot being able to manipulate objects and move autonomously, such as supporting physical experimentation or moving to the learner rather than the learner moving to the robot. These challenges are not exclusive to social robotics and robot tutors, but the added elements that make the robot work near and with (young) learners add complexities that are often ignored in navigation and manipulation.

Compared to instructions from virtual characters, robots videos, or audio lessons, robots have produced faster learning in cognitive puzzles. When coaching users to choose healthier snacks and help users to continue a 6-week weight loss program, similar results have been shown. A comprehensive review concluded that a robot’s physical presence led to positive perceptions and increased task performance compared to virtual agents or robots on screens.

Using technology to support education poses several challenges. Using a social robot adds to this set of problems due to the robot’s presence in the social and physical environment and user expectations. The interaction’s social element is particularly difficult to automate: while robot tutors can function independently in restricted contexts, in unconstrained environments, social tutoring conduct remains completely autonomous.

The perception of the social world is the first step towards proper action. Robot tutors should not only be able to understand the responses of the user to educational content correctly, but also to interpret quick and nuanced social indications that signal task involvement, confusion, and attention. While automatic speech acknowledgment and social signal processing have improved in recent years, not all populations have made enough progress. For example, speech recognition for younger users is still not robust enough for most interactions. Alternative input technologies, such as touchscreen tablets or wearable sensors, are used instead to read learner responses and can be used as a proxy for student engagement detection and monitoring of student performance.

In a specific context and strategies, such as activity switching, robots may also utilize explicit models of disengagement to sustain interaction. In recent years, computer vision has taken significant steps but is still limited when it comes to the diversity of contexts and social expressions typically found in educational and home environments. While advanced sensing techniques for the reading gesture, posture and gazes have become robots for learning robots, the degree to which most social robot tutors can accurately interpret the social behavior of the learner is still limited.

Irrespective of the social signals being read from the student, the robot must choose an action that promotes the long-term goals of the education program. However, this can often be a difficult choice, even for experienced human trainers. Should the instructor go ahead and try another problem, move on to a more challenging issue, examine how the current problem can be resolved, give an idea, or even offer a brief pause? There are often contradictory educational theories in human-based instruction, and it is an open question if these theories hold when considering robot instructors. These options are also present in an ITS, an on-screen avatar, or human tutoring, but explicit agency character of robots often introduces additional options and complications. Choosing a suitable child-affective emotional support strategy, helping with a metacognitive learning strategy, deciding when to break and promoting adequate behavior-seeking assistance have all demonstrated a stronger learning advantage for students.

Combining such actions with proper gestures, appropriate and congruent behavior, expressive behavior, and behavior, which guide attention, and timely nonverbal conduct also have a positive effect on the learning of students. However, merely increasing the social behavior of a robot does not improve learning gains: some studies have found that social behavior. Instead, the social behavior of the robot must be carefully designed in conjunction with the context and task in question to improve educational interaction.

Last but not least, extensive research has been conducted, focusing on personalizing user interactions and computational techniques such as dynamic Bayesian networks, fuzzy decision trees, and hidden Markov models are used to model student knowledge and learning. Robot tutors use the same technology as on-screen tutoring systems to tailor the complexity of problems to the student’s abilities, creating complex problems only when easier problems are mastered. Besides selecting specific content, robotic tutoring systems often provide additional personalization supporting different learning styles and interaction preferences. Simple forms of customization, such as using a child’s name or referring to personal information in an educational environment, can increase user interaction perception and play an essential role in ensuring learning commitment.

Additional personalization strategies to maintain engagement during learning interactions were explored by strengthening learning to select the robot’s affecting responses to children’s behavior. A field study showed that students interacting with a robot that simultaneously demonstrated three types of personalization (nonverbal behavior, verbal behavior, and adaptive content progression) show increased learning gains and sustained involvement compared to students interacting with a non-personalized robot. While progress has been made in the constituent technologies of robotics tutors— from perception to selecting and producing behaviors that encourage learning — the integration and balancing of these technologies to promote prosocial behavior and consistent learning remains as one of the significant technical challenges.