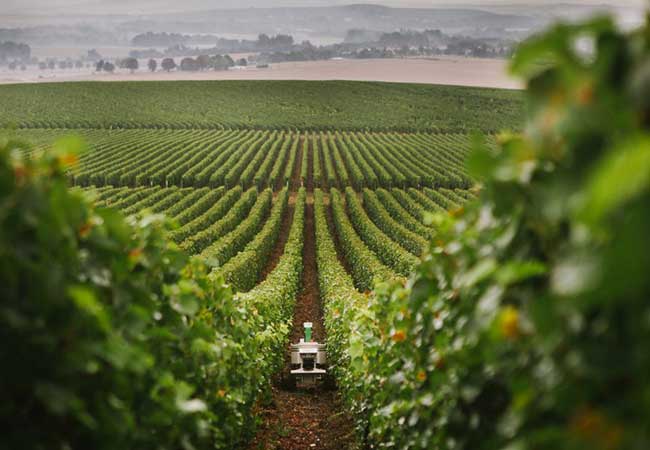 As inseparable parts of the modern farms and vineyards, agricultural robots are increasingly playing a key role in the daily life of the farmers and producers.

They are used in a number of use cases in agricultural lands, starting from crop monitoring using of aerial robots and and autonomous weed control, to heavy tasks like pruning, field scouting, seeding and even precise harvesting.

The Yamaha R-MAX is a Japanese unmanned helicopter developed by the Yamaha Motor Company. The gasoline-powered aircraft has a two-bladed rotor and is remote-controlled by a line-of-sight user. It was designed to help vintners with the tedious task of spraying their crops.

The RMAX is able to spray 6 acres of vineyard in the time it would take a tractor to complete one. This robocopter is capable of carrying a 25 kg payload and could also be used to keep crops from freezing during the cold months at the highest altitudes.

As of 2015, the R-MAX fleet has conducted over two million flight hours in agricultural roles and several other capacities, including aerial sensing, photography, academic research, and military applications.

Vision Robotics has developed an autonomous grapevine pruner that incorporates stereo vision technology and uses a robotic arm to thin plants, as well as an automated lettuce thinner. Two cameras set close together to view the canopy, much as human eyes would, take pictures of the canopy every 0.75 inches and allow the entire cordon to be modeled in 3D before any pruning takes place.

A computer translates the 3D vision into a set of actions based on pruning rules written into the software that determine where to make each cut. The cutting system trails the scanning portion of the system and robotic arms make cuts that are guided by lasers. The current system operates over-the-row and is towed by a small, self-steering tractor that only requires a human operator to move the pruner between rows.

A brainchild of Burgundy-based inventor Christophe Millot, Wall-Ye V.I.N. is an intelligent-vision based robot designed to tend vineyards. It takes on labor-intensive chores that no one else wants to take on such as pruning and de-suckering – removing unproductive young shoots – while testing soil, and keeping an eye on plant health.

VINBOT is an all-terrain autonomous mobile robot with a set of sensors capable of capturing and analysing vineyard images and 3D data by means of cloud computing applications, to determine the yield of vineyards and to share information with the winegrowers.

The robot provides data about water status, production, vegetable development or grape composition. VINBOT responds to a need to boost the quality of European wines by implementing precision viticulture (PV) to estimate the yield (amount of fruit per square metre of vine area: kg/m2). Winegrowers need to be able to estimate yield accurately to perform yearly canopy management techniques, and harvest vineyard areas sequentially, according to the optimal ripeness of the grape in each area, which improves wine quality.

TED is the first autonomous robot in the market for weeding in vineyards. Touted to be a highly precise weeding tool for vineyards, TED is an excellent alternative to chemical weedkillers, which are generally part of traditional wine growing practices.

It can efficiently maintain and weed vine rows with a high level of precision. The robot’s weight has been kept to a minimum (900 kg) to avoid compacting the soil. TED allows you to schedule weeding interventions when they suit you best. It allows you to program a weeding session for a different plot while it’s already weeding another plot. TED also helps you intervene longer when climate is subject to changes and can return to work sooner after a rainy episode. Naïo Technologies started marketing TED in 2017.

In 2015, we heard about a prototype vineyard-monitoring robot – VineRobot. Now, its successor has been unveiled in Portugal and it is called VineScout. The idea behind both robots is that they can autonomously move up and down the rows of a vineyard, checking the wellbeing and harvest-readiness of the grapes.

Managed by an improved artificial intelligence system, VineScout utilizes input from a 3D stereoscopic machine vision system, LiDAR (light detection and ranging) and ultrasound sensors to follow the rows without running into anything, and to turn around and move over when changing from one row to another. Additionally, unlike VineRobot, it can operate day or night, gathering over 3,000 pieces of data per hour.

As it moves along on its four knobby-tired wheels, VineScout uses an infrared sensor and a multispectral camera to respectively measure the temperature of plants’ leaves and the amount of water contained within the plants. This data is displayed in the form of a crop map that lets growers know if the plants are getting enough water, along with their current level of maturity and robustness.

Other upgrades include a more compact and agile form factor, better protection against the outdoor environment, and lightweight interchangeable lithium batteries that are augmented by solar panels.

The CSIR, in collaboration with Stellenbosch University, has developed a cost-effective robotic platform to inspect and monitor horticultural crops on local farms. This precision-farming tool consists of an automated mobile platform fitted with sensors to monitor plant growth and to estimate grape yield. It has significant potential to improve the monitoring, production, harvesting and processing of produce.

Following the successful development of a prototype, field trials of this precision-farming tool were undertaken to monitor vineyards in collaboration with the Department of Viticulture and Oenology and the Institute for Wine Biotechnology at the Stellenbosch University.

The sensors of the robotic system have been configured to estimate grape yield and to monitor plant growth and canopy health. The data provided will help farmers in the early identification of anomalies and potential hazards, allowing them to mitigate factors that could potentially cost millions in yield loss.

The robot is able to navigate autonomously through the vineyard, using CSIR-developed data-sensor fusion techniques to combine the data from the different sensors. Using the CSIR-designed data-fusion algorithm, it is also able to perform path planning, obstacle avoidance and lane following.

Agrirobot is the robot for the automatic soil management and treatment of the vineyard (conventional, integrated and biological). It moves, recharges and recognizes the working area in an autonomous way.

SAVSAR is a semi-autonomous vineyard spraying robot. It has three operation modes: In the autonomous mode, it is programmed to micro-spray grapes which have been selected and targeted automatically through image recognition algorithms. In teleoperated mode, the robot is controlled through an appropriated-designed Human Robot Interface.

In mixed mode, SAVSAR works autonomously until it meets a situation in which human intervention is required, as decided either by the human operator or by the decision support system programmed in the SAVSAR. By taking advantage of the human perception skills and the robot’s accuracy and consistency, a combined human-robotic system can result in improved performance and create a simplified, flexible, and robust system.

French industrial start-up VitiBot has developed a solar-powered robot, Bakus, to maintain vineyards. Founded in 2016, Vitibot’s robot can perform all of the groundwork in vineyards, and is capable of working for up to 10 hours at a time. It is designed to weed vineyards on slopes of up to 45 degrees using eight cameras and operating both day and night on a two-hour charge.

VITIROVER is a solar-powered mower for vineyards. It can cover about a hectare per hundred hours. VITIROVER cuts grass and weeds to within 2-to-3 cm of vine bases, without damaging the vines.

It weighs around 10 kilos. Using GPS signals to find its way, the robot is programmed by a basic smartphone, can mow vine stocks up to 2 centimeters tall and remain on its own in the vineyard for weeks.

Rovitis is a very simple robot that is able to travel autonomously through vineyards and perform all of the tasks that a farmer on a tractor would typically be required to do. Rovitis 4.0 aims to realise the idea of a self-managed farm, based on autonomous vehicles that navigate the vineyard without the presence of the operator and know how to intervene in the field with respect to the real needs of plants.