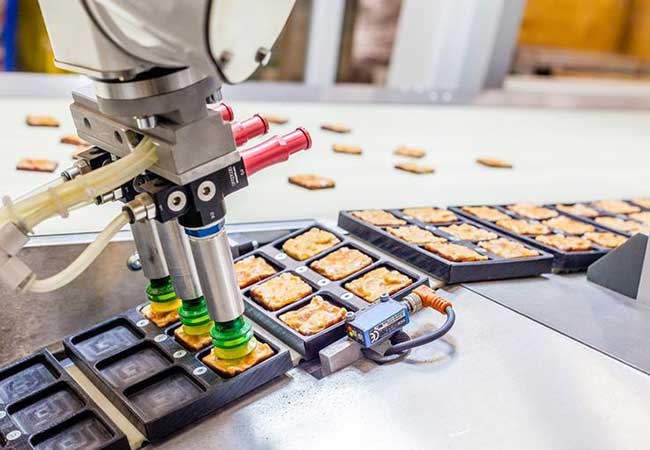 Every link in the food supply chain is affected by robotics. Robots introduce new ways in which food is processed and packaged to improve food safety and sanitation — and provide an opportunity for job delegations that are ergonomically difficult and harmful to human workers.

Overall, for a number of reasons, the food industry has been slightly slow to adopt robotics. But experts agree that food industry robots are changing — and companies risk falling behind if new technology is not deployed. With over 7.5 billion of the world’s population, the food demand continues to rise.

Food suppliers have to work more efficiently. Consumers are not only looking for better quality, sustainable food at their convenience. The key part of the solution is robotics and automation. Compared to other industries, robotics were relatively slow in the food manufacturing sector.

However, over the past few years, robotics have begun to enter almost every corner of the food supply chain, from the field to the kitchen. Here are six ways the industry is changing.

Farming is the beginning of the food journey. By 2022, the agricultural precision industry is expected to cost $7.87 billion. Robotics is an enormous part of it. The value of agricultural drones alone is forecast to be 3.9 billion dollars by the same year. Robotic applications include seedlings seedling, identification and sorting. Autonomous tractors, weeding robots and harvesting robots are also available.

To monitor and analyze crops, drones and autonomous ground vehicles are used. A recent Harvard research project aims to solve a major problem in global agriculture–the decrease in bee populations. The researchers propose to pollinate crops with a swarm of small drones. Robotics are also introduced in the dairy, poultry and beef farms for non-plant agriculture. Autonomous feeding and milking, egg collection and sorting and autonomous cleaning are the applications.

Autonomous food production can be the key to addressing rising demand for food. In the next five years, the value of the global food automation industry is expected to double to 2.5 billion dollars by 2022. The Asia-Pacific market is a big driver in this part of the world because of the popularity of ready-to-eat foods.

Food production can be divided into two stages:

Robotics applications tend to be better suited to secondary processing, as the food is more standardized by then. However, we are starting to see more primary processing robots.

For some time now, robots for food packaging have been incorporated into the food supply chain. However, the latest development is that it is possible to automate the entire packaging process.

Food packaging can be divided into three phases:

It seems likely that robotic packaging will continue to be one of the main applications in the food industry.

Although the interest in robot technology is partly driven by labor costs, more companies focus on food safety. Technavio forecasts that use of robot materials in the food industry will grow by 29% in 2019, driven mainly by clean and non-contaminating production areas. According to the CDC, an estimated 48 million Americans (1 in 6) are sick, 128,000 are hospitalized and three thousand die each year of foodborne disease.

Robots reduce the risk of contamination leading to foodborne diseases by limiting human contact with foodstuffs. Food also damages the reputation of a company while costing millions or more in sales and production loss. The Food Safety Modernization Act (FSMA) has further barred many of these packagers and processors with regard to their sanitary requirements. You’ve got these two major megatrends, work and FSMA. Companies are simultaneously trying to solve for both. It’s an area in which automation can lend a hand.

Recently, the delivery of robotic food has been getting a lot of news. Earlier this year, Dominos pizza announced that it would supply autonomous ground vehicles after their first (and extremely noisy) successful drone delivery at the end of last year.

Although autonomous food supply may look like “the latest fad,” this actually addresses an increasing trend in the market. Over the last few years, demand for restaurant quality, home-grown ready-to-eat food has grown enormously. It is debatable whether or not autonomous delivery will become widespread, but our taste for the food industry definitely changes.

Cooking is the final stage of the food supply chain. In the 2015 article Modern Cooking: Are robotic chefs Really Here?, we discussed cookery robots. The robotic kitchen of Moley and other robotic chefs were introduced to this. To date, the website of Moley still classifies the project as in development, but they say the robot is ready for marketing by the end of this year. A similar invention is the MIT Spyce robotic kitchen, which independently combines pre-cut ingredients to make them cook in heated rotating drums— a kind of cement mixer.

In April 2016, Spyce cooked food for university cantine students, but was not yet a commercial product. Cookery automation, however, does not necessarily mean on-demand cooking. For example, the APRIL robot aims to bring restaurant quality into mass foods. Traditional methods of mass manufacture reduce food quality partly because of large batch sizes. The inventors claim that food quality is better by using a KUKA robot to cook in smaller lots. Cookery and delivery robots are still in their infancy compared to other stages in the food supply chain. It is undeniable, however, that the robotics industry is changing.

Robots provide additional advantages in food production, such as:

Improving food quality – Robots work in harsh environments so that robots can handle this process sufficiently where food needs to be handled at freezing temperatures. Robots are also constructed to operate in different harsh environments, like extreme cold conditions. A harsh human environment or even the absence of oxygen for robots is not a problem.

Improving product consistency – The use of food robots reduces waste and increases overall yield because measures such as cutting are more consistent. Robots are estimated to help manufacturers benefit from an improvement of around 3 percent in situations where accurate cuts are the difference between contaminated meat and labeling products.

Adding functionality – Robots can make changes beyond an operator’s ability. Robots not only promote a sterilized environment but also take more accurate accounting during production, so a package that can be tainted back to its origins can be tracked.

Improving worker safety – Robots can use sharp, dangerous equipment to eliminate the need to involve workers and to make the work environment safer.

Improving productivity – When workers are in short supply, robots can be brought in to carry out repetitive, physically intensive work in a disagreeable environment in which workers will find it difficult to carry out. Robots work in repetitive environments where employees often get bored or tired.

More convenience – In order to meet their changing lifestyles, consumers are also looking for smaller, more comfortable packaging; and the producers are looking for more flexible means of packing mixed or multiple orders on one line.