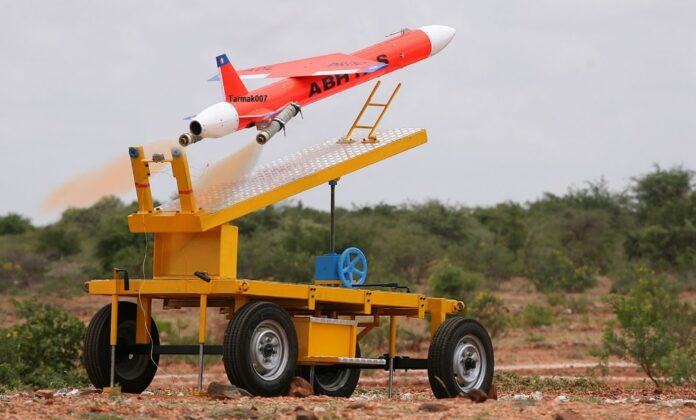 A drone, formally known as the unmanned aerial vehicle (UAV), is an aircraft without a human pilot. It is a major component of an unmanned aircraft system (UAS), equipped with a ground-based controller and a communication system.

These unmanned aerial vehicles’ main purposes would be surveillance, reconnaissance for intelligence gathering, and even carrying out combat missions behind enemy lines without endangering pilots or ground troops in treacherous mountainous terrains.

India’s Defence Research and Development Organization (DRDO) has developed its domestic UAV or UAS program, aiming to develop a domestic arsenal to replace and augment the existing fleet of unmanned vehicles. Here are a few examples:

DRDO Lakshya is a high subsonic target drone that is economical, reusable, and designed for covert aerial surveillance and acquisition. It carries two tow targets with tow lengths of 1.5 km, each with a radar, IR, or visual signature augmentation and a Miss Distance Indication Scoring System. It is powered by a gas turbine engine and launched either from land or ship by a solid propellant rocket motor. Both combat aircraft pilots and gun and missile crews stationed on land or in the water receive training using these two targets for weapon engagement. In 2000, 2001, and 2003, the Indian Air Force, Indian Navy, and Indian Army received the Lakshya. It is comparable to other vehicles in its class, like the BQM-74 Chukar from Northrop.

The primary purpose of Nishant, a multi-mission unmanned aerial vehicle with day/night capabilities, is to gather intelligence over hostile territory. It was created for the Indian Armed Forces by India’s ADE (Aeronautical Development Establishment), a division of DRDO. It is also utilized for training, target tracking & localization, artillery fire correction, damage assessment, battlefield surveillance, and reconnaissance.

A runway is not required for the 380 kg Nishant’s launch because it uses a mobile hydro-pneumatic launcher instead of the standard takeoff and landing with wheels. A sophisticated image processing system examines the transmitted images from the UAV. The ground control station is simple to use, and the aircraft is capable of autonomous flight. The UAV has a four-hour, thirty-minute endurance.

Aero Conical Parachute and Impact Attenuation System are used to recover this highly mobile, compact, and simple to deploy the system. The aircraft can fly in autonomous Way Point Navigation mode thanks to the onboard flight control and navigation system. The SEARCHER from IAI and NISHANT belong to the same class of vehicles.

A Medium-Altitude Long-Endurance (MALE) system, the Rustom is based on the American Predator UAV. The Rustom is made to be used for both combat and reconnaissance missions, much like the Predator. It is currently in prototype form and is anticipated to replace and enhance Indian Air Force Israeli Heron model UAVs. There are three different versions of Rustom: Rustom-I, Rustom-H, and Rustom-II.

The RUSTOM-1 Short Range Remotely Piloted Aircraft System (SR-RPAS) is an all-composite, 800 kg class SR-RPAS with intelligence, surveillance, reconnaissance, target acquisition, tracking, and image exploitation capabilities. It is a medium altitude long endurance vehicle and the first RPAS in India with a capability for traditional takeoff and landing. It has a get-to-home feature and autonomous flight mode. Rustom-1 RPAS has flown 65 times and has a 10-hour flight time, 200 km of range, and 20,000 ft of altitude. It is possible to upgrade SR-RPAS to have Synthetic Aperture Radar (SAR), Automatic Take-off & Landing (ATOL), and Store carrying capability. The Rustom-II can travel at a top speed of 150 kph and follow LOS.

EAGLE is a small, lightweight unmanned aerial vehicle (UAV) created in India by the DRDO with assistance from the National Aerospace Laboratories, the Aeronautical Development Establishment, and private companies. The National Security Guard and the military services will be its main users. The Imperial Eagle weighs 2.5 kg and can transport either a thermal or a daytime camera. Designed to be hand-launched, stowed in a soldier’s backpack, and recovered after a soft landing. The car’s ability to run on autopilot is its main benefit. A specific real-time operating system can be used to control its orientation (RTOS).

DRDO Netra is an Indian, lightweight, autonomous UAV for surveillance and reconnaissance missions. Netra was created by the DRDO Research and Development Establishment (R&DE) and Idea Forge, a business based in Mumbai. Netra can fly up to 2.5 km from its takeoff point after taking off from a small clearing. It can conduct surveillance for 30 minutes on a single battery charge in a 1.5 km Line of Sight (LOS) area at 300 m. It can carry a thermal camera for night operations and has a high-resolution camera with zoom to enable more thorough surveillance.