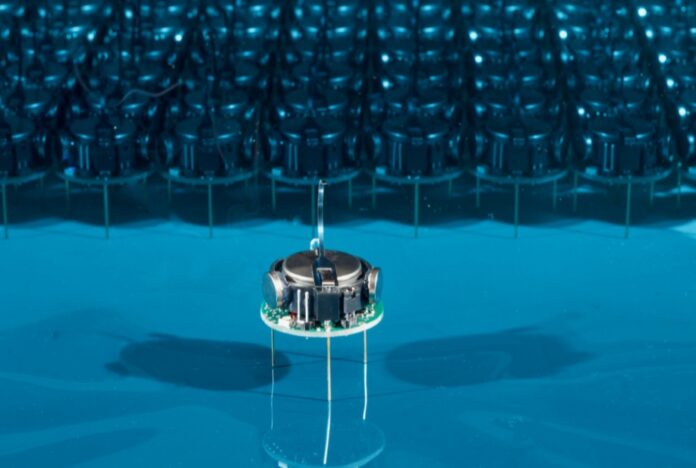 Swarm robotics (SR) is a relatively new research area inspired by biological swarms such as insect colonies (ants or bees), flocks of birds, and schools of fish. It consists of many small robots with simple control mechanisms capable of achieving complex collective behaviors on the swarm.

“Swarm” refers to “a large group of locally interacting individuals with common goals.” For instance, in an ant colony, a single ant has limited sensing capabilities and relies only on local information. Still, the colony could perform rather complex foraging, construction, and transportation tasks by working together.

The applications of swarm robotics may range from surveillance operations to mine disarming in hostile environments. This post will explore some of the potential applications of swarm robotics, such as levels such as aggregation, pattern formation, self-assembly and morphogenesis, object clustering, assembling and construction, collective search and exploration, coordinated motion, collective transportation, self-deployment, and foraging.

Aggregation is the process of spatially grouping all robots in a given environment. Aggregation gets the robots close enough together and can be used as a starting point for other tasks, such as limited-range communication. Aggregation is the first step in more complex tasks like collective transportation, which requires several robots to transport objects of interest.

Self-assembly involves robots physically connecting to form a specific structure. Self-assembly can increase the robots’ pulling power, provide stability while moving on rough terrains, form a connected structure to guide other robots, assemble structures to overcome holes that a single robot would fall into and combine the capabilities of heterogeneous robots.

Swarm-guided navigation involves robots being guided by other swarm members. Robots have no idea where they are or where the target is located. Instead, the swarm is led by instructions provided by previously deployed robots, which act as a communication relay. In a foraging task, for example, robots forming a chain from a pray to the nest and indicating directions to other robots, navigation via exchanging navigation messages, and flying robots navigating wheeled robots are all examples.

Mapping is the process of using a robot swarm to create a map of the environment. Localization, meanwhile, is the process of determining the location of robots or targets in their surroundings. Because it is necessary to know the positions of robots to obtain a map, mapping and localization are usually addressed together. Mapping serves two purposes. It’s used to map previously unknown (or even dangerous) environments, and it’s also used to help robots navigate by reducing the need for beacons and swarm-guided navigation techniques.

Self-deployment addresses the problem of deploying and dispersing robots in an environment by covering the entire space as possible. Also known as the area coverage task, self-deployment also indirectly solves the mapping problem. Potential applications include surveillance and security.

The coordinated motion task, also known as flocking, entails moving while maintaining formation. It is useful in group movement because maintaining formation prevents robot collisions and serves as a navigation mechanism. The goal of obstacle avoidance is to keep robots from colliding with each other and with the environment. Path planning is a technique for navigating robots through their surroundings while avoiding obstacles.

Robots must agree on a common decision to achieve consensus, such as which path to take or which target to pursue. Direct communication (e.g., voting) or indirect communication (e.g., using local sensor information) are used to reach an agreement (e.g., follow the nearest robot). Potential applications include scenarios where a collective decision is necessary to accomplish the task at hand.

In foraging tasks, robots are required to find prey and bring it to the nest. Also called prey retrieval or gathering task, foraging can be a subset of object clustering where robots cluster preys at the nest. The potential applications of foraging in the real world include search and rescue operations.

Robot soccer is a research platform for multi-agent and multi-robot algorithms. A team of robots must possess various skills and capabilities to be successful in robot soccer, which requires combining existing research and introducing novel algorithms. In terms of practical application, robot soccer is intriguing in collaborative play in a competitive setting. Robot football concepts could be applied to other areas, such as military defense operations.