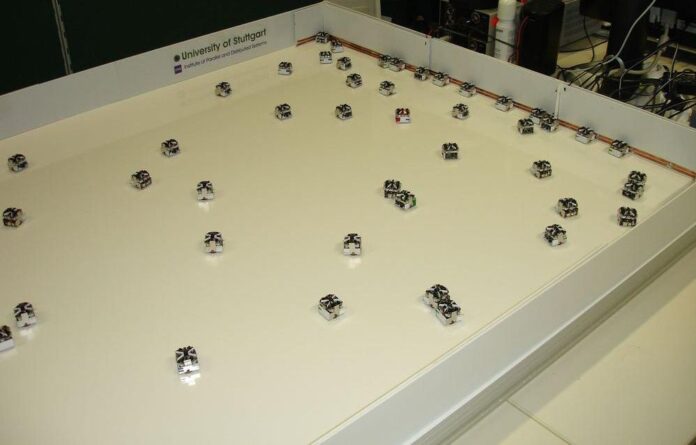 Swarm robotics is an emerging technology field of adapting natural swarms to robotics. It is a study of robots aimed to mimic natural swarms, like ants, birds, and fishes, to form a scalable, flexible, and robust robotic system capable of self-organization, autonomy, cooperation, and coordination amongst themselves.

These robots (aka swarm bots) operate without any central entity to control them, and the communication amongst the robots can either be direct (robot-to-robot) or indirect (robot-to-environment).

Swarm robots have a wide range of applications, from military missions to simple household tasks. They have been involved in tasks demanding miniaturization, distributed sensing tasks in micro-machinery and the human body, mining, agricultural foraging, post-disaster relief, and target searching, which are typically too dangerous for humans.

The key characteristics of swarm robots are as follows:

Grouping the robots have several advantages since the tasks are accomplished by swarms rather than single entities. The key advantages of swarm robotic systems are mentioned below:

The history of swarm robotics

The term ’swarm’ was first used in robotics by G. Beni and Fukuda in 1988. According to G. Beni, cellular robotics is composed of autonomous robots that operate in an n-dimensional cellular space without any central entity. Additionally, they coordinate and cooperate to accomplish common goals.

Fokuda used a swarm as a group of robots to work together like the cells of a human body. As a result, they could accomplish very complex goals. A year later, G. Beni and J. Wang introduced ‘swarm intelligence,’ claiming that cellular robotic systems could show intelligent behavior by coordinating their actions.

In 1993, C. Ronald Kube and Hong Zohng constructed a multi-robot system inspired by the collective behaviors of natural swarms. In the same year, Gregory Dudek defined swarm robotics based on their different features, including the size, communication range, communication topology, communication bandwidth, reorganization rate, abilities of the members, and swarm homo or heterogeneity.

Many studies and researches emulated swarming behaviors like foraging, flocking, sorting, stigmergy, or cooperation, which refers to the indirect communication amongst species like termites. Stigmergy was first explored in detail in two research papers: “From local actions to global tasks: Stigmergy and collective robotics” (1994) and “Stigmergy, self-organization, and sorting in collective robotics” (1999). The first study in 1994 illustrated several experiments where mobile robots collect randomly distributed objects in an environment via stigmergy. The second paper explored the feature of stigmergy and self-organization amongst robots, having the same capabilities.

However, in 2004, G. Beni made a fresh attempt to describe a swarm more precisely. According to him, robots in a swarm are simple, identical, and self-organizing. The system must be scalable, and only local communication is available among the swarm members. These properties are still considered the basics of defining and distinguishing swarm robotic systems from other robotic systems. According to G. Beni, the number of members in a swarm should be greater than 100 and much less than 1023.

There have been numerous other definitions for swarms. They all agree on the main idea, i.e., natural swarming and basic properties like local interactions and coordination, into real-life applications with swarms of robots. A more recent definition came in 2001. It defined a swarm as “a population of interacting individuals that optimizes a function or goal by collectively adapting to the local and/or global environment.” The coordination and cooperation in a swarm are achieved via very simple rules.