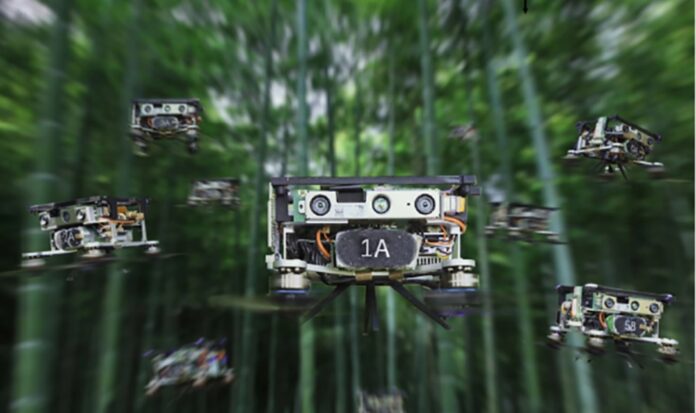 Swarm robotics is an emerging robotic field of adapting and mimicking the collective behavior of natural swarms like birds, honey bees, ants, fishes, and others, of forming robotic systems capable of self-organization, autonomy, cooperation, and coordination amongst themselves.

Natural swarms can coordinate their simple behaviors into complex behaviors, enabling them to carry out tasks that are impossible for lone individuals to complete. Swarm ants can construct bridges over wide spaces; termites can erect mounds up to 30 feet tall; fish congregate in shoals to ward off predators, and so forth.

Swarm robots are designed to interact together and have some common goals to accomplish, just like natural swarms work together to accomplish common tasks. They operate without any central entity to control them, and the communication among the robots can be direct (robot-to-robot) or indirect (robot-to-environment). Swarm robots have a wide range of application fields, from simple household tasks to military missions, which can be very difficult or impossible for humans to achieve.

A noted example of the agricultural application of swarm robots is SAGA, an experimental platform in precision farming that uses a swarm of unmanned aerial vehicles (UAVs) in a field to monitor the field and perform weeding. Equipped with onboard cameras, vision processing, radio communication systems, and protocols that will support safe swarm operations, the UAVs fly very close to the field to count the number of weeds in an area and detect areas where weed is sufficient amounts. UAVs can also deal with extra tasks like micro-spraying on some plants.

In a recent project called FIBERBOTS, robots can design fabricated structures while working as a swarm of fabricators. Pulling fiber and resin from a ground-based storage unit (a fiberglass spool), they work simultaneously to form tubular forms before wrapping them around their bodies. By wrapping themselves in tubes made of fiber, they construct the structures. The structure is constructed in several steps. The fiber and resin are retrieved from the ground-based storage by a winding arm. The nasal cavity is used to combine these materials before winding. The fiber is made harder with the aid of ultraviolet light in the following step.

The fiberbot uses its tiny motor and wheels to inched itself onto the hardened fiber after it has been heated up. Until the desired structure is built, this process is repeated. To change the appearance of the structure, alter the winding patterns. The robots communicate over a computer network and know one another’s current states, so they do not collide. The system uses a flocking-based design protocol for the structure formation to inform the robot trajectories rather than using commands to control the robots.

Cancer treatment is a very appealing area of research for swarm robotic systems. Even though the technology is advancing, there are treatments for almost all cancer types. However, there is still a serious issue with the potential side effects of these treatments. The attack on healthy cells is the main issue. Only a treatment that considers sick cells can address this issue.

Snake robots were developed by Howie Choset’s research team at Carnegie Mellon University in Pittsburgh, Pennsylvania, to fit through narrow passageways and tunnels inaccessible to people or other machines. These metal-bodied robots have a variety of abilities, including the ability to climb, swim, and crawl. They are about one meter long and five centimeters thick. They can maneuver easily through small spaces thanks to their 16 joints.

The snake robots are also outfitted with cameras and lights so that the control center can see clear video of every area. These machines assisted in the search for survivors after the 2017 earthquake that struck Mexico. However, the snake robots’ search during the operation showed no signs of any people. By incorporating new visualization tools and various sensors, the researchers hope to improve the system and design of their robots.

Endeavor Robotics developed several robots used by the US military for various tasks. The cobra robot is used for lifting heavy objects. It can lift to 150 kg of weight. The packbot is used for bomb disposal. AlphaDogs, robots that resemble dogs and are used to transport heavy loads for soldiers, were created by Boston Dynamics. It can walk up to 20 miles and carry 180 kg of weight. The intriguing aspect is that these robots can be directed in any direction without needing control. They follow their leader automatically, thanks to computer vision.

A design for an automated cleaning system made up of numerous miniature flying robots called “MAB” was presented by Colombian designer Adrian Perez Zapata. These flying robots can clean most home surfaces and are outfitted with cleaning supplies. They can transport and deposit dust and dirt flakes from the surface. Direct communication between the miniature robots is used to exchange environmental data. In 2013, this system idea took first place in the Electrolux Design Lab competition.

One of the interesting new fields for swarm robotic systems is Astronomy. Researchers are trying to find how robots can help them explore non-earth bodies like Mars, the sun, and the moon. The “robotic telescope” concept was introduced in the early 1980s. Back then, they were costly and difficult to develop due to resource limitations. The eSTAR project, a robotic technology for telescopic tasks, was developed by a research team at Liverpool John Mores University. It is a multi-agent system composed of a collection of diverse robotic telescopes.