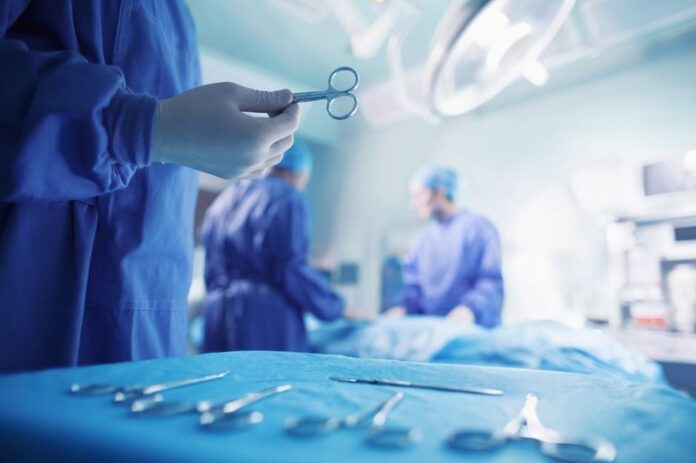 More than 4.83 million spinal operations are performed worldwide annually, with approximately 1.34 million operations taking place in the US alone.

These surgeries demand the highest precision within very little space, and they are extremely challenging for spine surgeons, as blood vessels and nerve roots found in close proximity create a potential hazard of bleeding, sensory and motor loss if damaged intraoperatively. Navigating by free-hand through long and narrow paths to the spine is extremely challenging, especially in patients with spinal and skeletal deformities, osteoporosis, and tumors.

To enhance surgeon performance, robot-assisted systems are used widely for spinal fusion and instrumentation procedures as they aid with intraoperative navigation, trajectory determination, and screw implantation. They improve accuracy and safety, reducing the complication rates associated with the implantation of pedicle screws, which help stabilize the spine and facilitate fusion. Robotic systems offer screw placement accuracy much superior to fluoroscopy-assisted free-hand screw placement.

These minimally invasive surgeries (MIS) reduce the incision sizes, post-operative infections, the length of patient hospital stays, and the duration of patient convalescence following surgery. They contribute to less pain, less blood loss, and less tissue trauma, allowing the patients to have better postoperative immune function and a quicker return to work.

Most robotic platforms have computer-assisted navigation (CAN) and real-time image guidance, along with continuous computation and scan integration that allows the surgeon to visualize a comprehensive three-dimensional picture of the patient. It enables the surgical team to view the operation remotely via telesurgery. Other benefits include 7 degrees of freedom and the elimination of higher amounts of harmful radiation to the patients and staff, hand tremors, surgeon fatigue, etc.

However, robotic-assisted spine surgery is not without its drawbacks. There is no reliable tactile feedback from current robots, and the use of these complex machines requires additional training and a larger operating staff. Besides, robotic equipment is large and cumbersome with high initial costs.

The SpineAssist was the first robot approved by the FDA for use in spinal surgery in the United States in 2004. Built by Mazor Robotics Ltd., it remains one of the most widely used robots for robotic-assisted spine surgery.

The SpineAssist is a shared-control robot, superior to conventional intraoperative CAN navigation. Traditional CAN requires the surgeon to execute pre-planned trajectories, often requiring extensive hand-eye coordination physically. The SpineAssist can position its arm automatically along a predetermined trajectory, reducing the amount of complex movement that the surgeon requires. The surgeon then conducts all drilling. The SpineAssist system provides 6 degrees of freedom of mobility for surgical instrumentation in addition to offering optimum positioning for screw insertion.

Third, after the frame is secured and the image registration fiducials are placed, six fluoroscopic images are captured. By using these images and its proprietary 3D marker, the robot verifies platform placement, reconstructs the operational field, and independently registers each vertebrae.

The robot is then attached to the mounting frame and aligns its arm automatically according to the trajectory planned. Then K-wires are inserted, and the correct placement is confirmed. Once trajectories have been verified, a cannulated dilator is placed through the arm, followed by a drill guide and guidewire. Eventually, the guide wires are used to mount the screws. The robot is then disassembled and removed from the patient.

The Renaissance is the second-generation spine robot from Mazor, replacing the SpineAssist. Though both robots are similar in relation to patient-mounted platforms and robotic arms, the Renaissance incorporates enhancements to software and hardware, such as improved image recognition systems, and the surgeon’s capacity to flatten the bone across screw entry points before drilling. This process prevents the skidding of the cannula on a sloped anatomy. Both the SpineAssist and the Renaissance have a higher reliability level, ranging from 85% to 100%.

The Mazor X is Mazor’s recent release. The Mazor X consists of a workstation and a robotic surgical arm similar to previous versions. Unlike previous models, the robotic arm has a linear optical camera that helps the robot to perform a volumetric analysis of the work environment to identify its position and provide intraoperative collision avoidance. For doing this, after inserting a reference pin in the spine of the patient, the camera executes an intraoperative 3D examination. Besides, the Mazor X allows independent registration of each vertebral body and thus has its accuracy. Another advantage of the robot is its serial rather than parallel robotic arm, which increases the system’s work capacity and leads to increased motion range and reduced reliance on surgical tools.

The FDA approved the ROSA SPINE by Zimmer Biomet Robotics in 2016. Similar to the Mazor X, to configure and direct pedicle entry points and trajectories, the freestanding ROSA utilizes a robotic arm and navigation camera–each installed on its floor-fixable portable bases. The stereoscopic camera is used for navigation and to correct some of the issues previously associated with the SpineAssist. Though the SpineAssist could not compensate for the patient’s movements, the Mazor X and ROSA use their cameras to monitor the patients’ movement and change the robot’s location in real-time.

ROSA first requires a CT scan for image acquisition. Later in an operating room, the O-arm device and ROSA are placed. The ROSA conducts automated image processing and generates a 3D reconstruction using a percutaneous reference pin. Then the surgeon merges the preoperative and intraoperative scans to plan the 3D trajectory.

The robotic arm is then aligned with the pre-planned trajectory. A guide-tube needle is placed in the back of the vertebral body by stitching a guidewire. The needle is removed after the wire is placed. Then the surgeon threads the cannulated dilator through the pedicle using the guidewire and inserts the screws into the vertebral bodies under real-time navigation guidance. Rods are placed, and the correct positioning is checked with a final CT scan. Finally, the robotic arm is removed, and the wounds are closed.

Intuitive Surgical created the da Vinci Surgical System, which was approved by the FDA in 2000. The da Vinci uses the telesurgical model by which the surgeon performs from a remote booth fitted with 3D vision monitors, thereby enabling the robot to act as an extension of the arm of the surgeon. Compared to traditional laparoscopy, the da Vinci provides superior vision and magnification. Other advantages include control grips, 7 degrees of freedom, tremor filtering, HD video, and improved ergonomics.

The da Vinci has a relatively larger configuration compared to other spinal surgery robots. The components consist of a booth for the surgeon sit and operate, an instrument and camera cart, multiple operating arms, and a vision cart to which lights are mounted. The dual set of cameras provides the surgeon with a 3D video. The da Vinci has been used for treatments like anterior lumbar interbody fusions (ALIF), thoracolumbar neurofibroma resection, paraspinal schwannoma resection, and transoral odontoidectomy.

The Excelsius GPS by Globus Medical, which was approved by the FDA in 2017, is very close to the Mazor and ROSA. Used in spinal procedures such as posterior screw and rod fastening, it provides intraoperative monitoring in real-time, automated patient motion adjustment, and direct placement of the screw through a robust external arm, eliminating the need for K-wires or clamps. Feedback is provided instantly through the monitor of the robot when the drill skives or the frame of reference moves.

Medical images are taken and uploaded into ExcelsiusGPS on the day of surgery. The surgeon uses these images to finalize the size and placement of the screws and to create an anatomy-based surgical plan. The surgical plan guides the robotic arm to a specific region of your spine. The surgeon uses this path to place screws accurately. The surgical implants and instruments are displayed continuously on the screen throughout the operation, allowing the surgeon to have live feedback during the procedure.