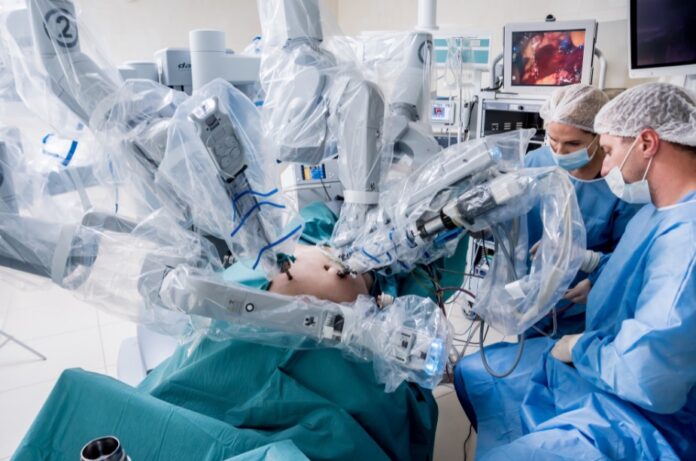 A surgical robot is a computer-controlled manipulator with artiﬁcial sensing reprogrammed to move and position tools to carry out surgical tasks. It assists the surgeon in carrying out repetitive motions automatically, relieving the surgeon of a tiring task. A surgical robot can position its tools accurately at a pre-deﬁned location or move them with micro motions or through a complex path.

These features and beneﬁts are equally applicable to computer-assisted surgery (CAS), which uses computer technology for surgical planning and guiding or performing surgical interventions. However, robots provide greater accuracy and precision than CAS. However, due to their ability to constrain the tools, robots are much superior to CAS.

In CAS, a surgeon holds the tools and could ignore all warnings to the contrary and cut into unsafe regions. On the other hand, the robots can be programmed to prevent motions into critical regions or only allow motions along a speciﬁed direction. Thus, the robots are considered safe and enhance the safety of the procedure compared with conventional surgery and CAS.

In surgery, the majority of computer-based systems are tracking systems. These may be used to track tools or parts of the anatomy, either using a sensor-based system or clamping the tool onto a manipulator arm whose joints are monitored for the position. The sensor-based systems usually use an array, either of light-emitting diodes (LEDs) or optical reﬂectors, attached to the tool. A group of cameras can track the position and orientation of the array in three-dimensional space. The tool and its three-dimensional coordinates can then be represented on a computer screen concerning the coordinates of the target anatomy, which is also represented.

The CAS systems, unlike robots, rely on the surgeon for motive power. However, they too are vulnerable to hardware and software errors in the data provided by the tracking systems for the tools and tissue. The surgeon must detect a problem and take corrective action or stop the procedure. In addition, just as for robotic surgery, most CAS systems use a pre-operative planning system. It allows the surgeon to take patient images, form them into three-dimensional models and display them on a computer with the various tool locations. The surgeon can then simulate the whole procedure and ensure that the proposed protocol is correct, removing worry and strain from the actual operation. The safety issues for pre-operative planners in both CAS and robots are broadly similar.

Compared with CAS systems, the potential beneﬁts available to a well-designed robotic surgery system are:

In short, robots have the very useful property of constraining and guiding surgical interventions in a way that is not possible with normal CAS systems. Robots can be autonomous and carry out repetitive actions tirelessly, as well as move through complex paths with considerable accuracy.

However, since they tend to involve additional components for the system, robots will inevitably make the equipment costlier and complex than CAS systems. This cost and complexity will be easier to justify in those procedures where the beneﬁts of robotic interventions provide a clear advantage over CAS.