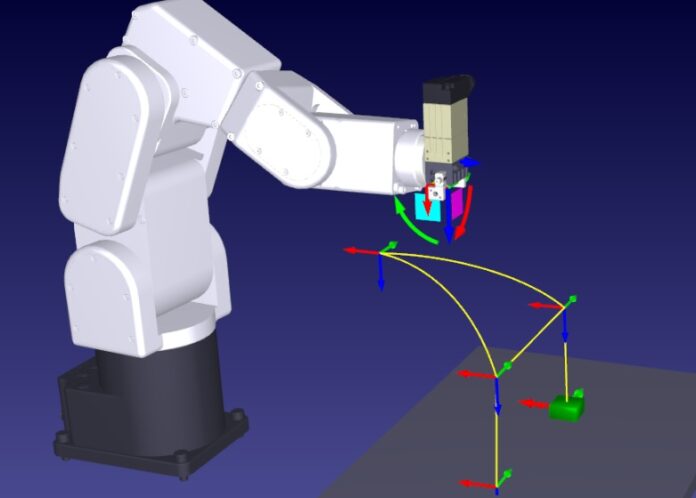 Establishing a physical relationship between the robot and the equipment or task is the first step in programming a robot. The robot must be manually controlled and physically taught the coordinate points within its working envelope.

It’s no longer enough to code instructions in a low-level programming language to program an industrial robot. As robotics technology advances, new programming methods to simplify things for end-users have emerged.

There are three common teaching or programming methods.

Lead-through is the simplest of all robot teaching methods. With the servo controls turned off, the operator can manually move the robot arm to its desired path. Significant points can be saved for later use when the robot travels along the path taught.

A smaller model of the robot communicating with the real one and its robot controller is another type of lead-through programming. This method is used if the robot does not have free movement mode and the servo controls can be turned off.

Although lead-through is a low-precision method, the operator may have editing options to improve precision once the robot has been taught its desired path. Lead-through programming promotes skilled workers who know how to do the job manually with high precision rather than technical skills and thus does not require workers to have any knowledge of computer programming.

The most popular method of robot programming, pendant teaching, involves using a hand-held control device that controls the robot’s positioning and programs it. The operator can record each motion by guiding the robot step by step through each process in operation using the pendant controller.

A joystick, keypads, and a display are commonly used in modern pendants. The joystick controls the robot’s positioning and workpiece orientation. Predefined functions and data can be entered using the keypad. Soft control keys and operator messages are displayed on the display screen.

The teach pendant can handle more difficult tasks like pick-and-place, machine loading/unloading, and spot welding, but it does so at the cost of a basic understanding of computer programming and devices.

Offline programming refers to a method in which the robot’s operations are developed on a computer rather than on the robot system. You can program robots in a simulated environment using offline programming. It is most often used in robotics research to ensure that advanced control algorithms operate correctly before moving them onto a real robot.

It’s also used in the industry to cut downtime and boost productivity. Because robots are more likely to be reconfigured multiple times in SMEs than in mass production environments, it can be a particularly useful method.

Because programming takes place offline, it has a minimal impact on production. The robot can be programmed using a virtual mockup and task with offline programming. If the simulation software is intuitive, this can be a quick way to test an idea before moving it to the robot.