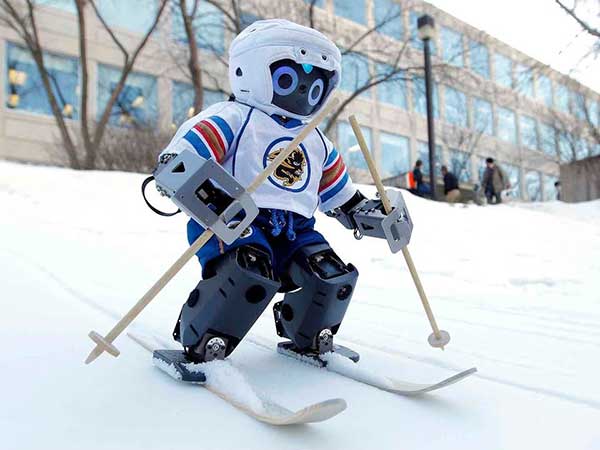 The kind of robots that people encounter most frequently are the field robots that work in tedious, boring, and hazardous environments such as assembly lines, mines, agriculture fields, manufacturing, underwater, construction site, etc. But what about a robot that can excel in sports that pushes the boundary in artificial intelligence?

It turns out that it was the dream and the stated objective of a cadre of robotics experts convened in Nagoya, Japan, at the world’s first Robotics Cup during the International Joint Conference on Artificial Intelligence in 1997. By 2050, they hope to create a team of fully autonomous humanoid robot soccer players that can win the World Cup team, complying with the official rules of FIFA.

It might seem like a fiction than a practical goal. But, the idea has been floating around the robotics community since Professor Alan Mackworth of the University of British Columbia first argued in this paper “On Seeing Robots” that building a robotic soccer team might solve several problems in modern robotics.

Mackworth and his team later went on to launch the Dynamo Project, the world’s first attempt to create an autonomous robotic soccer team. They carried out a series of experiments from 1992 through 1994 at the UBC Laboratory for Computational Intelligence, using small scale radio-controlled trucks and cars to play robot soccer, and served as precursors to the RoboCup robot soccer competitions that started in 1997.

In RoboCup, the competing teams — usually from universities — create teams of autonomous and self-propelled to play soccer against each other. The creators cannot use remote controls to operate the robots. The contest includes several categories, including humanoid, four-legged, small, and middle-sized, and it has taken place in many different countries, including Japan and Germany. Let’s now see the top 10 greatest robots in sport.

As we have already seen in the introduction, RoboCup is an international research initiative since 1997. The competition aims, according to its website, to “promote robotics and AI research” using one of the world’s most popular sports. But not all robot football matches. RoboCup has expanded to include rescue robots, home application robots, and unmanned aircraft operation. Even robotic referees.

CUE is a basketball-playing robot built by Toyota engineers as a side project. The robot is 190 cm taller than the average NBA player. However, CUE can shoot 100% accuracy free throws –a figure that tops the current 77% NBA average. The robot itself is pretty basic. It can not pick up balls alone or move alone. Squat, aim, and throw, though. CUE practiced shooting 200,000 times, according to Japanese news organization Asahi Shimbun, using AI to hone its skills.

Winter Olympics are not for talented athletes. It turns out robots can also participate. At the Welli Hilli ski resort in early 2018, an hour away from the main action in Pyeongchang, robots took part in what is believed to be the world’s first robot skiing competition. South Korean government organized the event to promote its robotic advances. It saw eight teams competing for $10,000.

There were some basic rules: robots had to be humanoid (i.e. standing on two legs with joints resembling elbows and knees), measuring at least 50 cm tall, and using regular poles and skis. Embedded camera sensors were used to help each humanoid navigate the slopes, avoiding the flagpoles lining the course.

One thing is a robot that can walk, but how about one that can backflips? In this video, you can see the latest Atlas humanoid robot from Boston Dynamics that can not only hop, jump and spin, but also complete backflip before sticking the landing like a gymnast. Atlas can perform jumps, mid-air 180-degree direction changes, and back-flips at different heights with the takeoff and landing platforms.

FORPHEUS is equipped with two ball movement vision sensors and one motion sensor monitoring the opponent’s movement. A controller analyzes the ball’s speed at a thousand times per second, allowing to predict where it will land and react accordingly. The AI component can also determine where FORPHEUS’ return will land with an accuracy of 5 centimeters, and this is projected on a screen so that human “students” can prepare and improve their game.

Robot Combat League (RCL) is a Syfy network television show about robot competitions. Teams use exosuits to control robots in the show. Each weekly show features8-foot, 1000-pound[1] humanoid robots controlled by human competitors, one robo-jockey and one robo-tech per team. The series features twelve teams from different backgrounds. Each team has a robot they control using an exo-suit that directs their movements. Each fight goes three rounds, and the winning team moves forward.[2] Twelve total robots. The robots range from an axis-headed, laser-eyed warrior to a plexiglass robot and roll cage. The robots and suits were created by robotics expert Mark Setrakian.

Sumo wrestling has been popular in Japan for centuries, and now robots enter the mix. There were numerous tournaments and competitions. Sumo robots are divided into size classes and further divided into remote-controlled, autonomous robots. These robots use sensors to find their opponent and try to stay within circle confines. They use every outflanking, pushing and scooping tactic. The robots are pretty small, but they’re super fast and ultra aggressive.

Robot jockey is a robot used in camel racing to replace human jockeys. Developed since 2004, robotic jockeys are slowly phasing out the use of human jockeys in Saudi Arabia, Bahrain, United Arab Emirates, and Qatar for camel racing. The first successful official race with robotic jockeys was in Qatar in 2005. The robots are remote-controlled by operators driven alongside the SUV track.