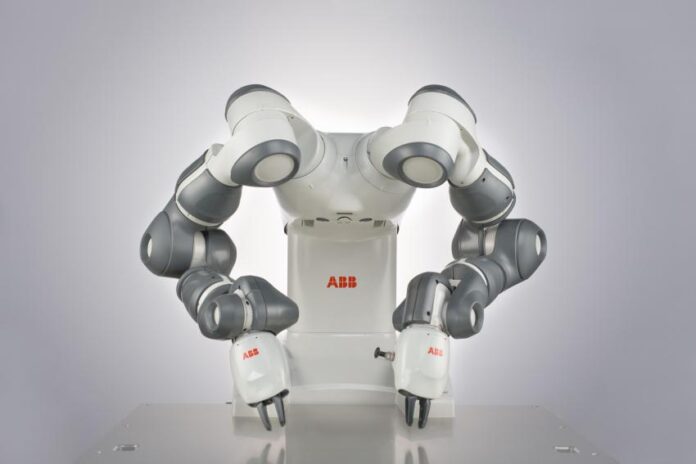 Traditionally, robots and humans work in separate environments, not letting both do the same task at the same time. But now new standards and devices make it easier and legally possible for robots to work with humans. These robots are known as collaborative robots or cobots.

Collaborative robots are built with safety features and mechanical compliance (or force-feedback detection) to stop the robot when it makes contact with a person or object. It allows cobots to operate in the same workspace as humans safely.

Since a cobot cannot hurt people working nearby, extensive safeguarding and safety control interlocks are no longer required, resulting in several notable advantages such as:

In this article, we will look at some of the top collaborative robot companies to watch out in 2021.

ABB is a Switzerland-based robot maker who builds the world’s first collaborative robot, YuMi. YuMi is a two-arm robot that uses a wide variety of tools: cameras, a two-finger parallel gripper, and a suction cup to assemble small electronic devices and detect flaws that a human eye fails to identify.

YuMi is designed to automate tasks within the consumer electronics industry primarily, and it leverages IBM Watson and its computing capabilities, specifically its Cognitive Visual Inspection tools (image recognition capabilities). The robot is easy to program and has a very niche market.

Epson Robots is a world leader in PC controlled precision factory automation, with a product line of Cartesian, SCARA, and 6-Axis robots based on a common PC based platform. Its new entry-level VT6L All-in-One 6-Axis robot comes with a built-in controller for simple pick-and-place operations.

Fanuc is a robotic automation company that ventured into a collaborative robotics business in 2015 with the release of a 6-axis collaborative robot, CR-35iA. This 35-kg payload, force-limited robot was designed to work alongside humans without the need for a cage or fencing, capable of handling repetitive tasks or tasks too difficult or dangerous for humans. If it ever runs into a human worker, CR-35iA can come to a gentle halt. As an added layer of protection and safety, Fanuc has a green foam material coated on the robot. According to the company, the robot maintains contact for less than 150 N.

Traditionally, Festo is a pneumatic and electromechanical system manufacturer, but in the last ten years, it has been active in developing products in collaborative robotics space. Festo has developed three cobots: BionicCobot, BionicMotionRobot, and OctopusGripper. BionicCobot, a lightweight pneumatic robot, was inspired by the human arm, while BionicMotionRobot took inspiration by the movement of an elephant’s trunk. OctopusGripper is a bionic gripper based on the octopus’s tentacles.

An e-commerce fulfillment robotics company, Locus Robotics, focuses on improving labor productivity in warehouses through the use of cobots. The company recently unveiled its Locus Robotics Advanced Navigation (LRAN) software for coordinating multiple robots in a factory environment, where deploying multiple robots and coordinating their movements without creating traffic jams or safety hazards pause a big challenge. With its cloud-distributed LRAN software, Locus aims to optimize their robots’ navigation accuracy and performance.

Omron is a global automation technology company that delivers mobile robotics solutions, enabling robots to navigate around a factory as quickly as a human worker. Its Lynx robot can easily move materials in environments such as warehouses, factory floors, and hospitals, where humans find it difficult to move things. By using machine learning capabilities, this self-navigating robot builds maps of its work area and determines the best routes from point A to B. A human worker can also train the robot by simply walking it through a layout.

Rethink Robotics is one of the most well-known names in collaborative robotics. Its flagship products are Baxter, a friendly-looking robot targeted at automating monotonous or dangerous shop floor tasks, and Sawyer. Both robots use force-sensing to maintain safety while working alongside workers.

Both depend on the company’s proprietary software Intera for training. A worker simply needs to walk Baxter or Sawyer through a task, and the robots will be able to learn to repeat the task in real-time. Rethink is currently expanding its product offerings to robotic grippers with its new ClickSmart toolkit, which uses smart sensing to adjust to a variety of delicate or broad handling tasks.

Instead of creating a line of robots, Robotiq creates cobotics tools for robots to use. Their most famous tool is UR used by the Universal Robots. Robotiq also makes a series of add-ons that make it easy to augment the robot’s arm functionality, just by simply plugging the products in.

The company has four different flagship products: a robotic hand with three fingers, adaptive grippers with two fingers, a sensor with force touch that gives touch-sense capabilities to the robots, and a camera vision system for that needed object recognition. Robotiq also offers custom program templates for many typical applications for companies looking for faster implementation of cobots.

Universal Robots builds a series of collaborative robot arms, namely UR3, UR5, and UR10, for an array of applications including pick and place, quality inspection, injection molding, assembly, and packaging and palletizing. Like Rethink’s Baxter and Sawyer, the UR series can be trained by manually moving the arm to specific waypoints.

The UR series have been deployed worldwide by companies like Nissan and Yokohama, where they offload tasks to the robots. It allows more time for the training of new workers and avoids bringing in extra relief workers to handle repetitive and time-consuming tasks. Universal Robots uses its own UR series robots to manufacture its robots.

Vecna is an end-to-end product solutions company with a focus on robotics automation for applications in manufacturing, warehousing, and omnichannel order fulfillment. It doesn’t focus on any robot platform but takes an AI-based overarching approach to optimize workflows. Its robots feature proprietary computer vision technology for object recognition as well as navigation. The sensor-fusion technology of the robots employs simultaneous localization and mapping (SLAM), the same technology behind many autonomous automobiles, to understand and navigate its workspace in three dimensions.