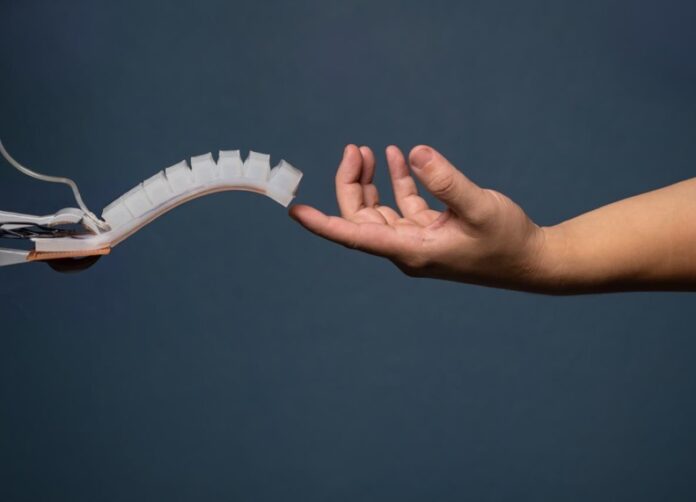 Soft robots are often inspired by biological systems which consist of soft materials or are actuated by electrically activated materials. They typically resemble the animals that inspired their creation, constrained by the same structural considerations.

On the other hand, soft materials do not lend themselves to the construction of giraffe-like robots! The majority of soft robots are terrestrial wormlike devices, though some have been designed to operate underwater or as manipulator arms similar to those used by octopuses.

There are several advantages of soft robots compared to conventional robots, such as safe human-machine interaction, adaptability to wearable devices, a simple gripping system, etc.

It can interact with the human environment more safely than a conventional rigid robot system by reducing the risk of injury to itself and its surroundings from a collision. It allows its application to be extended to wearable devices and medical usage. In addition, soft robots have inherent beneﬁts over conventional rigid robot systems in gripping motion having simpler structure and control algorithm.

Due to their unique features and advantages, soft robots have a considerable range of applications. Recent examples of soft robots illustrate a variety of actuation technologies and body designs. Their mode of actuation distinguishes two major groups of soft devices. 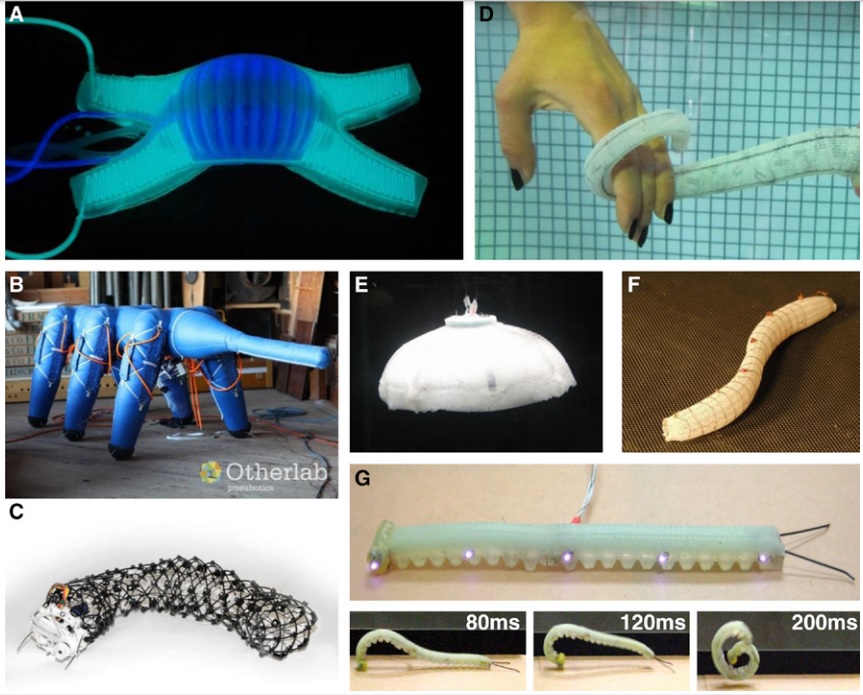 The first group typically uses traditional hard-material motors and pumps that transfer power to the soft-bodied robot using cables or pressurized air and fluid. Some designs used air-powered bladders wrapped in a braid to force the expanding bladder to shorten longitudinally. Because they are compliant linear actuators, these ‘Mckibben’ actuators are often referred to as artificial muscles. They’re available for purchase and are used to power robots with rigid skeletons. This method has recently evolved to include inflatable rubber compartments that are carefully designed to expand in predetermined directions (Figure 1A). These devices can be made to crawl with various gaits or generate complex movements for grasping and manipulating objects by connecting these compartments and controlling the inflation timing.

Actuators for large inflatable walking machines are made using a similar principle (Figure 1B). An octopus-inspired manipulator arm (Figure 1D) and a clever tensegrity structure that crawls by converting transverse rotary motion into a peristaltic-like wiggle are two examples of cable-actuated soft robots (Figure 1C).

The second group of soft robots uses active materials such as electroactive polymers and shape memory alloys. These machines do not require separate motors and can move soft, self-contained. However, poor actuator efficiency or force production and the need to transport relatively stiff power supplies such as batteries are currently limiting them. Designs vary from small structures composed entirely of active gels to aquatic jellyfish designs with embedded shape memory alloy ribs (Figure 1E), terrestrial caterpillars, and wormlike crawling machines. The Meshworm robot (Figure 1F) uses shape memory alloy mediated contraction in successive body segments to cause a radial expansion in adjacent segments, thereby changing the ground contact position and pushing the robot forward. The Meshworm can maximize its speed or efficiency by using sensors to detect the length of each segment.

Instead of a worm, the GoQBot (Figure 1G) is based on a caterpillar. Caterpillars, unlike worms, are not uniformly pressurized and do not control their muscles in antagonistic groups, so this is conceptually important. They appear to use the so-called “environmental skeleton” strategy to exert compressive forces on the substrate by developing and releasing tension along the body. GoQBot has a monolithic silicon polymer body with very small shape memory alloy coils running along the underside that act as actuators. It can imitate the crawling of a caterpillar or the movement of an inchworm. It can also turn into a wheel with its highly deformable-body, which, if done quickly enough, releases stored elastic energy to produce ballistic rolling locomotion.

These soft robots are still in their infancy, but new devices are being designed and built at a breakneck pace. A new generation of caterpillar-like robots is currently being fabricated using a multi-material three-dimensional printer capable of assembling completely new designs daily. Future robots are expected to combine many of these technologies to increase their versatility and usefulness — for example, the octopus arm manipulator uses both cables and shapes memory alloy actuators.

Soft robotics is a new field that redefines some design, control, and fabrication methods that may differ significantly from traditional methods. To address these novel requests, soft robotics researchers are looking to Nature’s solutions, which have successfully evolved animals with soft bodies, compliant joints, deformable shells, and other strategies that robotics researchers could harvest.