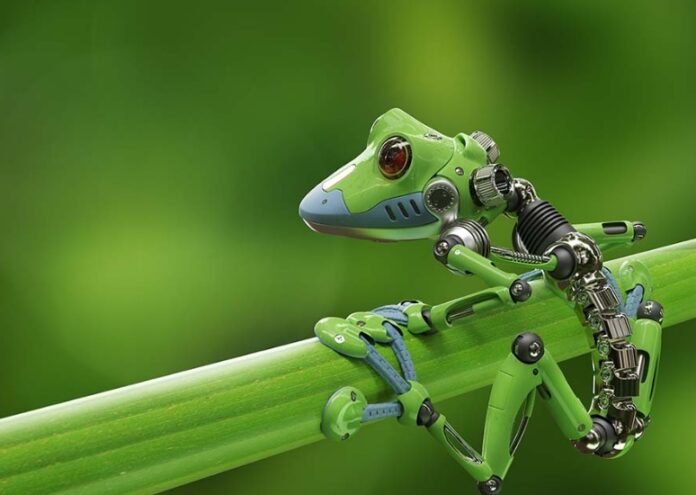 The interest in soft robots is increasing significantly. The growing interest comes from the new possibilities to cope with problems that cannot be addressed by conventional industrial robots with rigid bodies.

Industrial robots are fast, precise, and intelligent systems based on their rigid-body mechanisms, ensuring high throughput in manufactured goods production. On the other hand, soft robots are ﬂexible and bio-inspired systems with serial elastic actuators that mimic animal or human capabilities, allowing them to operate more safely in a human environment.

Soft robots are a step further in our attempt to oﬀer safety and, simultaneously, approach evolved living systems’ incredible capabilities in complex tasks. Soft robots are intelligent systems built from materials with mechanical properties similar to living tissues. They are designed in a very innovative way rather than artiﬁcially assembled by serial or parallel arrangements of elementary blocks, as was the case for rigid-body robots.

This post will discuss some of the common soft actuation approaches used in manufacturing components and systems that constitute soft robots’ structures.

An easy way to create a homogeneous load on a deformable piece of material is to raise the applied pressure using some ﬂuidic medium. This concept is at the core of most soft robotic actuators and their various implementations.

The simplest soft ﬂuidic actuator designs involve bladders with a speciﬁc spatial architecture that can quickly be inﬂated with compressed air, generating the impulse needed for mechanical action or internal combustion.

Thin anisotropic ﬁlms are used to build bladders, and their transverse ﬂexibility and plane stiﬀness can be used to favor deformation in speciﬁc directions. Besides, pleats are added to the design, allowing the motion to follow prescribed trajectories. Limiting the radial expansion of the tubular bladder using stiﬀer materials makes it possible to build actuators to generate large linear extensions. This sort of “mechanical programming” is possible with different materials with diﬀerent stiﬀness values.

Using pressurized ﬂuid, it is possible to obtain contraction instead of expansion. This method, used in pneumatic artiﬁcial muscles (PAM) such as McKibben muscles, is inspired by the idea of mimicking the biological muscles that contract when stimulated. A PAM is fundamentally composed of an inflatable elastic tube surrounded by a braided mesh. Depending on the braided mesh’s weave pattern, the actuator can be designed to contract or extend under input pressure. Typically, these actuators are operated with driving pressures between 50 to 100 psi.

Another approach is to use a vacuum to collapse a buckling structure or contract a compressible skeleton using a flexible sheet’s mechanical tension of a ﬂexible sheet on a more rigid structural element. The vacuum‐powered soft pneumatic actuators promise technology for a wide range of new applications, including programmable locomotion, artificial muscles, and flexible grippers, due to their flexible deformation, clean power supply, safe interaction with users, and high reliability.

Another widely used actuator is the family of soft ﬂuidic bending actuators, consisting of elastomeric matrices with flexible embedded materials (e.g., cloth, paper, fiber, particles). They feature a general beam-shaped geometry with an inﬂatable chamber along their longitudinal axis. Their bending motion results from an extensibility change of two opposing sides of the beam. These actuators may exhibit a large range of motion in one or more directions depending on the number of internal chambers, topology, and actuation methods. Simple variations in the wall thickness lead to varying degrees of deformations under the same pressure in single-material structures, creating the desired bending motion. These actuators are lightweight, affordable, easily customized to a given application, and rapidly fabricated in a multi-step molding process. They can achieve combinations of contraction, extension, bending, and twisting with simple control inputs such as pressurized fluid.

Shape memory alloys are materials capable of “remembering” their original shape and returning to it when heated, even though apparent residual deformation is introduced in a certain temperature range. The original shape is set by heat treatment. The SMA crystallographic structure changes between two phases: the high temperature (austenite) and the low temperature (martensite). SMAs are useful for such things as actuators that “change” shape, stiffness, position, natural frequency, and other mechanical characteristics in response to temperature. The SMA actuators are made in wire, spring, or ribbon shape. SMA can also act as tendon-like actuators, embedded in a rigid structure or acting as constrictive muscles for biomimetic soft tentacles.

Electroactive polymers (EAPs) are flexible, elastic polymers (elastomers) that change size or shape when stimulated by an electric field. They bend, contract, or expand when a voltage is applied. Electroactive polymer actuators can mimic the motion of biological muscles. They’ve received considerable attention as soft biomimetic actuators in bioengineering applications like artificial muscles and active catheters.

Ionic electroactive polymers (IEAPs) are intelligent soft materials that exhibit large displacement under electric excitation, based on inner ion or solvent transport. Due to their unique advantages such as low driving voltage, flexibility, large bending displacement, and aquatic-environment adaptability, IEAPs have been documented as very promising actuators for soft robot applications.