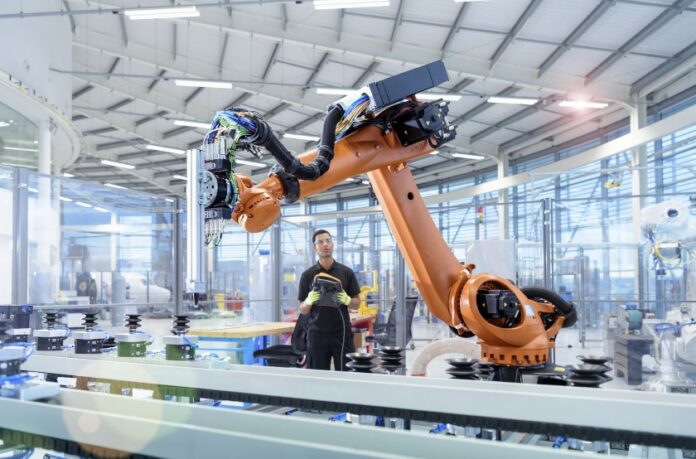 How do engineers pick the right robotic arm to go into sprawling automated manufacturing facilities? Do all robotic arms look like claw grippers? What are the different types of robotic arms?

These are all great questions to ask when choosing a robotic arm. As automation explodes in popularity, more incredible robots are available today than ever. Finding the right one is all about understanding the main characteristics of robotic arms and how the various types differ.

What to Consider When Choosing a Robotic Arm

There are thousands of unique robotic arms on the market today, most of which fall into a half dozen main categories. Choosing the right robotic arm with so many options can be a challenge. There are a few key considerations that can simplify the process, though.

The first thing to consider when choosing a robotic arm is the robot’s goal. What does it need to do? What task will it perform? This objective will determine the technical needs. Some robotic arms aren’t as flexible or precise as others, so a clear understanding of exactly what the robot needs to do is crucial to choosing the right type.

With this goal in mind, the next step is estimating how many axes of motion the robotic arm needs. Sometimes called “degrees of freedom,” a robot’s axes of motion determine its flexibility and maneuverability. It may help to imagine axes of motion in a cartesian plane. A robot with two axes of motion can move along the x and y-axis but not the z-axis. Robots can have anywhere from one axis of motion to seven or more.

Part of determining what end effector the robotic arm needs is evaluating how dexterous the robot needs to be. What does it need to pick up, move or interact with? How heavy is the object or objects the end effector has to move? Are these delicate in any way? Keep notes on the needs of the components the robot has to interact with — these will help narrow down the best type of robotic arm.

Finally, consider if there are any programming restrictions. Some types or specific models of robotic arms require more programming than others. For example, it is generally easier to program a robot with only two axes of motion than one with six. Similarly, collaborative robots are often designed to be easier to program than other types. If those most frequently using the robot have limited programming capabilities, it might be best to go with a collaborative robot or one with a simple movement.

6 Main Types of Robotic Arms and Their Applications

Anyone in the market for a robotic arm today has thousands of models to choose from. The easiest way to find the right one is to start by selecting a specific type of robotic arm best suited for the task at hand. There are six main types today.

Articulated robotic arms are the most common type. The six-axis articulated arm is particularly popular, with many applications in industrial settings. They can readily be found with a variety of axes of motion, as well.

The main drawback of articulated arms is positioning accuracy, which diminishes further from the robot’s main rotational joint. Despite this, these robotic arms can still be accurate down to the millimeter, which is plenty precise for many applications. The number of joints impacts positioning accuracy, as well, since more axes of motion allow for more freedom of movement.

One well-known application for articulated robotic arms is manufacturing. These robots are commonly found in automotive manufacturing facilities, autonomously constructing vehicles on an assembly line. Articulated robots are often a great way to go for applications that don’t match any other type of robotic arm. Due to the popularity of articulated arms, there will always be plenty of end effectors to choose from and technical help from the wider robotics community.

Parallel link robotic arms feature a unique design with three or more arms connected to one end effector. The shape is similar to an upside-down pyramid, with joints at the corners and an end effector at the peak.

A cartesian robotic arm moves along exactly three axes of motion — the x, y, and z-axes of the Cartesian coordinate system. These are popular in manufacturing, where their simple linear motion delivers consistent, reliable performance.

Also known as a linear or gantry robot, cartesian robotic arms typically mount in a frame-like structure. Two side rails control the x-axis motion. One rail bridging the side rails controls y-axis motion. Finally, a third smaller rail mounted on the y-axis controls z-axis movement. No complex joins are needed, just gliding along in straight lines.

A simple example of a good task for a cartesian robot is moving food items into packaging. The robot glides along the x and y-axis to where the food items are piled. It flows along the z-axis to pick up an item, extracts it from the others, and then glides back to where the containers move along an adjacent conveyor belt. Using the z-axis again, the robot lowers the product into its packaging.

Cylindrical robot arms swivel to glide around in circular motions, similar to how an office chair can swivel around on its base. These robots typically have circular motion around the z-axis and horizontal and vertical motion. They move cylindrically at their rotational base, while the attached arm can extend in and out horizontally and move vertically along the z-axis.

Cylindrical robots move similarly to cartesian robots but do so in a more space-efficient way. They don’t need a gantry to mount on and sit more like an articulated robot. This allows them to move above and around objects more flexibly than a cartesian robot could achieve.

As a result, cylindrical robots are popular in manufacturing settings where space is limited. For example, they might operate machinery, perform welding or apply coatings and finishings. Welding is likely to be an increasingly popular application for cylindrical robots. An estimated 15.6% of global robotics spending — valued at over $240 billion — is attributed to welding robots alone.

Selected Compliance Articulated Robot Arms — or SCARA robots — are similar to cylindrical robots but feature multiple cylindrical joints rather than just one. While a cylindrical robot only has cylindrical movement at its rotational base, a SCARA robotic arm can move cylindrically along all three axes — x, y and z. They are often used in place of articulated robots, offering simpler motion but greater versatility in a smaller footprint.

While SCARA robots make up only 13% of industrial robots in use today, they quickly become a favorable choice in industrial sectors. SCARA robots are most commonly found in biomedical applications, such as filling or moving vials. They are also used in other industries for palletizing, dispensing, or assembly line applications like soldering circuit boards.

Collaborative robots are the final main type of robotic arm. These robots can be almost any of the other types, but with one key difference — they are specifically designed to work alongside humans. Safety hazards are one of the main challenges of bringing robots into the workplace because typical industrial robots can’t tell when an employee is passing by. They don’t have the senses to tell them to stop before they hit someone on accident.

Collaborative robotic arms are next-generation robots that use sensors and even artificial intelligence to mimic human senses and behavior. For example, a collaborative robotic arm might have proximity sensors that detect when a worker is standing nearby, preventing the arm from accidentally swinging around and hitting them.

These robots are also easier to program and maintain. They use smart sensors to detect when parts are misaligned or when maintenance is needed. This makes cobots safer to work around, as well, since the robot will know to stop operating if it malfunctions. In contrast, a conventional robot may keep trying to function despite being damaged.

Cobots aren’t ideal for every application as they typically cost more than conventional robotic arms. However, they are the perfect choice for applications where a robot must add human employees, such as assembly line settings or partially automated manufacturing facilities.

Each of the six main robotic arms has advantages and disadvantages. Some are nimble, while others are easier to program or less expensive to invest in. There is some overlap in the types of tasks these robotic arms can all perform. So, choosing the perfect robotic arm for a particular application is all about identifying the critical performance criteria and matching those up with the advantages of one type of robotic arm.