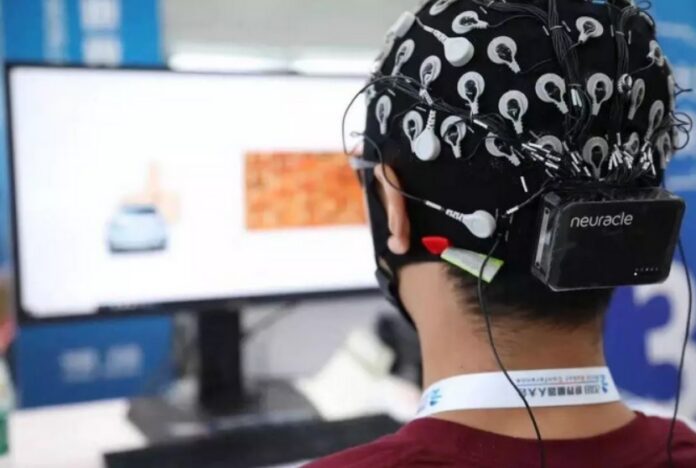 Brain-Computer Interface (BCI) is a powerful communication tool that allows a human to control a computer, peripheral, or other electronic devices with thought. It is a type of assistive technology (AT) that establishes a communication and control channel between users and an external device by using their brain signals (usually a computer).

Using electrodes to detect electric signals in the brain builds a communication bridge between the human brain and the external world. The signals are sent to a computer, which converts them into data that can control a computer or a computer-linked device.

The main advantage of these systems is that they do not require muscular control to manage them from the start. As a result, this technology may be a viable option for people who have lost their ability to move their muscles completely. The most common neuroimaging technique BCIs is electroencephalography (EEG), possibly due to its relatively low cost and high temporal resolution.

The system allows communication between the brain and various machines. It works in three main steps: 1) Collecting brain signals; 2) Interpreting them; and 3) Outputting commands to a connected machine, according to the brain signal received. Brain-Computer Interface is applied to various tasks such as neurofeedback, restoring motor function to paralyzed patients, allowing communication with locked-in patients, and improving sensory processing.

The research community has initially developed BCIs with biomedical applications in mind, leading to assistive devices. The early Brain-Computer Interface applications have targeted disabled users who have mobility or speaking issues. They have facilitated restoring the movement ability for physically challenged or locked-in users and replacing lost motor functionality.

The promising future predicted for BCI has encouraged the research community to study the involvement of BCI in the life of non-paralyzed humans through medical applications. The scope of research has also been further widened to include non-medical applications. More recent studies have targeted normal individuals by exploring BCIs as a novel input device and investigating the generation of hands-free applications.

A BCI system consists of four basic components, signal acquisition, signal pre-processing, feature extraction, and classiﬁcation. The signal acquisition component is responsible for recording the brain waves and sending them to the pre-processing component for signal enhancement and noise reduction. The feature extraction component generates the discriminative characteristics for the improved signal, decreasing the data size applied to the classiﬁcation component. Classiﬁers are translating the produced features into device commands.

There are two types of Brain-Computer Interfaces: non-invasive and invasive. In invasive technology, electrodes are neurosurgically implanted either inside the user’s brain or over the brain’s surface. In contrast, in non-invasive technologies, brain activity is measured using external sensors.

In non-invasive, the sensors are placed on the scalp to measure the electrical potentials produced by various methods such as functional magnetic resonance imaging (fMRI), functional near-infrared spectroscopy (fNIRS), magnetoencephalography(MEG), and electroencephalogram (EEG). This method follows the approach that does not require implanting external objects into the subject’s brain. Thus it avoids surgical procedures.

Magnetoencephalography (MEG) is a non-invasive technique for detecting magnetic fields produced by electrical currents in the brain. Only the superconducting quantum interference device is currently used to acquire the magnetic signal outside of the head (SQUID).

Functional magnetic resonance imaging (fMRI) detects the changes in blood ﬂow related to neural activity in the brain using the device. Thus, it helps map activities to the corresponding brain areas, known as the source localization problem. It depends on the fact that any usage of the brain part requires the increase of incoming blood ﬂow. It employs BOLD (blood-oxygen-level-dependent) contrast, which is sensitive to hemodynamic response. The intensities of BOLD contrast reﬂect the changes in the deoxyhemoglobin concentration in the brain tissue.

Functional near-infrared spectroscopy (fNIRS) is another non-invasive technique that measures blood dynamics in the brain to detect neuronal activity. It determines blood flow using light in the near-infrared range. It has the advantage of providing signals with a high spatial resolution.

The electroencephalogram (EEG) measures voltage fluctuations that accompany neurotransmission activity within the brain to record electrical activity along the scalp. A cap-like device holds the electrodes in place. It has distinct usability benefits over other types of brain signal recording that make it suitable for commercial use. It’s simple to use, portable, and affordable.

In invasive, the sensors are implanted directly into the grey matter of the brain by neurosurgery. The micro-electrodes are placed directly into the cortex, measuring the activity of one or more neurons. The Neural ink device connects to the brain with very small wires. It measures the brain’s neural activity, either intracortical from within the motor cortex or on the cortical surface. Its greatest advantage is that they provide high temporal and spatial resolution, increasing the obtained signal’s quality and signal-to-noise ratio.

The intracortical acquisition technique represents the most invasive method. It is planted under the cortex surface of the brain. It can be achieved using a single electrode or array of electrodes that measure the action signals out of individual neurons. Electrode tips are placed very close to the signal source, and the arrays have to be stable over a long period.

Electrocorticography (ECoG) is another invasive option that involves implanting electrode grids or strips over the cortex surface through a surgical operation. It records the electrical activity of neurons in the embracing area.

Unfortunately, all invasive techniques suffer from a lot of issues. They are prone to scar tissue build-up, causing the signal to become weaker or lost as the body reacts to a foreign object in the brain. The body’s adaptation to the new object, which may fail, can cause medical complications. Problems with implant stability and infection protection can also arise. They can’t be moved to measure brain activity in another part of the brain once they’ve been implanted. Thus the usage of invasive has been restricted to medical applications for a few disabled users. It is usually needed for critical paralyzed situations because of their higher accuracy rate achieved either spatially or temporally.