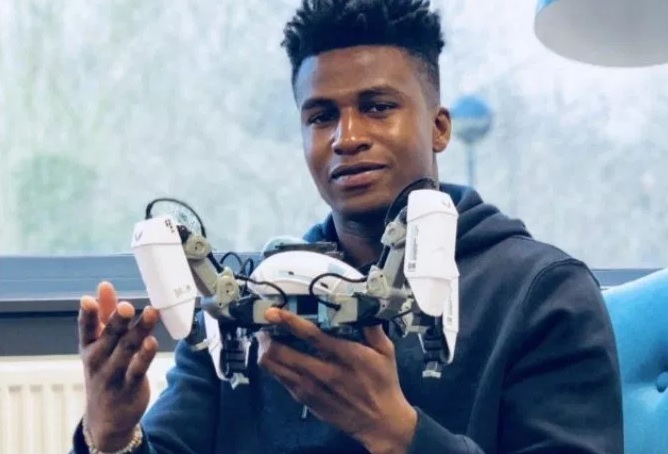 Silas Adekunle, a Nigerian inventor and entrepreneur, known for creating the world’s first intelligent gaming robot, has become the highest-paid robotics engineer in the world after signing a new deal with Apple Inc in 2018.

Graduated from the University of the West of England with a first-class degree in Robotics, this Nigerian-British entrepreneur co-founded Reach Robotics in 2013 with a vision to transform entertainment technology and STEM education by fusing gaming, robots and augmented reality.

The UK-based company developed MekaMon in 2017, the world’s first gaming robot that combines with robotics to bring video game characters to life. A smartphone-controlled robot that uses Augmented Reality to create battlefields, MekaMon has a unique feature to customize the gaming bot to perform custom functions.

Nigerian robotics genius,Silas Adekunle built a gaming machine that became a worldwide sensation & made $7.5m.This attracted a N360m investment by London Ventures,Apple now sells the robotics for $300 a piece,making Silas the top robotics engineer of the world.#ProudlyNigerian?? pic.twitter.com/N6tZlm0hsK

His initial Mekamon launch sold 500 bots, generating $7.5 million. Mekamon’s initial launch sold 500 bots, making $7.5 million. Impressed by the quality of its robots and their ability to show emotion with subtly calibrated movements, Apple partnered with Adekunle. Apple signed an exclusive distribution deal to sell the product in both the United States and Britain. Apple started selling products exclusively online and in stores last November. Apple priced the MekaMon at $300 and sold the “battle-bots” in nearly all of its U.S. and U.K. stores.

He was listed in Forbes 30 Under 30 Europe 2018: Technology. He was also named to the ‘ Top 100 Minority Ethnic Leaders in Technology‘ list of the Financial Times. He was also recently named one of the top ten people under 35 changing the world for better by The Guardian in the U.K.

As if 30under30 Europe wasn't enough! I'm humbled once again to be named as one of @forbesafrica 30under30 in technology alongside so many other phenomenal young and talented Africans. I couldn't make it to Johannesburg for the summit but looking forward to the amazing things we do together. Wishing you all a great weekend! #forbes30under30 #technology #africanpride #theafricawewant