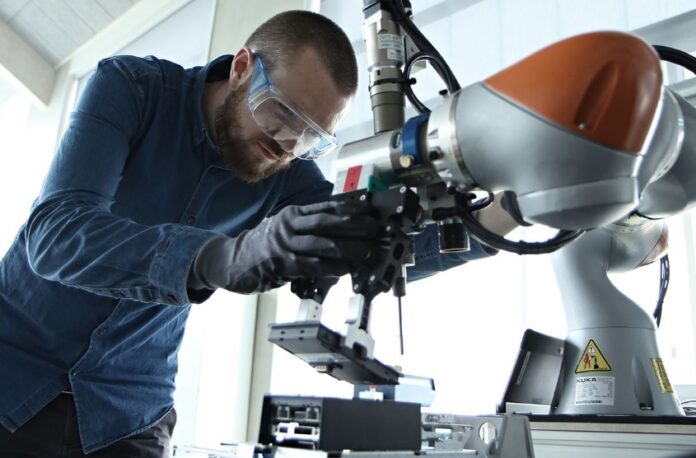 Safety is one of the primary factors in a human-robot collaborative workplace in which the human operators and robots can perform either single or cooperative tasks. Unlike industrial robots enclosed in a cage or guarded with safety equipment, collaborative robots (cobots) operate in the same workspace as humans, reducing floor-space requirements.

To ensure the safety of the human operators who are allowed to move around the robots in a shared workspace, different strategies and technologies have been introduced over the past years.

These strategies have different goals in mind, i.e., limiting the power/force exerted on humans, stopping the operation in a controlled way using proximity sensors, vision systems, force/contact sensors, and applying corrective actions that lead to collision avoidance without halting the operation.

Most collaborative robots are inherently safe by their design, equipped with safety features such as force amplification, virtual safety zones, and tracking technologies. Cobots are generally slower than their traditional industrial counterparts. This is to minimize the impact forces that a human operator would experience in a collision. But it does not guarantee safe operation for every application.

In general, collaborative robots must follow the following safety guidelines:

Let’s now explore some of the safety technologies and safeguarding devices used in collaborative robotics to avoid collisions and limit impact forces to an acceptable level.

2. Safety mats: Safety mats are the most popular safeguarding for cobots and are also the simplest to integrate into applications with low hazards and few additional equipment types. Made of industrial rubber, they are based on compressed air, optical fiber, or electromechanical solutions. The output from the mat is generated when the operator steps on it.

3. Safety limit switches: There are different types of safety limit switches in the market that ensure that a human can trespass the hazardous zone only when the machine is stopped or the risk inside the danger zone does not exceed the measured limits.

4. Safety laser scanner: A safety laser scanner detects an approaching object by optical sensing and sends a stop signal to the machine before the object reaches the hazard zone. For instance, the PHARO safety laser scanner by ReeR, based on time-of-flight-measurement, sends out very short pulses of light. At the same time, an electronic stopwatch is started, and it measures when the light is reflected and received by the safety laser scanner. Based on the time between sending and transmitting, the scanner calculates the distance to the object.

5. Tactile skin: Tactile skin is an artificial skin embedded with pressure and capacitive sensors that can reliably measure contact (pressure) and proximity and limit a robot’s position, speed, and potential impact force to ensure safety.