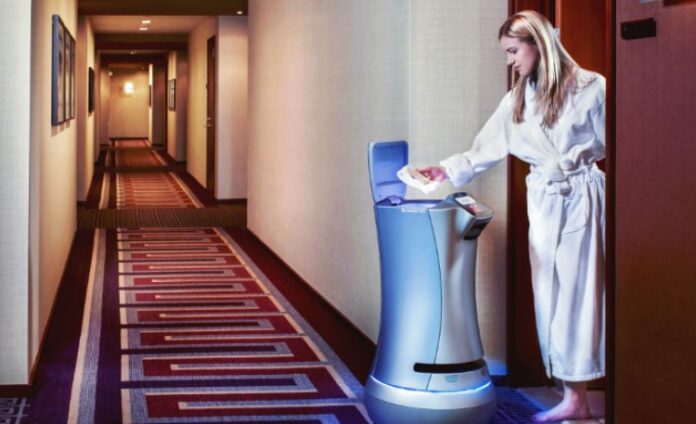 With the rapid development of better, cheaper, and smarter AI and machine learning, robots have become one of the most revolutionary forms of technology used in today’s manufacturing and non-manufacturing environments, including agriculture, hospitals, military, and household.

They can improve operational proficiency at work and accomplish tasks or goals that humans cannot easily achieve but help individuals with special needs and provide convenience and fun in people’s daily lives.

The infusion of robots in the service industry, especially in hospitality, has drawn significant attention from companies and researchers alike. Various service robots have been adopted in different areas of hotel operations, such as front desk, concierge, room service, and housekeeping.

In a frontline service setting, service robots represent the interaction counterpart and are viewed as “social robots” that accommodate customers’ needs and requests. Like other hotel technologies, the adoption of humanoid service robots potentially changes the hotel’s physical layout, ambiance, and service quality. The primary motive for hoteliers to employ robots is to provide convenience and a unique experience to customers and improve operational efficiency at a lower cost.

4. Authors: RodriguezLizundia et al. (2015)
Key findings: Age correlates with the intention to use. A robot’s presence affects social interaction in terms of proxemics, duration of the interaction, and the type of interaction. Active-looking robots better attract hotel users’ attentions.
Major Contributions: Extends the service robot literature to the scope of a hotel environment.
Methodology: Experiment

5. Authors: RodriguezLizundia et al. (2015)
Key findings: Users tend to maintain a personal distance when interacting with a robot. A greeting model in a robot is useful in engaging users to maintain longer interactions. An active-looking robot is more attractive to the users, producing longer interactions than in the case of a passive-looking robot.
Major Contributions: Focuses on the influence over the proxemics, duration, and effectiveness of the interaction, considering three dichotomous factors related to the robot design and behavior: robot embodiment, the robot’s status (awake/asleep), and who starts communication (robot/user).
Methodology: Experiment

6. Authors: Pan et al. (2013, 2015)
Key findings: People are more likely to be interested in dual robots’ greeting and conversation than a single robot’s greeting and soliloquy. Robot’s speech is the main factor that affects people’s response in a hotel setting.
Major Contributions: Helps understand the practical effectiveness of robot’s speech in a public space, inspire the design of hotel-assistive robots.
Methodology: Experiment

8. Authors: Van Doorn et al., 2016
Key findings: The framework and related propositions emerge from consideration of the advances in technology that enable an infusion of ASP into the service frontline will serve as a catalyst for important service research.
Major Contributions: Focuses on the interaction between consumers and such humanlike service technologies.
Methodology: Conceptual

9. Authors: Tung & Law (2017)
Key findings: Robotic navigation is necessary for hoteliers and tourism practitioners.
Major Contributions: One of the early papers that reviewed recent work in the robotics literature and provided future opportunities for tourist experience research in human-robot interactions (HRI). The literature on presence and embodiment that applies to the physical world is considered relevant for real-world tourism and hospitality environments.
Methodology: Review paper

11. Authors: Ivanov, Webster, & Berezina; (2017)
Key findings: There is a big gap in research on robots in hospitality and tourism. Robot-friendliness of facilities would be a new source of competitive advantage for hospitality companies in the future. Investigates how hospitality firms need to design their facilities to make them accessible for robots
Major Contributions: A periodic review of robot adoption in the hospitality and tourism sectors with a discussion of challenges. The hospitality industry should consider what space and design issues it will have to dedicate to the robots that will increasingly inhabit their hotels, restaurants, airport lounges, either as service robots to guests or as entities working to clean the physical environment.
Methodology: Review paper

12. Authors: Osawa et al. (2017)
Key findings: Human work is divided into task units, and that robot actions affect human emotional control.
Major Contributions: A mixed-method from both managers and employees to evaluate service robots in Henn-na hotel. A discussion of the risks and benefits of working with robots in a hotel setting.
Methodology: Interview

16. Authors: Fan, Wu, Miao, & Mattila, (2019)
Key findings: Consumers show varying levels of dissatisfaction with a service failure caused by an anthropomorphic (vs. nonanthropomorphic) self-service machine depending on their levels of interdependent self-construal (high vs. low) and technology self-efficacy (high vs. low)
Major Contributions: This study contributes to the anthropomorphism research and empirically tests how consumers respond to humanoid technology in a self-service failure context. The current study further investigates the underlying self-blame mechanism that leads to varying levels of dissatisfaction among consumers with low technology self-efficacy.
Methodology: Experiment