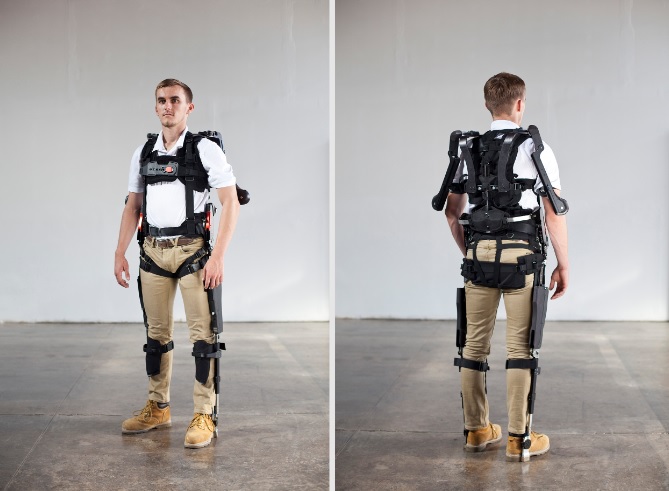 Musculoskeletal disorders (MSDs) is one of the most common conditions among industry workers. Most strain injuries associated with MSDs, are caused by repetitive manual load handling, awkward movements, or positions of the human body while accomplishing tasks in the work environments.

A new technological solution to prevent these workplace injuries and aid workers in manual handling heavy loads is the exoskeletons, also known as wearable mechanical suits or assistive wearable robotics, designed to give users extra strength and increased endurance for repetitive tasks and enabled mobility.

When attached to a worker’s body, an exoskeleton increases a user’s physical performance and mechanical power by applying a power source, such as motors, hydraulics, or pneumatics. They are often called active exoskeletons since they use a power source to move the parts in conjunction with the user. In contrast, passive exoskeletons use non-powered options, such as springs and dampers, to aid the user’s motions and posture.

This post will explore the top 12 industrial exoskeleton technologies available today in the market.

ATOUN is a Japanese based company which produces three exoskeletons: Model A, Model AS, and Model Y. Model A is an active, upper body exoskeleton for the waist and lower back intended to aid users during lifting and carrying objects by driving the thighs and upper body back during bending motions to relieve the waist and lower back. This model weighs 6.7 kg and has an operation time of approximately eight hours. 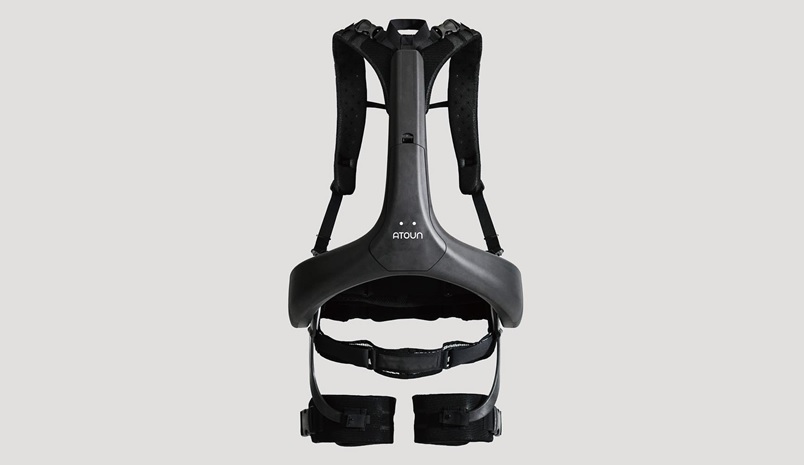 The model AS is an add-on feature for the Model A, which gives extra support for the arms by attaching two belts from the hand to an extra frame piece attached to the back of the exoskeleton over the shoulders. The Model Y is also an active, lower-body exoskeleton intended to lift and carry, similar to the Model A. It is 40 % lighter in weight but only has four hours of operation time. 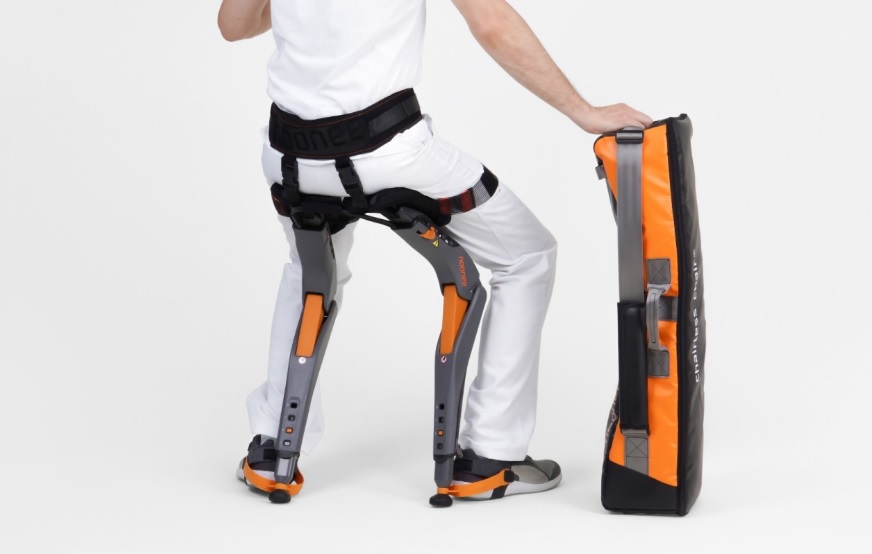 The Chairless Chair by Noonee is a passive lower-body exoskeleton that attaches to the user’s waist, upper thighs, and feet. It consists of two legs running down the back of the legs with a pad at the top under the user’s rear. It can support the user during prolonged standing by acting as a chair, enabling the user to sit at any time. It helps workers who experience less stress physically due to the ability to sit at any time during work.

Exhauss is a French company with six exoskeletons. Three of the four industrial exoskeletons by Exhauss are passive upper-body exoskeletons. One is semi-active, with all models except one having a vest with a frame worn on the upper body and around the waist. 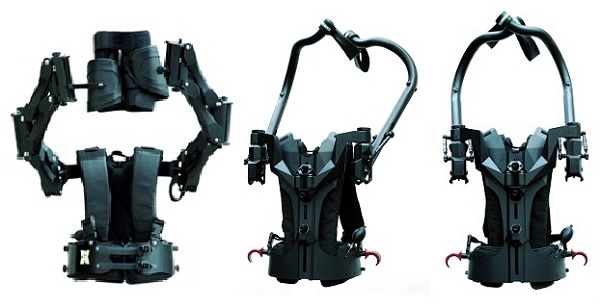 The Model W (Worker) is designed for users carrying tools or loads for longer periods and operates by having the user’s arms attached to suspending arms extended down from the shoulders, which transfers the carrying load from the arms and shoulders to the exoskeletons arms and frame.

The Model A (Assembler) is for users in sitting positions who perform repetitive tasks and motions and operates by having two mechanical arms extending from the chair to the side and attaches to the user’s arm, relieving the users’ arms and shoulders.

The Model T (Transporter) is intended for load, and heavy tool carrying and operates by having one mechanical arm extending from the frame on the back to the front for tools to be attached to, relieving the user from carrying the tools.

The Model H (Hanger) is similar to the Model T, with the intent to carry heavy tools for longer periods, relieving the user’s arms and shoulders. The main difference, except design, between the Model H and the Model T is that the Model T uses a passive spring system to counter the arm’s load. Model H uses semi-active air pneumatics to counter the load. The user manually pumps air to the cylinder actuator.

There are two other models by Exhauss: the Model P (Pickers) intended for repeated arm motions, and the Model C (Cine-maker) intended specifically for carrying cameras and to increase steadiness when operating the camera. 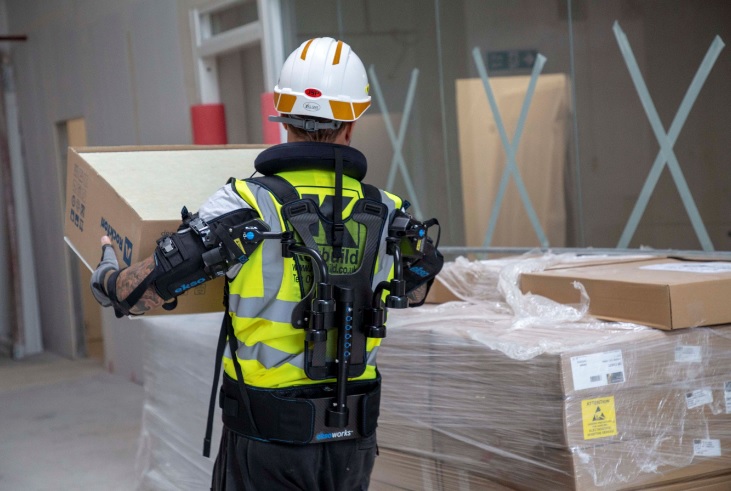 EksoVest, by EksoWorks, a part of Ekso Bionics, is a passive upper-body exoskeleton for elevated arms tasks. The exoskeleton is attached to the upper arms and lower back, which transfers the load of the arms from the shoulders to the frame on the back during overhead work tasks. It can decrease 80 % of workplace injuries, discomfort, and muscle activity in the shoulders. 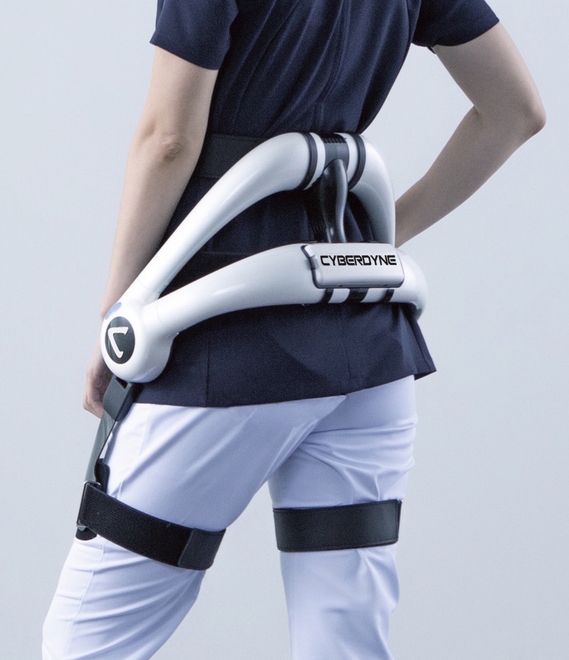 It is a non-medical exoskeleton model by Cyberdyne for labor use. This active upper-body exoskeleton for the lower back and trunk region is designed to support the user during bending and lifting tasks as the hip’s mechanical joint helps to re-extend the hip by actively applying force to the front thigh pads.

Hercule by French company RB3D is an active lower-limb exoskeleton to aid during walking, squatting, and carrying loads. The Hercule has two mechanical legs extending down from a platform-like hip structure, down to two-foot plates. 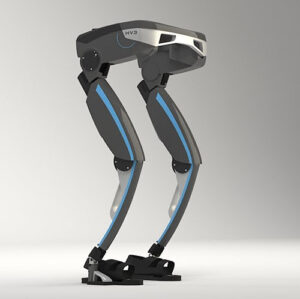 The users enter the exoskeleton from the platform’s open back and wear a vest attached to the platform, which also has a strap around the waist attached to the user. The user also attaches the feet to the footplates at the end of the legs. The Hercule can carry loads up to 40 kilograms, have a max walking speed of five kilometers per hour, and has an operation time of four hours. 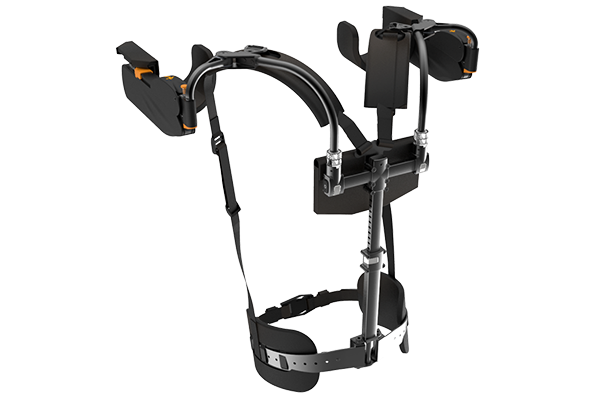 Worn on the upper body with shoulder padding and straps around the waist, with attachments from the shoulder intended for the upper arms, the Airframe transfers the users own arm weight from the upper portion of the body (the shoulders, neck, and back) to the user’s body core. It lowers exertion levels up to 80 %, boosts productivity, improves working quality by reducing muscle stress and fatigue, and limits exposure to musculoskeletal disorders. 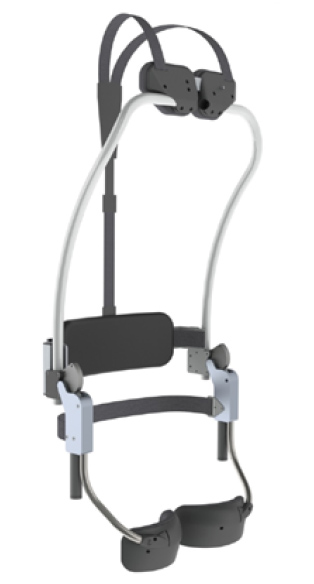 The Laevo is another passive exoskeleton that aids users during forward-bending tasks and prevents back injuries by transferring the user’s upper body weight through a chest plate and transferred by a metal frame down to the user’s legs. Currently, Laevo offers its latest version named the Laevo V2 and is stated to reduce the stress to a user’s back by 40 %. Laevo can benefit a user in terms of muscle activity, endurance, and comfort.

The FORTIS exoskeleton by Lockheed Martin is a passive, semi-full body exoskeleton. It is designed to support users by attaching heavy tools on a third arm and relieving the user’s upper body from carrying tools for longer periods. 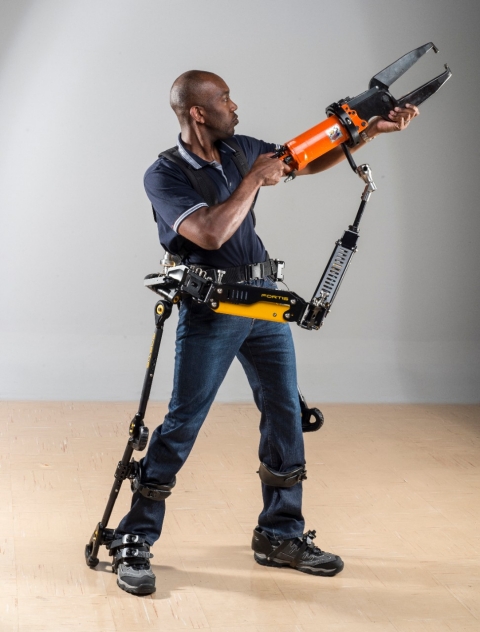 Attached to the lower body around the hips, it has a mechanical arm attached at the hip for heavy tools to be carried and used with ease. The FORTIS transfers heavy load from the mechanical arm and to the ground while either standing or kneeling. The FORTIS exoskeleton reduces muscle fatigue and boosts productivity by increasing work rates 2 to 27 times higher.

The Muscle Suit by Innophys is a multi-model upper-body exoskeleton for the waist and lower back to aid during bending and lifting tasks by assisting in the re-extension of the waist when bending. Each model uses a type of actuator called McKibben pneumatic artificial muscle. 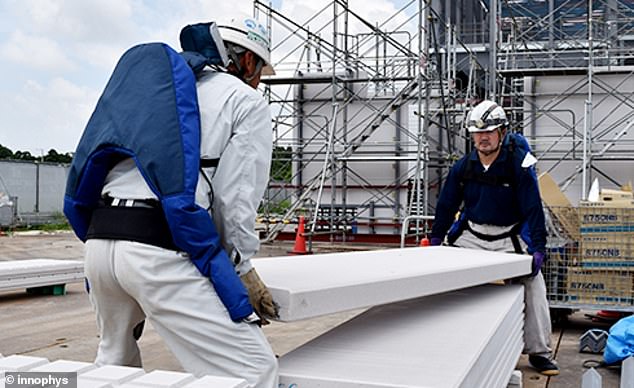 The second model is a lighter version of the standard model, with the same two types of active versions, but with two actuators instead of four and a smaller high-pressure tank for the tank version. The third model is the semi-active “stand-alone” model with the same design as the standard and light model. Instead of a pressure source, it has a manual pneumatic pump that allows the user to fill the two actuators with an adjustable amount of air depending on the assistance needed during tasks. Pictured below are three models of the muscle suit.

The BackX supports users during lifting, bending, and reaching by transferring loads from the back to the thighs. The LegX is suitable for tasks that require squatting repeatedly or for longer periods. It features a “chair-less chair” setting, which allows the LegX to be in a fixed position holding the users’ weight when squatting down to a specific height.

The ShoulderX transfers the loads in the arms and shoulders during arm elevated working tasks to the users’ hips where the frame of the exoskeleton is fitted. As mentioned, the MAX is a combination of all three individual SuitX exoskeletons. 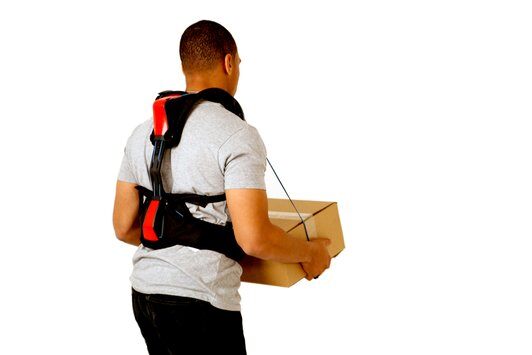 US-based Strongarm Technologies has two versions of exoskeletons: the FLX and the V22. Both are passive upper-body exoskeletons designed to support users during bending and lifting tasks. The design is in the form of a back brace ranging from the lower back to the shoulders. The difference is that the V22 features two cords extended from the device, which attaches to the users’ hands, which during lifting of objects, transfer the loads from the arms to the cords.