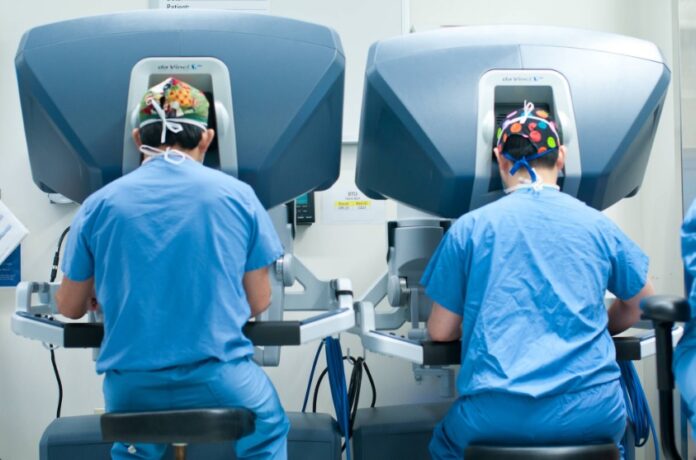 Robotic telesurgery is an emerging surgical system that utilizes wireless networking and robotic technology to allow surgeons to operate on distantly located patients.

The world’s first telesurgery was conducted in 2001 by a surgical team in New York using the ZEUS robotic system. It became a successful two-hour-long laparoscopic cholecystectomy on a female patient at a hospital in Strasbourg, France. The patient had an uneventful recovery. Since then, there have been numerous technological advancements in telesurgery.

In 2014, the world first saw the launch of novel technology, Virtual Interactive Presence (VIP), that allows remote neurosurgeons to collaborate with a shared 3D display via high-definition binoculars. This real-time visual system enables the surgeons to view a merged surgical field display of each other’s hand motions.

Researchers carried out successful pterional and suboccipital craniotomies and microscopic approaches to the pineal gland on a cadaveric model using VIP, which turned out to be applicable not only in surgical patient care but in surgical training, allowing for a profound real-time interaction among surgeons at different medical centers from around the world.

A major problem with telesurgery is the latency time, which is the time delay in transferring auditory, visual, and even tactile feedback between the two distant locations. The ideal latency time is less than 100 milliseconds, and a latency time greater than 300 milliseconds produces major inaccuracies in instrument handling.

Increased latency time is mainly attributed to network routing problems and congestion, and server overload. The time delay generates a lengthy operation and produces significant surgical inaccuracy, which can risk safety and delay the patient’s recovery.

Although a latency time of fewer than 100 milliseconds is achievable with today’s high-speed fiber optic cables and a dedicated asynchronous transfer mode (ATM), technicians must be present during the surgery to maintain this speed. Interestingly, researchers studied the effects of latency time training, and they found that a degree of inaccuracy from a time delay can be overcome via training the teleoperator.

The conventional telesurgery system had another major drawback in that it failed to provide tactile information and the operator solely relied on visual feedback. The technology that enables the transmission of tactile information to the teleoperator is termed “haptic feedback.” This is an important feature of a wireless robotic surgical system because it allows the surgeon to feel the consistency of the tissue and the tension within the sutures, which prevents damage to the delicate tissues or suture tearing during the procedure and boosts the surgeon’s confidence.

The first telesurgery prototype with haptic feedback technology, named Telelap Alf-x, was introduced in 2015. It reduced the average time of experimental cholecystectomy by 60 minutes. This system was also equipped with an eye-tracking technology, which halts the movements of the robotic arms when the operator’s eyes are not fixed on the screen and provided an added cost-effectiveness by using low-cost reusable parts. In 2017, a new MRI-guided telesurgery system was introduced, which can perform percutaneous interventions and provide haptic feedback to the operator using varying degrees of pneumatic pressure.

Other factors that prevent the implementation of telesurgical technology in today’s clinical setting are as follows: