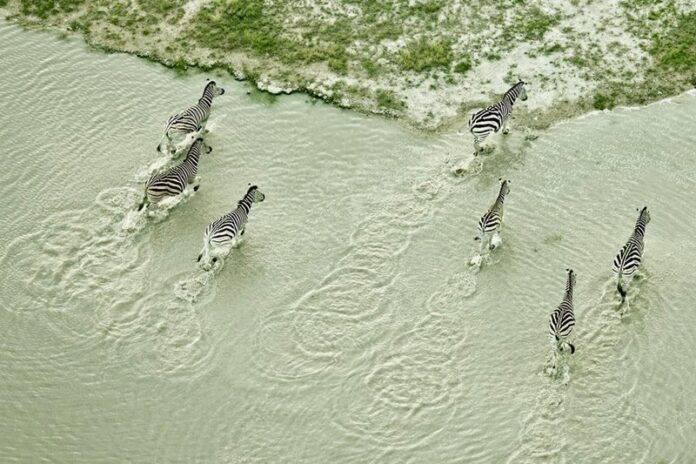 Drones or unmanned aircraft (UAV) are, in fact, underused technology in wildlife management, despite the wide range of potential applications. However, drones are an emerging tool to provide a safer, cheaper, and quieter alternative to traditional methods of studying marine megafauna in a natural environment.

They have numerous advantages in wildlife monitoring and nature conservation since they are cheaper than manned aircraft. They can be operated on the spot and at lower heights and sound, and their use is independent of daylight.

Luckily, drones are currently being tested across the globe for counting wild reindeer in the open mountain habitats and ungulates in pine and beech forests in countries like Poland. As technology develops and the market increases, drones become affordable for wildlife managers, landowners, and other stakeholders involved in wildlife management.

Drones with relevant sensors can address the technological challenges facing conventional techniques. This technology can circumvent obstacles while flying, provides room for altitudinal adjustment, and is increasingly becoming a promising conservation tool in ecological monitoring. The technology has the potential for quicker deployment than satellites or manned airplanes. It is also useful for wildlife species that are sensitive to ground survey techniques. The UAV-based data provides useful insights for timely management responses and can greatly supplement the conventional techniques used in wildlife-based researches, ecological monitoring, conservation, and management practices.

It is not the drones themselves but rather the cameras mounted on the drones that determine the usefulness. To monitor homoeothermic animals, thermal infrared cameras (TIR) that register heat emitted from the body can be more successful than optical cameras (RGB) that record the light reflected by the body, especially if the species is elusive hard to optically distinguish from the surroundings.

Detection success using TIR depends on flight height, camera angle, temperature and humidity of the surroundings and the atmosphere, the skin/hair temperature of the animal, and its behavior and selection of habitat.

For vegetation surveys, multispectral cameras that, in addition to RGB, measure near-infrared NIR are useful for estimation of, e.g., the normalized difference vegetation index NDVI to capture information about live green vegetation biomass of a given plant or vegetation plot.

In agricultural vegetation mapping, pictures must usually overlap around 70 % to create high-quality maps. Changes in light conditions during data collection can cause serious errors to vegetation maps, often seen as stripes on a map, and must be considered during data processing.

Drones include various types and sizes of equipment, from only a few hundred grams to thousands of kilograms. The military use of UAVs has been the driving force for technical development for a long time. Still, especially during the last decades, agricultural, meteorological, and nature resources-related users have started to utilize UAVs more and more.

The most suitable types for nature conservation and wildlife monitoring are multi-rotor drones and fixed-wing drones. Multi-rotor drones offer the possibility for vertical take-off and landing with good data accuracy because of the ability to control the position and orientation of the camera precisely. Limited speed and flying time restrict their use in wide-area monitoring. Fixed-wing drones have longer flight times due to efficient power use, and they are usually flown higher than multi-rotor drones to cover larger areas at the same flying time. Downsides are their inability to hover without movement at one spot, the need for a runway or catapult at take-off, and specific landing equipment such as a parachute. Both types can be programmed to follow specific pre-determined flying routes.

Recent developments in drones, artificial intelligence, and miniaturized thermal imaging systems made it more flexible, affordable, and accurate for aerial surveillance of ungulates. It has been estimated that the UAV-based survey of 100 ha large territory is ~10 times less time-consuming than analogous surveys based on traditional field visits. By reviewing different studies, researchers have concluded that drones count wildlife more accurately and precisely than humans.

However, in most cases, animal counting from aerial surveys is still performed manually, the need for automatization of data processing is visible. Automatization could also help use different monitoring systems reliably, as nowadays, manual counting can significantly reduce population density results. In Australia, macropods (kangaroos) were counted in both helicopters and drones with optical cameras, and as a result, the drone offers much lower macropod density versus helicopter (3.2 vs. 53.8 animals km2 respectively). Research gap analysis on African swine fever performed by the European Food Safety Authority (EFSA, 2019) has identified drones (especially those equipped with thermal cameras) as an important data source.

UAVs have become increasingly popular tools for wildlife research; research gaps and challenges have been identified in several review studies. Researchers reviewed drone applications for conservation in protected areas, highlighted potential challenges that can help guide future research in the field, provided a brief classification of platforms according to characteristics and application, and an overall overview of sensors and devices coupled to drones.

They have also collected recommendations on observing strategies for monitoring animals using UAVs equipped with thermal cameras. Early morning is recommended for thermal surveys due to the maximal contrast between the target object and background.

However, the main challenges of the UAV thermal-data-based method are the difficulties in species identification due to the relatively low resolution of thermal cameras, regulations limiting drone operations to visual line of sight, and high dependence on weather.

There are many challenges associated with the applications of drones in different habitat types for mammals as individuals, single species, or groups of many species at the same time.

The recent emergence of drone technology and its civilian uses have sparked legal and ethical regulatory authorities in many countries. The permit requirements, including the visual line of sight (VLOS), reduce effective uses of the UAV in environmental and conservation research works. There are legal and ethical considerations regulating its use, depending on five key aspects: the type, size, intended use, geographical locations related to restricted areas, adherence to specific legal or administrative procedure, human privacy, etc. Accordingly, acquiring permits for flying drones in most countries takes much time due to the substantial restrictions.

The application of small drones does not need sophisticated skills. Still, necessary technical skills are inevitable to ensure safe drone operations and image processing to generate data in fulfilling pre-determined ecological monitoring objectives. This includes appropriate flight mission planning and executions. Other technical challenges associated with drones include power limitations and low flight time aspects that can affect their performance.

Various weather conditions are the next big challenges, and they have different levels of impact on drone flight performance. For instance, cloud cover, haze, fog, and glaze cause moderate impact, while wind and turbulence, temperature, rain, humidity, snow, and solar storms cause adverse impacts. Severe impacts on drone performance are mainly caused by hurricanes, lightings, halls, and tornadoes.